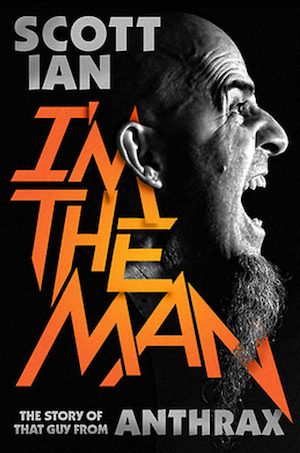 Let me explain by sharing the central role that Scott’s played in my life.

If it wasn’t for the mild-mannered guitarist and leader of Anthrax, I wouldn’t have discovered and grown to love heavy metal. It’s that simple.

As a teenager honed on indie rock and hip-hop, I couldn’t go a day without listening to Public Enemy. Chuck D was my prophet – a voice of righteousness and truth, backed by the fiercest music imaginable – and Public Enemy’s record Apocalypse 91… The Enemy Strikes Black was one of my Bibles.

The Public Enemy-Anthrax “cover” of PE’s 1988 jam “Bring tha Noize” concluded that record, and new soundscapes rang through my unbelieving ears. Scott and Anthrax’s razor-sharp riffs and general heaviness had made the PE classic more intense, more satisfying, and more dangerous – so much so that I was soon spending all my record-buying money on Anthrax, Metallica, and Slayer discs.

What you just read might read like a self-indulgent preamble to a self-indulgent review. But that’s not its point. What I’m trying to get at is that Scott Ian’s new autobiography (which he wrote in collaboration with celebrated metal journalist Jon Wiederhorn) – I’m the Man: The Story of That Guy from Anthrax (DaCapo) – succeeds brilliantly in reminding music fans the essential role that Scott and the rest of Anthrax have had in their lives.

Hyperbole? Far from it. Reading I’m the Man is like spending a couple days with Scott, who comes across not only as one of the foundational members of thrash metal but also as the leader of a band that remained innovative and, to quote the title of an album by a band with whom Anthrax toured, far beyond driven, even when turmoil in every form imaginable threatened to end it.

I’m the Man isn’t a typical rock star autobiography. Although it has its share of hilarious stories of drugs and partying (see the sections on Scott’s escapades at the Yankees’ spring training facility, touring with Pantera, meeting Gene Simmons, hanging out with Al Jourgensen, and goofing around with Metallica), the book refreshingly focuses on the guiding light of Scott’s life: music and, in particular, the music of Anthrax.

Before reading I’m the Man, I knew Scott was special, but I didn’t know just how special. The man’s humility, determination, and positive attitude make him into a natural leader of a band that, as you read the book, seems like for much of its career, feels like its on the verge of implosion. The book is a thrilling ride through the ups and downs of being in a rock and roll band.

In other words, it was Scott – along with the support of the other core members of Anthrax, drummer Charlie Benante and bassist Frank Bello – who kept the Anthrax ship sailing, through lead singer changes, lead guitarist changes, record label problems, studio fires, untimely deaths of friends (the section on the death of Metallica bassist Cliff Burton is one of the most moving in the book)…you name it.

It’s Scott’s optimism that holds Anthrax together. It’s also his Zen-like acceptance of everything that’s endangered Anthrax that allows the band to move on.

And that’s saying something. Scott’s infectious commentary on some of the records made during the period when John Bush was the singer – records like 1993’s Sound of White Noise and 1998’s Volume 8: The Threat Is Real – will inspire you to revisit some of Anthrax’s most critically maligned work from a new perspective.

Scott’s words will also make you appreciate all the more crucial Anthrax records like 1985’s Spreading the Disease and 1987’s Among the Living. After reading I’m the Man, you’ll understand the hardships that Anthrax had to endure to make these thrash classics. And you’ll realize that 2011’s Worship Music, which like the above-mentioned LPs features the lead vocals of Joey Belladonna, may be of their ilk.

Moreover, I’m the Man will give you a greater understanding of how the Big 4 thrash bands – Anthrax, Megadeth, Slayer, and Metallica – somehow managed to change the course of heavy music, steering it away from the hair metal of the 1980s through sheer hard work, will, and perseverance. Scott’s discussions of Metallica, which recur throughout the book, are particularly revealing.

Scott Ian really is the man – and you’d do yourself a disservice by not reading his thrilling autobiography.