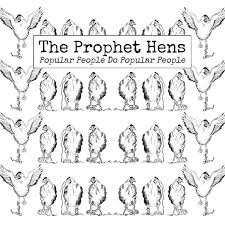 In 1806, in the already-bustling industrial town of Leeds, one Mary Bateman claimed ownership of a rather talented hen, one that was squeezing out eggs inscribed with the message “Christ is coming.” A canard, of course, if a clever one – our Mary had herself been scratching the prophesy in acid on the eggs then, um, shoving them back up from whence they came. The prized fowl, whose actual name has been lost in the long chicken run of time, came to be known as The Prophet Hen of Leeds.

In 2013, in the bustling pop-factory city of Dunedin, Fishrider Records has just released an album by four rather talented young musicians that also brings a message of hope to the teeming masses. And, though it’s most definitely not a hoax, it also betokens a second coming of sorts, in this case of the (continuing) rise and resurrection of the spirit of Kiwi pop, circa 1985.

Gestated by guitarist/singer Karl Bray during a period of recuperation from a broken leg – suffered while scarpering over a 12-ft. fence to escape a band of menacing thugs – Popular People Do Popular People will induce a woozy case of bat chills from the very off. One of the hallmarks of the world-famous Dunedin Sound® is the uncanny ability the guitars have to sound both bold and delicate. ‘Chime’ has historically, inevitably, been the word of choice in the countless glowing reviews over the past thirty years and while it’s unerringly accurate it somehow misses how articulate that sound is. Here, as has been the case with his forebears, Bray’s tone seems cut out of sheets of sunshine – or a glistening rain – by an X-acto knife, and yet what flows from inside the headphones is more a gently serrated effect, you’re serenaded, the bright is breaking through the veil of mist and regardless of whatever else you’re facing at the moment you can’t help but feel optimistic. A bit impressionistic, I realize, but it’s what this music, this sound from down under Down Under, begs for and in fact forces, to find a way to explain its magic. In the end perhaps it’s impossible and so we content ourselves with bobbing along its impermeable surface, certain of at least this one thing: this is music for cynics to rise above themselves to, and the Prophet Hens carry that tradition with aplomb, with élan, with grace. Listen up.

From the pastoral romp of opener “High Times” – you can feel the early summer warmth of the clearing in the forest – to the sparkling minor-key hypnotism of “Red Blonde,” with its singalong poignancy and rippling drone, PPDPP garlands itself around your consciousness with easy-going melodies strung through unfussy arrangements and if that gives the impression it all sounds effortless that’s because it does. But we all know ‘effortless’ isn’t, and in fact requires a particular rigor, that ‘easy-going’ doesn’t come easy and that ‘unfussy’ only gets that way by being fussed over, usually meticulously. Looking closely, one finds more than a touch of genius in the Prophet Hens’ apparent laissez-faire, of a type that won’t be unfamiliar to, say, Camera Obscura fans.

Early single “Pretty,” aside from its self-describing title, is ‘gem’ written large and liquid, pouring into your ears over a power-punch drum and step-down bass pattern (Sefton Holmes and John White, respectively, and I want that drummer’s first name) that sways you in its favor even before Bray drops in with his ringing chord and tastefully plucked picking. Buoyantly reflective in tone, the song is a jewel of ensemble playing and sings its own praises with such unobtrusive immediacy it instantly lands itself in the Dunedin Hall of Fame (and if no such thing exists then the good citizens of that fair, bay-hugging city should think hard about electing a new council). As is always true on tracks bound to have ‘classic’ stamped on them, everything adds up, from the bold to the barely noticeable. The prettified, fragile melody hung on that massive bass and drum hook, well, all that’s right there in rich technicolor, whereas it might just be the way Bray’s lines hang over the whole gorgeous goings-on beneath them like so many moss-heavy boughs, or the feather light harmonies keyboard player Penelope Esplin layers on during a spellbinding middle eight, that guarantees the song’s inclusion on God’s own mixtape. Who knows. As I said, this stuff’s magic and what am I doing trying to explain magic.

Funny thing is, though, “Pretty” may not be the best song on the record. At the very least it has to contend with the more epic-sounding, if similarly bass-and-drum (and, this time, crucially, keyboard-) dependent “Easy As The Sun.” Gifted with a post-punk throb – White seems to think he’s wandered into an audition for a Stranglers cover band – and a suspended guitar figure that’s drifted over from a lonely desert outpost somewhere, strung along with an insidious drum pound that drops you instantly into a 20-year-old’s adrenaline rush, the song pushes the needle on the thrill gauge to a level somewhere between the Kiwi Feelies and a post-Factory Mancunian Verlaines.

Of all the luminous predecessors from their modest coastal city that the critics will lay at the pedals and tapping feet of the Prophet Hens, the Bats comparisons will be most numerous. They’ll also be the most deserved, as tracks like “All Over The World” and “Green Blades of Grass” do clone recognizable strands of DNA from the Robert Scott outfit – beginning a song on an emphatically delicate downbeat, building tracks on a cascading linear structure – but aside from the prevailing response being one of ‘Sounds like the Bats? I’m in!,’ it’s difficult to see it as a problem, really, and even if it is an issue it’s mostly one of cadence. Indeed, it’s in those instances when the Hens open up a measure of space in their songs that one most keenly hears this young band finding the unique timbre of their own young and unique voice. It’s there in “Pretty,” it swoons us in “Easy As The Sun” – the way Penelope’s organ hovers during the last break, you’ll have to catch your breath – but quite possibly finds its strongest expression in album-closer “Red Blonde,” a mid-tempo, bittersweet coda, Bray’s vocal displaying a yearning strain, reaching up a notch in his register while Esplin supplies ghost harmonies and the whole band locks into a groove of tumbling restraint. It’s not only a fetching, tone-appropriate note on which to finish things, it’s also, more to the point, Prophet Hens-specific.

Having grown up in an environment that effectively amounts to an ongoing, sprawling, city-wide School of the Melodic Arts, the Prophet Hens are writing their own theses of pop, drawing on the wealth of ecstatic research that has preceded them. As incoming freshmen they already show such promise that the first etching strokes of their name are being chiseled into the Grand Alumnus Hall of Dunedin, which is surely located somewhere up on the misty flanks of Mount Cargill, or maybe out in The Kilmog.