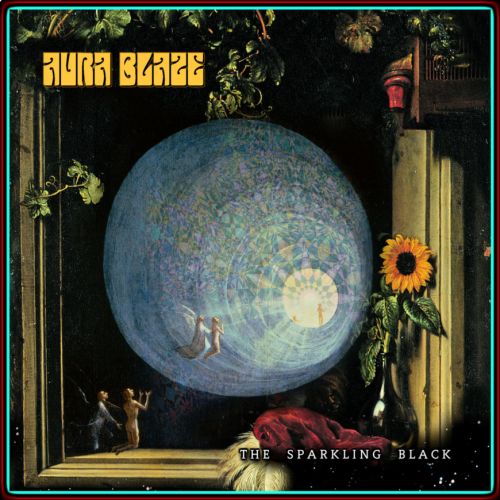 Aura Blaze is the music project of Rhode Rachel. He not only composed the music and performed all instruments on The Sparkling Black, but produced it as well in true independent spirit. The LP was mastered by Greg Calbi at Sterling Sound in Edgewater, New Jersey.

Focusing on traditional rock from the ‘60s and ‘70s, the multi-instrumentalist Rachel added his own reflective and euphoric glow to each track. He’s inspired by classic acts like The Doors and Pink Floyd, and more modern psychedelic revival bands like Tame Impala and The Black Angels.

The songs on the record are melodic and nostalgic, founded in guitar-centered pop, but bolstered many times with orch-pop touches and warm and sunny vocal harmonies. The tracks emit a radiance that fits well with the album’s release date on the summer solstice.

Jangle popper “Good While It Lasted” is brisk and springing, bursting out with strummed guitar, woodwinds, strings, and Rachel’s enthusiastic vocals. The mellow, but trippy “Eyes On The Rising Sun” employs vintage organ notes and hazy vocals.

“No Soul That Couldn’t Be Sold In Hollywood” grooves with a funky ‘70s disco flow and features a cheekily silky vocal tone from Rachel. The title track bites with crisp rock crunch, weighty guitar buzz, and mystical, foreboding vocals.

Time to take a sonic trip and get blissed out by Aura Blaze as the temperatures rise and the sun shines down on us all.

Find out more about Aura Blaze: