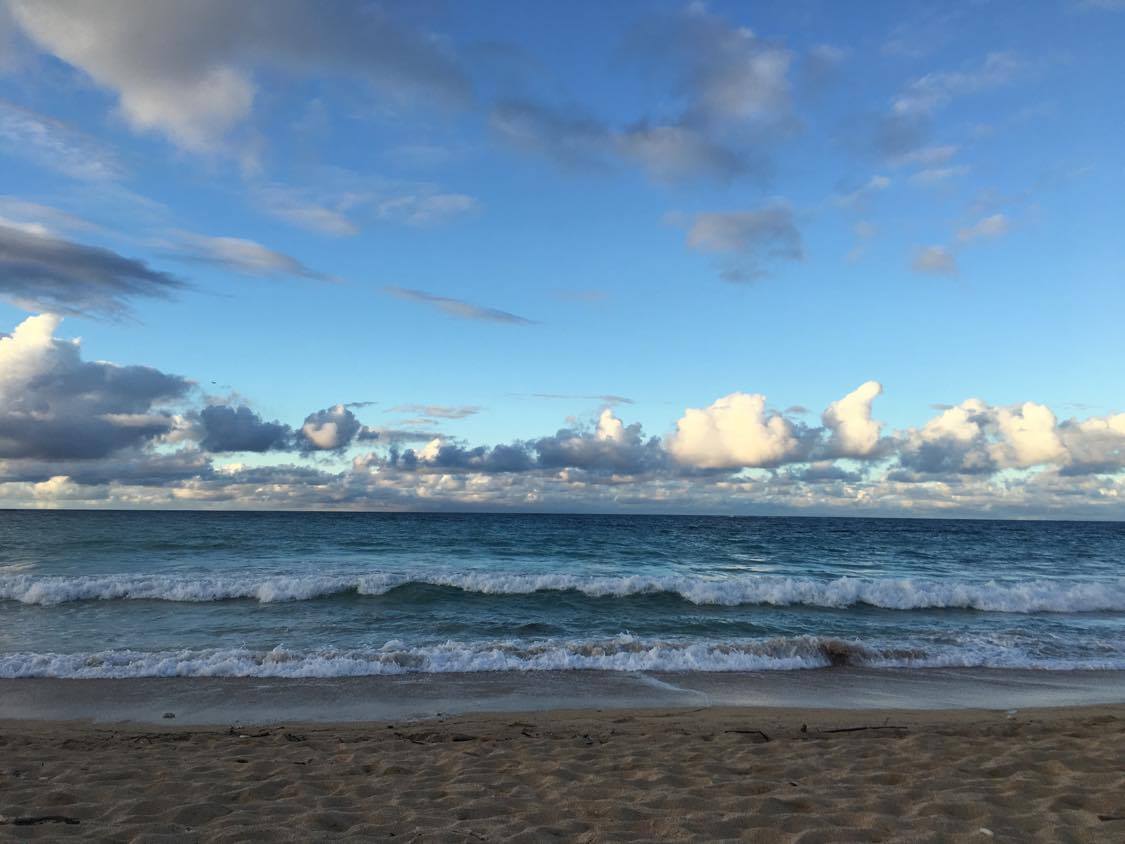 I don’t know why I never tried to surf before.

I grew up on the soft sand of Laguna Beach. After a long day squinting into sun-reflected sea as a baby, my mom would change my diaper and find a gram of sand in the mix, which I’d consumed between sandcastle builds and beach blanket naps.

Having gone through my digestive tract on multiple occasions, I probably still have traces of that earth in my cellular structure.

A child of the beach, surfers were part of the periphery of my life. Like gulls and seaweed, they were a painted-on fundament of the landscape.

So why didn’t I ever think to try it?

Probably because I was a girl, and waves felt dangerous.

Instead, in 8th grade I learned to skateboard. I guess gravel seemed safer than vast, dynamic crashing water… more controllable, more accessible, too. Brittney McCall and I would take our Sector 9 concave pintails to the biggest, steepest hills in our homogenized gated community, hike to the top and make our way down, a bit faster than any mother would have liked. But we had our helmets and more sense than most boys, so they let us go. Until I got a bit cocky one afternoon, lost my balance on a long and gradual descent and knocked myself out on a curb. I lost a brackett on my braces and plenty of blood. Twenty years later, I still have a small cleft in my upper lip, where my face met moving street.

I never tried to surf, but I tried other things I imagined other people found scary. I’d walk cities alone at night, even the strangest, darkest pockets — Florence, Rome, San Francisco…and each time I’d come out unscathed. After walking back to my City Center apartment alone, through the Tenderloin, the Mission, Market Street— I’d revel in my good fortune and untouchability. A lone, dark-haired girl — some might say who was asking for it.

Taking strangers home never resulted in anything unwanted. A balanced mix of Ativan and IPA kept me warm and safe, regardless of external circumstances. I may have blacked out 15% of the evenings in my 22nd year of life, but I’ll never know. That thought oddly makes me smile. What happened those nights? I guess I’m a stranger even to myself as a significant percentage of an already murky chapter is unknown to me.

The dark waters eventually ran clear. Or clearer. Still, surfing would have been an easier thing to undertake.

In 2010, I went to rehab. I dried out, emerged from the drunk bunker of my brain which was beginning to ferment. I saw people and things like they were new. I slowed down. The whites of my eyes became white again, and I started reading books. I started telling the truth. Stopped manipulating. Stopped hating myself. Stopped the Russian roulette of unnecessary, dumb danger.

I found yoga. Found love with my best friend. Found a job. I moved from one coastal town to another. Corona del Mar, to Costa Mesa, to Dana Point, to Long Beach, and finally, to Santa Monica. With the friend I would marry.

We all are mirrors, if we are willing to look. But to be legally, morally bound to one…now, that’s dangerous.

But something in me knows he’s a perfect pairing for me. We have accepted each other in our most despicable states, encouraged each other through individual and mutual flames and bogs, sometimes carrying the other.

Surfing would have been safer.

It took me 33 years to find myself on a board on my coastline for the first time. What made me say, I want to try that, I’ll never know. What makes you suddenly recognize that beautiful tree you’ve passed by all your life and have never seen? What causes you to discover the pocket in your jacket you’ve worn daily for a decade or the fact that your dad’s eyes are actually green, not blue?

Many girls surf now. That made it easier. One girl is my friend, Tara. I took some photos of the jewelry she designs, and as a trade, she taught me how to surf.

I zipped up the wet suit. No, Tara zipped it up for me. I now realize it was about a size too snug. I velcroed the neck. Carried the Wavestorm her ex tried to mask — blue and white stripes exposed beneath worn patches of black spray paint. Light foam revealed from scuffed sides, a bit of Sex Wax molded to the white underbelly. This was my board. She would later give it to me to keep.

We walked barefoot through Doheney’s parking lot, past families, other surfers, dirty cars. Tara scoped the waves. I stood next to her, felt excited and proud. I could not believe I was doing this. This thing which has been so close but never saw as an option.

She showed me some things on the sand. We realized I’m goofy. Who’d have thought? We dropped our boards into the water. I walked out, deeper, deeper yet. This was what a wetsuit felt like. I should have been cold but I wasn’t. I was warm and safe, regardless of external circumstance.

We paddled out, a small wave crashed and I pressed my weight upon the board, my body upward. Upward facing dog finally served me. One wave overcome. Another. And another. Turtle dive under a bigger one. White wash, disbelief…I’m doing this.

Past the break, we reviewed what she taught me. I’d go over it in my mind, and when she told me to paddle, I’d paddle, and when she said POP UP, I’d pop up…

I waited. On my stomach, even after years of yoga, my back didn’t bend like that. There was strain in my neck and lumbar. Upper back immobile. But I faced the shore, looking over my neoprene shoulder to see what Tara saw.

I saw surfers in the distance, waiting like me. I saw a pelican nose dive, so much closer than what I’d ever witnessed on land. I saw the sea moving, gentle, a perfect wave suddenly caught by a beautiful teenage girl with a pristinely dry bun in her bikini.

Suddenly, the horizon disappeared behind a swell of green-blue. Tara yelled “Paddle Paddle Paddle!”… and I did. I paddled. “POP UP!” she yelled… And in one split second, I felt the muscles in my upper half working. I saw moving water over my shoulder, I saw the beach, tiny figures, sideways, board, white. The squeaky feeling of hard foam slipping from my foot and my hand at the same time. Then, no sound. Just silence. Gravity pulled me sideways. Centrifuge pulled me back. Suddenly, eyes closed, I received the sinus clearing of a lifetime as half a wave went up both nostrils. The tug of the board, now feet away, pulling on my ankle. I was submerged fully. Power of water kept me down. I surrendered. I’d come up eventually.

I came up with the biggest, dumbest smile of my life. I came up knowing what falling for a reason felt like. I came up understanding, just a little, what surfing meant, and why it was worth a bit of danger.

There is something here that is unsayable, so I won’t even try to say it, but that night, I dreamed of the water. I felt my body on that board in the warm light, on the surface of this planet and something in me settled, something found its place.

Surrounded by fear, there is no way to know what one truly wants.

Slowly, slowly, peel back the dried clay, and you’ll see what matters.