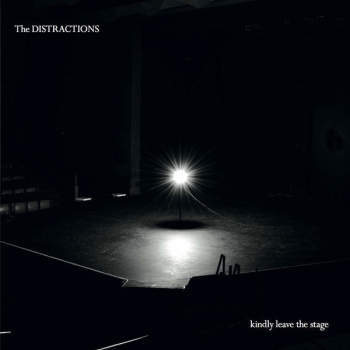 To the extent there’s a code of ethics in this music writing life, some sort of tacitly agreed-upon guide that helps us decide what records by which bands we should or shouldn’t consider for review, I should almost certainly, in this instance, recuse myself. Though not my first excursion into music criticism after decades of suppressing that urge in favor of pursuing the, ahem, loftier muses of prose and poetry – that perhaps dubious distinction belonged to Factory Star’s one and only full-length from 2011 – it was the prospect of a resurrected Distractions that lured me across the divide. As to why, it’s probably best, in the name of expediency at least, to simply link back to the SEM review of comeback album The End of the Pier that eventually appeared in spring 2012. All the answers as to the hows and whys regarding this modest little band from Manchester’s charming sway over my – and many many others’ – allegiances can be found in the first four paragraphs of that previous piece. But, if you’d rather just have it in a couple of broad-but-concise brushstrokes, the Distractions were too damned likable to ignore, their brand of purely-minted pop savvy too memory-special to allow them to slip any further into obscurity. The warm steady glow the band emitted from inside the maelstrom of 1980 was like a nightlight amid all that wonderful gloom and jagged fury. The prospect of having it switched back on anew in the 21st c. felt, before the fact, too much to expect or even contemplate. And yet…

…arrive it did, and your correspondent spared little effort in sharing the innate exuberance that welled up from within with something of a feverish glee. Without doubt the record deserved it on its merits but I wasn’t alone in letting just the very fact of a new Distractions album color my thoughts with a touch more vividity than might have otherwise been assigned. Such is the nature of love. So, yeah, my bias precedes me but, as it seems inevitable that any writer that’s known of them from the start will carry into their prose a similar level of regard, it feels only right and proper to wear my conflict of emotional interest on my sleeve, especially seeing as I can’t brush it off no matter how hard I try. 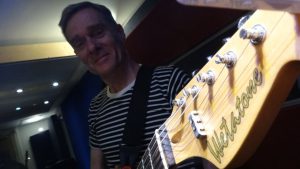 If, with a build-up like that, my response to this third – and decidedly final – LP strikes as surprisingly subdued compared to that ‘feverish glee’ mentioned above, understand there are compellingly salient if bittersweet reasons, not least of course that very finality, reflected in the record’s unsubtly poignant title, the stark monochrome loneliness of the cover, in the texturally dusky tone that permeates the sounds inside like an exquisite pall. Add to that the recent passing of beloved anchor drummer Mike Kellie, a one-man monument to rock’n’roll history whose CV stretched from Spooky Tooth to the Only Ones while playing sessions with a who’s-who of rock legends (including the Who, on Tommy), and it shouldn’t be unexpected that Kindly Leave the Stage – the title notably going uncapitalized on the front – would come wrapped in its share of existential longing. Autumnal, then, valedictory about the edges, the songs while ostensibly plying the usual, distinctively Distractions themes of lingering heartbreak and pain, are suffused in sound and feel by the lateness of the hour. Beyond the basic beauty of the record – like every Occultation release, the fidelity is lush, a kind of straightforward lavish – what’s perhaps most remarkable is how well-suited singer Mike Finney is to inhabiting the contours of a ‘certain age.’ An astonishingly natural instrument from the very beginning and still as supple as a seaside breeze, no voice that I can think of has more instinctively hewed to the arc of one’s lifetime. If what you’re looking for is the unselfconscious expression of what it’s like to find yourself tumbling in to your sixties, still feeling oddly timeless, wide-eyed but reflective, it’s Finney’s voice you want, and it’s the Distractions you want shaping the songs it sings. This album brims from within its core with that understanding.

Loaded with layers of nuance so deeply music-empathic they’re as ephemeral as the air in the studio, as the moods of the players as they exchange looks from behind their mics and gear, Kindly Leave the Stage wears its gravitas with an agile deftness of touch. Much of that, no surprise, is down to the audio vision that defines guitarist/producer (and Occulation founder) Nick Halliwell, whose knack is one of unobtrusive illumination that is easily identified across the label’s catalog. That said, though, it’s hard to know with this band where the surety of Nick’s instincts leaves off and the inherent emotional pop depths the Distractions have honed with unforced genius since day one, take over. Wherever that borderline’s drawn, the blending of the two has the sound of destiny to it.

Coming out the gate with an aching minor chord from guitarist/founding member Steve Perrin, part twang part lament, “A Few Miles More” announces the record’s intentions with the sighing – if jaunty – certainty of a romantically bruised town cryer. Behind Finney’s disconsolate couplets – “Painted myself into a corner / haven’t felt like this since Elvis Presley died” is how the thing begins – the band prop up their front man with a solid backing we’re just going to call ‘profoundly unostentatious.’ A couple of strummed acoustics, one amped one not, play basic rhythm underneath and to the side, two electrics chime in conversation when needed, and then there’s the bass. As it’s been throughout this last iteration of the band, Arash Torabi’s bass work is central to the Distractions’ moody aesthetic, at every turn an intuitive match to the plaintive tonalities of Finney’s voice. A stripped-down array of instruments like this – Kindly boasts no keyboards, no synths or effects, and Probyn Gregory’s horns are judiciously limited to only one track – doesn’t often manage the sublime yet here, in these able hands, a kind of resigned luminosity reigns, the quiet miracle of this too-often undersung band continuing undiminished through its final act.

From “Last to Leave”‘s soulfully upbeat lowdown on a romance’s dissolution, through “The Fire”‘s shade-drawn, elegiac rumination on a love’s brave last flickerings, to the chapter-wrapping “The End of the Pier” that rejuvenates hope at its title’s most unlikely of places (though it might be said that the shivers of beauty the track gives rise to are indeed more appropriate out there), these songs uphold that most difficult pop criteria, staying out of their own way while simultaneously imprinting themselves like koans carved on to the back of your consciousness. You shouldn’t be surprised if one of them haunts your thoughts as you drift off to sleep nor be surprised when it’s still there when you wake up. Among the ten tracks here, however, the candidate-most-likely-to has to be the horn-swathed, Perrin-Halliwell co-write “Wake Up and Kiss Me Goodbye.”

While it’s true that I fêted End of the Pier‘s opener “I Don’t Have Time” as sharing the imperishable DNA of the band’s ‘breakout’ single “Time Goes By So Slow” from 1979, here, as if recognizing an unspoken imperative, the Distractions have managed the near impossible, bookending again, against any odds I’d have given them, their improbable run with two of the purest, most translucent pop gems imaginable. And while “Wake Up” earns that honor on its musical merits alone – the wisdom of having Ian Henderson fly in from Dunedin to carry on behind the kit couldn’t be more evident, the yearning edge of Finney’s vocal as humanly brittle as we’ve heard it, the brass’s accents quite literally breathtaking, the melody and progression the stuff that dreams are made of – its genius lies in its narrative. Where “Time” wallowed (brilliantly, of course) in youthful despair, here that heart’s bereftness finds a more seasoned accommodation, the older, sleepless lover working through wavering doubt toward that light down at the end of the night, a shivering glimmer of hope that, no matter how weak when held against the worry it’s meant to neutralize, still represents not only the greatest emotional strength we’re quite likely capable of but as well a solace unthinkable to that kid wandering the streets of a Factory single in 1979.

A tour de force, an unassumingly towering pop moment, “Wake Up and Kiss Me Goodbye” is no less than the apotheosis of the very qualities that have drawn us to the Distractions all along, evincing as it does a portrait of a mere mortal standing inside his own precariousness with an unshaking spirit, the ever-present sense of fallibility never so great as to quell aspiration. Regardless of it not being the album’s closing track – “End of the Pier” lays understandable claim to that role – for this writer, it’s “Wake Up and Kiss Me Goodbye” that truly closes the book on this band, it is the final word.