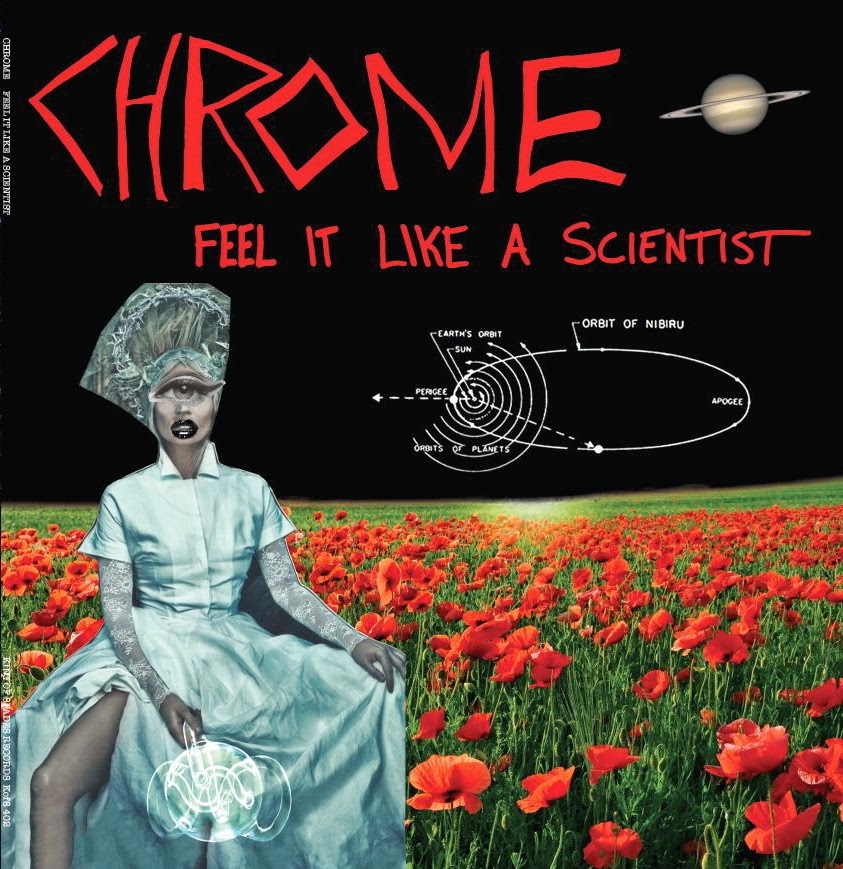 One wonders, one marvels, one concludes that the guy simply must be bursting with it. That from plasma to marrow to every corpuscular throb through his restless veins, Helios Creed is preternaturally burning with the energies of raw noise, psychedelic guitar mutations, skewered rock’n’roll progressions and stray, ion-charged melodies he’s adopted like an orphan militia. How else to explain the unrelenting drive, the feral charge, the singular focus of corralling what seem scattered impulses and transforming them into solid cinematic sci-fi snapshots that flood one’s senses with a pervading vaporous insistence? One almost suspects that Creed was alien-injected back in the 70’s with some kind of cosmic serum, a Kobian booster shot that put him out of reach of most mortals.

It’s not just the volume of solo and Chrome-related material over the years (45 or so LPs, a dozen singles, multiple comps) nor the tireless touring (including a stint in Nik Turner’s Space Ritual) nor even the vigorous resurrection of the rediscovered lost Chrome tapes from ’79-’80 that required meticulous attention and resulted in last year’s extraordinary Half Machine From The Sun double LP, all of which is pretty exhausting even when you’re just detailing it all in a sentence. It’s as much the quality, the impetus, the sense one gets that should he not get it out, not find a way to explore toward an ever-(mind)expanding, relatively uncharted musical horizon that Helios Creed would, in fact, melt down or explode or both. And here, with the release of Feel It Like A Scientist, we arrive at the next way station along that self-preserving journey and what amazes beyond the energy and focus it took to get here is how surpassingly, well, great it is. FILAS may well be Creed’s most vital work yet.

Both labyrinthine and bold, nuanced and unrelenting, Feel It Like A Scientist once again confirms what an intrepid sound warrior Helios is, helming excursions all over the topographic map of all things Chrome with robust aplomb. Whether you’re attracted to the band because of their avant-rock tendencies, their jagged garage punk leanings, their inadvertent, default place in the post-punk canon, their latent, irrepressible psychedelic swagger, the sci-fi storms that so often brew inside the band’s constructions like JG Ballard novels made audible, or some lab experiment hybrid thereof, it’s all here in shameless, vigorous abundance. That serum’s really working. The man himself may have aged, but the spirit of the music he makes has not.

Though the spirit of Damon Edge on any Chrome outing will never be fully absent, and indeed appears here lyrically on “Big Brats, a punk-as-horror-biker-movie scrum with a metal edge (“we’re big brats, coming to your town“), this record belongs to Helios and the legacy he’s built for himself especially since grabbing back the reins after Damon’s passing in 1995. It’s the energy the two conjured in the raw, wild-west mid-70’s that flourishes, their meeting in 1976 the origin spark that’s still igniting near forty years later, making that fateful encounter just about as big a big bang moment as ‘rock’ music has known. Creed, at whatever age he is (57; thanks, Wiki) is fully animated here, much as he’s always been. It’s just that with that Chrome moniker attached, combined with the band as it now stands – keyboard whizbang madman Tommy Grenas, protean drummer Aleph Omega, Lux Vibratus routinely moving mountains on bass, Lou Minatti (nee Keith Thompson) on second guitars and Anne Dromeda (or Monet Clark as her mom calls her) adding vocals – there seems an additional drive, resulting in a careeningness beyond the sum of its parts. Chrome in full flash, and in that sense Damon is as present as ever.

From the space-chase rhythms of “Nephilims (Help Me)” that kick the journey off, precise tracers of arcing noise shooting off in all directions around a slant-6 solid garage rock manifold, to the Grenas-composed album-closer “Nymph Droid”‘s flight through imagined atmospheres and cosmic dust that drifts past Holst, past Sun Ra’s Saturn, past the final frontier until it finds echos of birdsong at the edge of the universe, FILAS is, well, a trip, truly, figuratively, viscerally. Consider these tracks astral postcards even as they’re written and sent from the vibrating mantle of planet Earth.

As much as the record is tracklisted with the traveler in mind, winding down to that smooth “Nymph Droid” landing at the end – the two penultimate tracks “The Mind” and “Systems Within Systems” both exhibiting a steady, deliberate, almost yeoman’s beat, exploratory synths joining keening psych guitars to hover over a spoken vocal like a ceiling made of lysergic noise – one can dip in anywhere on Feels Like A Scientist and get a fresh Chrome jolt, or skip around according to mood or preference. Chrome accommodates us all and though those with a taste for the ricocheting space vibe might have the most thrilling ride, no one’s left behind. 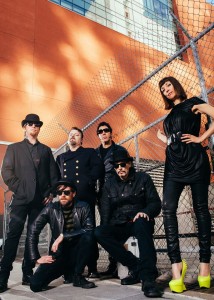 “Prophecy” comes on with a drone of seemingly lost NASA transmissions pulling toward us then lost in a whorl before we’re startled into a psych-sludge storm of a rocker detailing the coming enviro-pocalypse from which only greater beings might save us, their ship’s arrival signaled by a laser chainsaw blast of guitar. “Something in the Cloud,” less alien soundtrack than alien diary entry, the treated vocal in base narrative mode – lyrics elusive, part of the static – while an echoless echo chamber racket swirls around it, should come with its own Aragon Ballroom lightshow and a tattered laser gun instruction manual.

Exemplary and illuminating, a four-song sequence two-thirds through speaks succinctly to the Chromium range this record presents. Though throwaway in appearance – only a minute eighteen with the band’s sillier side on full display – “Brady the Chicken Boy,” besides being PiL on helium amphetamines, chicken vocals and all, sets down a seriously propulsive, funky-by-Chrome-standards groove that one yearns to hear extended. Not to fear. After the Lux- and Aleph-penned “Slave Planet Institution” with its hard drive heartbeat, Outer Limits sound collage and spoken-word soliloquy explaining a planet’s re-population (and containing the word ‘revivify’ – props!), the lengthy, boundary-melting “Cyberchondria” takes up the bass throbby thread. The invisible ephemeral blood of the universe alchemized into sound and sent down like homesick radio waves returning to Earth, bringing along whatever they picked up along the way, the track is massive and hypnotic and could well be considered the very heart of what Chrome is, its metallic human quintessence. Straight on the heels of that track’s long fading pulsar coda comes “Himalayanelimination,” a space rock traipse through avant post-punk with steel sheets of noise, another grinding bass groove, and feral, miked mutterings, voice in this instance just another disturbed sonic element, thin if pitch-appropriate howls and percussive utterings, enough to pleasingly disorient while guitars hang above in both a fog of sustain and a sustained shred, the rhythm section powering forward like a generator left on under the floor, stuck on some sort of systolic Can setting. That flurry alone should compel without delay a trip down whatever avenue one seeks to purchase music these days but naturally there’s more, much more.

There’s the Sabbath-reimagined “Unbreakable Fluoride Lithium Plastic,” coming out hard and heavy, dredging the grunge for chunks of shiny anthracite, asylum-desperate vocals giving way to the Lydon-Vanian variety before it’s all turned over to a Mad Men-era sound clip (“You’re hot, you’re sticky, your skin feels rubbed and chafed“), cheap beat poetry for the time-warp dispossessed. Back to their psychier side, there’s the particle-physics rock’n’murk of “Captain Boson,” a confessional, disembodied vocal a la some lost-in-space Wizard of Oz finally facing up to his isolation and the absurdity of his delusional existence, the track kicked into gear by Omega’s piston-perfect drumwork then synth-carried into a funnel cloud of duel guitars going off like an undiscovered cut from Frampton Comes Undead. On the more aggro side try the churning “Lady Feline,” a classic Chrome-plated garage attack that, between its title and the speed-droney melange of sheeted guitars, is what you might get when you think ‘breakneck Velvet Underground.’ That it’s got a hot Nuggets hook at its center, well, that’s just more savor for the soup, isn’t it? Or try “Six,” a dark yet single-ready blast at just over two minutes that would have been ideal on one of those tableside jukeboxes at the Chalmun’s Cantina had George Lucas had the sense to install them.

A splendid, fulgurating ride, Feel It Like A Scientist is exactly that thing a Chrome fan wants and expects regardless of what aspect of the band most appeals. In Helios’ own words from an interview earlier this year, he has “the best band put together, finally,” firing in every direction on all cylinders, the motherboards on the mothership fine-tuned to the furthest far-out while keeping the atomic core simultaneously tight and loose and locked on target, that target the heart of the rock’n’roll sun.

There aren’t a lot of artists of this vintage so capable of effectively erasing the decades that prompt the use of that V-word in the first place. Helios Creed doesn’t sound like a musician reborn here, he sounds like a musician being constantly born. A sense of constant emergence marks his career, an unceasing process that expresses its definition most exquisitely and, indeed, definitively, on this record. The future is here where it’s always been, Chrome on center stage.