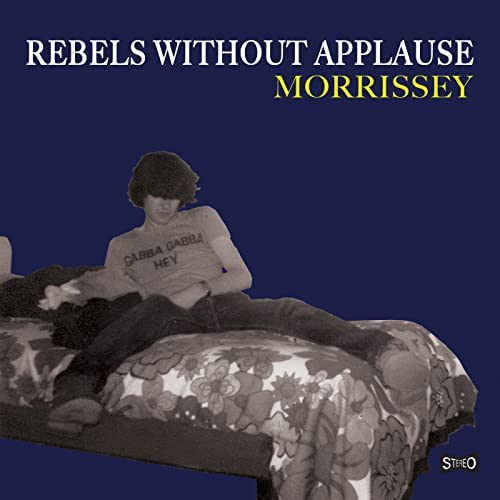 If Morrissey had just simply slipped into his Get-Off-My Lawn years, his public crankiness—like complaining of being cold onstage and ending a show after 30 minutes—could easily be dismissed as just that.

But his public praise of Brexit, his xenophobia, his racism, his observation that multi-culturalism thrives at white culture’s expense, combines to form a troublesome phalanx.  And by the way, this expurgated list of indefensible infractions could certainly be longer. But you get the point.

The truth is, Morrissey has been consistent in his views since the mid-’80s, but swooning Smiths fans looked the other way because it seemed impossible that such an outsider could have so much hatred on the inside.

Cornershop called him out in  1992 and The Simpsons did the same thirty years later. And in between all that? White Nationalism, insistence that Hitler was left wing and a prominent Far Right pin on his lapel during a performance on Fallon.

So where are we now with Moz? We’re where we’ve always been. To say that Morrissey’s moral character is a bizarre turn—like Kerouac’s abrupt jackknife to the right in his brief later years—would be way off the mark. He’s always been this guy.

Does it make Louder Than Bombs a freighted listen?

Does it negate The Smiths’ brilliant performance I saw in San Francisco in 1986?

Does it make me feel weird that I listened to “First Of The Gang To Die” twelve times in a row one cold January day 15 years ago while stuck in traffic?

More importantly, for those of us who survived high school in the ’80s thanks to “Sheila Take A Bow” and “Please Please Please Let Me Get What I Want” and “Frankly Mr. Shankly,” to reverse engineer now would make no sense. If we disavow that catalog of music, what existential crisis would it yield?

The fact is, for those of us who couldn’t have done it without him then, likely want no part of him now.

Which brings us to today’s fresh dilemma, which is really another piece of timber on the already burning fire that’s propelled by one question that the Paris Review asked years ago: What do we do with the art of the monstrous?

I don’t have an answer—I think it’s best to make that call yourself. But if you cull your collection of art (music, movies, books), so it only contains those of fine moral character—and public jerks aside, nobody really knows what lurks in the hearts of anyone, so it’s really just a guess—you might be left with a lot of empty space. Only you can determine how big that space will be.

Back to the dilemma. Morrissey’s new song “Rebels Without Applause” is really good.

Repugnant behavior aside, his musical output has been underwhelming since 2004’s You Are The Quarry. But “Rebels Without Applause,” which is taken from his new album Bonfire ofTeenagers, which may or may not be released in February—last we heard from Moz, that would be a big no—is one of his best songs in years.

Featuring Chad Smith of the Red Hot Chili Peppers on drums and Josh Klinghoffer on guitar, “Rebels Without Applause” is a number that’s both buoyant and catchy. But what’s most notable about the track is it boasts a Smiths-like economy. Klinghoffer’s playing is bright and melodic and though it tips its musical hat to Johnny Marr, it does so in a way that’s fresh and inventive. And for the first time since maybe Viva Hate, Morrissey wraps his voice around those guitar lines with dreamy finesse.

The title is far from Morrissey’s best and the lyrics don’t really break any new ground, but the September Of My Years sentiment that finds him admitting, “The gang’s all gone/And I smolder on,” is an honest moment of reflection and self-realization that Moz island is small and sparsely populated.

The song name-checks Generation X and X-Ray Spex and bemoans the loss of the “bawdy boys of song” as well as the “girls all gone wrong.”

Of them both, Morrissey declares, “I loved them all.”

If Morrissey feels alone in his later years, that’s more than partially his fault, but the recent death of his mother and his friends is most certainly not. Although he wrote the line, “…time’s tide will smother you” as a young man, he probably only now knows what that really means.