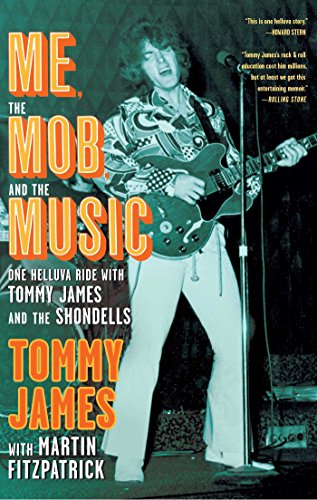 A 19-year-old singer named Tommy Jackson, frontman for The Shondells, of Niles Michigan, finds himself in New York City for the first time, in the office of Roulette Records with a recording contract in front of him. That’s Roulette.  Not Columbia, RCA, or Atlantic, even though those companies, along with others, just the day before, had been very interested.  Apparently those label heads received the proverbial “offer they couldn’t refuse” from mob-connected Morris Levy, head of Roulette Records.  Young Tommy learns of this and is a bit wary but his manager has assured him that all’s well and the label is just in need of a hit.  In the middle of the meeting, Levy, a tall, tough-talking, New Yorker, excuses himself to meet in the hallway with a couple of his employees. Tommy overhears them tell the boss that they just used a couple of baseball bats on a guy over in Jersey who was bootlegging their records.  After getting the details, Morris returns to find his soon-to-be teen idol a bit shaken.  He leans into Tommy’s ear and says, “I hope you’re ready, kid, because you’re about to go on one hell of a ride”.

Tommy James, with the help of Martin Fitzpatrick, takes us along for that ride in this truly electrifying and revelatory account of his career.  The story behind the hits — from “Hanky Panky” to “Draggin’ The Line”– is told as entertainingly as any best-selling novel.  James pulls no punches.   It’s a story he had to wait years to tell, in fear of the mobsters he talks about.

The book starts with James on a comeback tour in 1990 when, backstage and about to be interviewed, he’s told that Morris Levy is on his deathbed. The interviewer asks, “Who’s Morris Levy?” James answers the question by telling his own life story in riveting detail.

There are turning points throughout the book, starting when James, still in Michigan and a teenage husband and father, is faced with a decision after his recording of the Barry/Greenwich song, “Hanky Panky” flops, and he’s offered a job at John’s Bargain Store.  On his way to his first day at work he turns the car around and decides to take the road to stardom after all.  “Hanky Panky” is discovered — two years later — by a D.J. in Pittsburgh and it becomes a regional smash.  And the ride with Roulette begins.  A string of hits follows but what doesn’t follow are the royalty payments.  Levy instead doles out a few thousand bucks here and there to keep the kid happy.  And this is the crux of the book:  the relationship between Levy and James, which comes off as almost father/son.  At times it feels like you’re reading The Godfather or looking at an episode of The Sopranos (Levy was actually the basis for one of the characters in that series), especially when James finds himself in the middle of a mob war and has to leave town.

The book has a nice collection of photos, including young Tommy Jackson with his first guitar in ’57, looking very Ricky Nelson and a great shot of his first band, the Tornadoes.  But, unlike your typical rock star autobiography, you’ll also see mug shots of famous Mafiosi, alongside Hubert Humphrey, who James campaigned for in ’68.