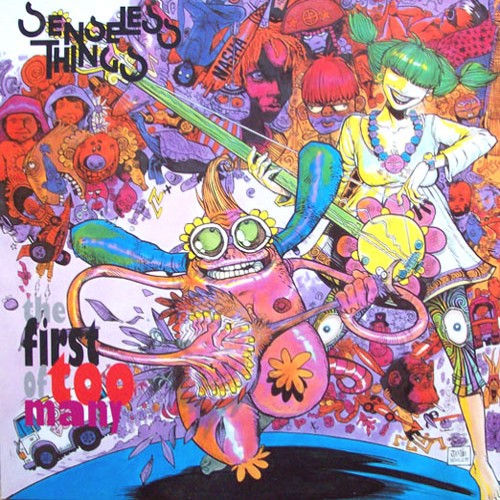 The singer/guitarist who reportedly had a recent battle with pneumonia, is said to have died at his home and at this time no further details have been given.

The core lineup of Senseless Things got their start—first as Wild Division, which became The Psychotics, which then turned into Senseless Things—when the members were just eleven years of age.

Fusing the pop velocity of The Undertones with the melodic sensibility of The Doughboys and the offbeat humor of The Dickies, the London-based Senseless Things were a thrilling outfit. Onstage, they were a blistering proposition, tearing through their songbook with youthful momentum and other-worldly pace. Their sets were known to feature covers and notable inclusions were numbers by The Replacements and the Descendents.

The band put out four perfect pop-punk albums and though they split in 1995, they played together again in 2007 and 2017. They put out the “Lost Honey” single in 2017 and there was talk that a new album could be in the works.

After Senseless Things, Keds played in The Wildhearts, Trip Fontaine, Jolt, Like A Bitch, The Lams and Deadcuts.

On Facebook, Keds’ friend and Deadcuts bandmate Jerome Alexandre wrote: “Just wanted to say thanks to everyone for the messages . It’s all been a bit overwhelming for all of us . I received the call from Nat at 9.30 this morning to be told the news I’d hoped I’d never hear . There’s a few things I’d like to say – Mark really wanted to live and had plenty of future plans .Yes of course he’d struggled with substances but when he departed this earth he was clean and certainly didn’t plan on going backwards. He was a maverick songwriter and every piece and fibre of his being went into his lyrics and music . I feel very fortunate to have been a friend and bandmate of one of England’s finest songwriters – and much like all of you I’ll miss him to the day I die.”

And on the Senseless Things’ Facebook page their guitarist Ben Harding wrote on behalf of his bandmates: “He was beloved across the country, from Inverness to Plymouth, from Ipswich to Aberystwyth, and across the world, from Tokyo to California. It’s his passion and lust for life that will stick with us, and we’re truly thankful (we know Mark was, too) that we all got to do it properly one last time at the Shepherd’s Bush Empire in 2017. We love you, Mark. It seems cliched to say ‘gone too soon’, but damn, it’s true. He was only 50. It’s no fucking age to die. Our love and thoughts go out to his friends, his family, his loved ones and the ones who loved him.”