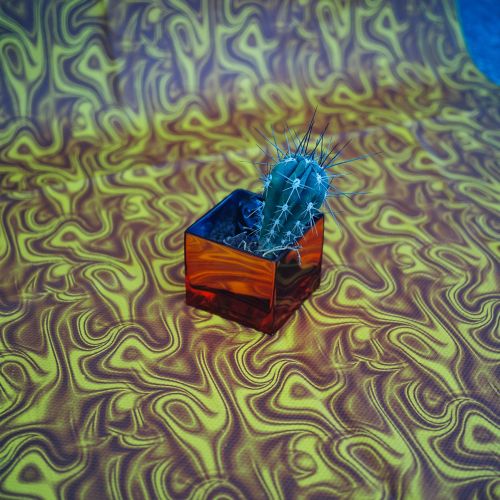 There’s something very disarming in how Katerina Stoykova, one half of Swiss electro-pop duo Wolfman (the other half being Angelo Repetto), spins a sultry, summertime-vibed love song out of feelings of disaffection and loneliness. “You Mark My World” isn’t a new tune; it was one of the standout tracks on the act’s Sun Sun EP from last year.

What is new, however, is that this time around “You Mark My World” has received video treatment courtesy of director Hans-Jakob Mühlethaler, and it also comes with a host of remixes from friends and musical associates. These can be found on an EP that was recently released by Irascible Records.

The record features a cornucopia of sonic interpretations from the likes of Alessandro Gianelli, Tillmann & deAdi, Marlon, Bigeneric, and Rearte. The original track is fun to blast while cruising around the city, but the remixes EP is perfect for jammin’ to in a packed club that’s outfitted with a sharp sound system. So let the summertime vibes ride high and find out more about this intriguing group from Katerina Stoykova herself.

Stereo Embers Magazine: Hello Katerina! Let’s start with an introduction to your music group – Who, or what, is Wolfman?

Katerina Stoykova: Well… It’s me and Angelo. And it’s music based on gut feelings. We’re shy but also, we’re not… We make music that mirrors our current moods… It’s so much feels, haha. Also, we’re really close friends and every song we record is a tight collaboration between us, so there aren’t really any fixed roles.

SEM: Out of curiosity, does the name, being that it’s fairly common, create a problem for you with browser searches and social media?

KS: We’ve had some people think we’re a heavy metal band… and some stumble across the movie… which I think is actually pretty funny. But apart from that, we haven’t heard of people not finding us… Before shooting our latest video (which isn’t out yet), the director asked the head of a gallery if we could shoot there, and the latter responded that heavy metal is not really their thing – hahahahah.

SEM: How do you work around that?

KS: Once people see a photo of us two, it becomes pretty clear they’re not dealing with 12-string guitar players – haha… and for some it comes as a surprise, which I like.

SEM: You had just released a wonderful single called “Mark My World” and a full EP of remixes. Is this your soundtrack for the summer?

KS: Happy you like it! Because so do we, very much! I think it kind of is our summer soundtrack and it all happened really spontaneously, after someone had asked to do a remix of “Mark My World”, and Angelo decided to ask some more crazy musicians we know if they’d like to do a remix as well… It worked out perfectly and the remixes are so, so good, and I think they’re ready for some summer raves.

SEM: Tell us a bit about the new song, and also about the host of producers that you got to remix your music.

KS: I mean, the song, for me, is about heat and summer and, paradoxically, the loneliness this time can bring. Especially when someone hits you right in the feels and you begin associating every place, smell, person, and object with this person… and it’s so much more intense in summer, because everything is out there in the open and one’s loneliness is so much more vivid and in contrast to all the colors surrounding you… and that’s when someone can really mark your world in a lonely space…

SEM: It’s always interesting to see what the creative rituals are in every project. What are some of yours?

KS: Hahahah. I mean… we trash talk ALL the time. I’d say, for me, that’s what really gets our juices flowing; the friendship and the fact that we have zero boundaries when it comes to being ourselves. There is no shame whatsoever and for me, at least, that meant that I could really lean out the window with my singing and playing instruments (I’m not a pro like Angelo; I learned most of my skills with him) without being afraid of making an ass of myself…

SEM: Can you take us through the process of how “Mark My World” came into existence?

KS: As with all of the songs we record, we go through every single step of the process together. There isn’t really any separation of roles. I mean, to a certain extent, there is: Angelo plays the guitar and is in charge of operating most of the technical equipment and I write the lyrics, but everything passes through the other’s check point. I remember writing the lyrics to “Mark My World” after we had most of the instrumental parts ready, and Angelo was equalizing stuff and mixing and I was sitting next to him and just trying to figure out what the music was trying to tell me, and I wrote down some lyrics, grabbed the mic and said, “I need to record this now – do you like?” and Angelo was like, “Uuuhm, I like, yeah. Do you have more?” And it went back and forth like that. I didn’t have a good chorus melody and I was like, “I need you to freestyle whatever melody comes to your mind so I can figure out what to sing…” – and so on and so forth.

SEM: How does it feel to give away stems from your songs to other people and have them rework them?

KS: I think it’s wonderful. You can listen to your music in an entirely different way and it’s really nice seeing that others actually feel your music and are inspired to reinterpret it…

SEM: Are you happy with the results?

SEM: Is there anything that you learned from these remixes about your own music and songwriting, and that maybe you might implement it in your future compositions?

KS: Hmmm. I think for me it shows that we should never be afraid to show our work to others, even when songs aren’t finished yet and that co-working with others can benefit the music a lot. But it’s something we’ve actually always been doing: After we’ve finished an album or EP to a certain extent, we’ll call in someone we really like for their producing (so far it’s been Hans-Jakob Mühlethaler, also a musician and producer and our main man for most of our videos, and Flavio Schönholzer, a producer and musician) and have them listen to our music and bring in their input, before we sign off the final mix of the songs.

SEM: I’m assuming that all of these songs are slowly building a bridge to your next full-length. Can you reveal some details about that, or is it still too early in the process?

KS: I’m so looking forward to our next album. We’ve recorded quite a bit and to be honest, there are more ballads accompanied by guitars than in the last EP. It’ll be moody and romantic, but there will also be two or three party tracks on there. We always tend to record our current moods, so there’s no way really knowing what that mood will be.

SEM: When you look back on your discography, how has your music evolved since your first LP?

KS: I think we’ve managed to stay true to our sound, but I’m seeing improvements in song-writing, at least on my part, and more guts to do what we feel and want, and be assured it’s the right choice

SEM: The summer is almost here, so on that note, give us your Top 10 spring/summer jams!

KS: “Baby” by Ariel Pink, “Czech One” by King Krule, “L’Amour et la Violence” by Sébastien Tellier, “Four Walls” by Eddie Holman, “Where Do You Go” by Charlotte Day Wilson, “Walk On By” by Matias Aguayo & The Desdemonas, “Lavender” by Lapcat, “Underwear” by The Magnetc Fields, and “Falling Out” by Otzeki.

Find out more about Wolfman