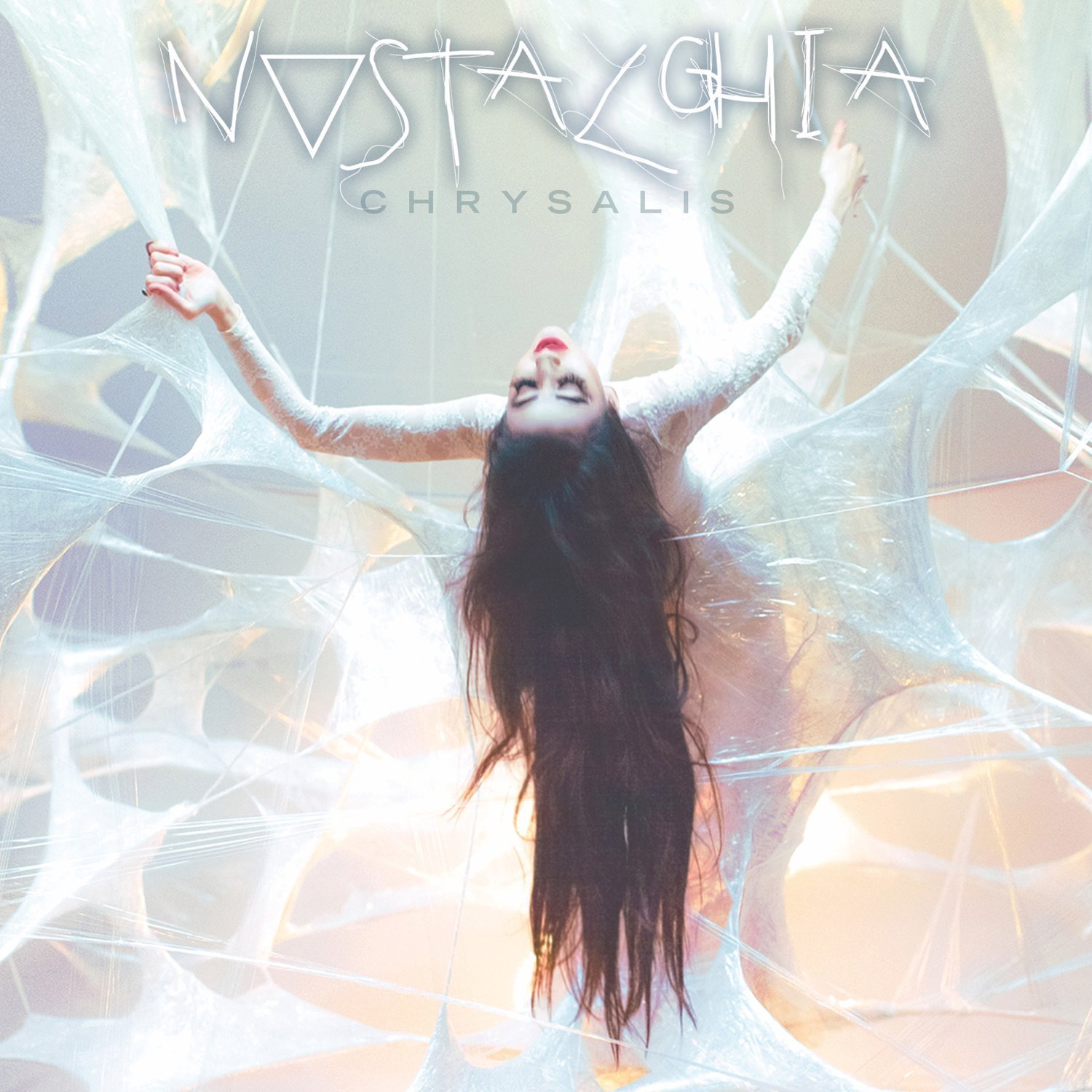 Last week I had the opportunity to review Nostalghia’s game-changing debut LP, Chrysalis. Here’s a snippet of what I wrote:

“Chrysalis is, after all, about the pain of birth, and it’s also about the joy of growth. It’s about changing listeners’ perspectives, so that they see pain and joy as one glorious process.

“I know that this attempt at perspectival change is gutsy and rare in a debut record—or any record, for that matter—but Nostalghia aren’t just any band. They’re that rare band that comes along every so often—that rare band with a new sonic template that provides listeners with a new framework with which to see the world. They’re that vital.”

I meant every word of it. Chrysalis is a record that you need to seek out and listen to – NOW.

If you need further convincing, just read the following interview with Ciscandra Nostalghia, the lead vocalist and songwriter for Nostalghia. Ciscandra’s creativity and passion come through in her conversation just as much as they do in her music. I was honored that she took the time to share her story and the creation of Chrysalis with me.

SE: First off, congratulations on Chrysalis, which is one of the best debut LPs that we’ve heard in a long time. My first question has to do with your family. Would you please describe the cultural diversity in your family?

CN: My mother is Iranian; she was born in Iran. She ran away from her home at a very young age and moved to Germany, later relocating to England, where she went to college and met my sister’s father, who had previously lived in Jamaica. Together, they moved back to Tehran and had my sister. They brought her to America.

Cut to years later, and they are divorced but still very good friends. My mother met my father. She landed a job working for him – of course she did. My father is a mutt – Irish, Russian, and French. My sister’s father – a Jamaican living in England – my mother’s mother, who was Persian and German, my mother’s brother, a Persian musician, and my mother and father raised me.

This was, quite obviously, a very passionate, very diverse, very intense bunch of charming lunatics. I was born. I think I’m carrying the torch – good luck to everyone.

SE: Does this cultural diversity influence the sonic diversity of the music on Chrysalis?

CN: In some sense, yes. It would be hard not to be influenced by my family. I was definitely infected and affected by my family in a multitude of ways. There were always different languages and accents swirling around, and I was home often. Having a Persian mother means you are home often. The family dynamic made it difficult to really get acquainted in any kind of scholastic ritual, so 50% of my schooling was spent at home. I missed many, many days.

I’d say the affluence of emotional turbulence – all that passion beneath one roof – made the most impact and held the most weight in regards to me as an artist. The way I sing has little to do with where I came from or the languages I speak. I hesitate to say that because I think music is a language in itself, as is experience. My voice is emotive, and it colors the music with whatever I am feeling the most in the moment. It morphs and changes, and the day I’m asked to be static will be a very, very bad day for the person doing the asking.

So I suppose what I mean is, heritage is not the only thing making up the music or my vocals. It runs deeper than that. We all have many people living inside the wormhole of our head. I think it’s a shame that we have placed consistency as something needed. “Be dependable.” It’s not real. It doesn’t exist. But it’s strived for. Fuck consistency. My voice will never been dependable, nor will my art. I believe in embracing all sides of the psyche. If today I wake up as a tiger, don’t think tomorrow I won’t be a rabbit. That is the life of a child. That is a life filled with fun. Why bore yourself?

SE: I’ve read that as a result of your family’s diversity, you had a hard time making friends as a kid—and I’ve noticed a lot of feelings of loneliness and despondency in some of the lyrics on Chrysalis. Is there a specific song on the album that deals with these feelings? Songs?

CN: I’m still not sure what it was, but yes, I attracted – and still do – a lot of extreme and sometimes violent reactions, in both directions. It wasn’t always negative. But it was very difficult to understand what was happening and why.

I didn’t necessarily feel lonely. I have a big imagination, and I spent a lot of time with my mother. We were attached at the hip when I was growing up. We were very close, but we didn’t see eye to eye on multiple things. I’ve never been good at keeping my mouth shut, and I would speak up. I think that drove her nuts. But she’s already nuts! She’ll tell you herself – she loves it, and I love her in the deepest weirdest way possible.

I’m not sure I’ve ever said this in an interview. I usually speak on how difficult things were – and they were. Very. But, there’s also a lot of beauty I think I’ve been failing to mention. My family is bat-shit crazy, but it’s wonderful! I love who I am and am becoming.

And I had a terrible time in school. I was made fun of daily and was driven into the parking lot sobbing, begging to go back home. But the abuse has been productive! I think some sick part of me – or maybe this is health – understands how vital it all has been. All of this pain based around feeling like an outcast has given me a real blood-and-gut personality that I would never want to be without. And now, I’m able to make others feel the same.

All of the music deals with all of these feelings all at once. There is no singular special song.

SE: How did you meet your bandmates—drummer Roy Gnan and cellist Adele Stein—and why did you decide to include them in Nostalghia?

CN: I met Roy on Craigslist. Craigslist chic. How could I not decide to include him on this journey? He was a part of it before I could even fathom the idea of journey. He’s integral, important, extraordinarily talented, and one of the kindest hearts I’ve met. Everyone needs a Roy. He sorts out my chaos and helps me turn it into something beautiful. He really gives room to allow me to be as I am.

As for Adele, I think our manager snatched her up. We needed live cello for shows. I’ve had the blessing of getting to know her on a deeper level each tour, and she just keeps getting lovelier. The last day of touring in Australia on Soundwave, she completely ripped the threading on her bow. That’s how badass she is. She gives it her all. And that’s just it, that’s what it’s about. I would never work with anyone continually who couldn’t rage.

SE: What does each member contribute to the band’s sound?

CN: Roy and I are the primary members contributing to the band’s sound. Sometimes we bring a few others on board, but 99.9% of the time, it is just the two of us hacking away. I tend to write the basis of the song, and then together we manifest the production. But, there really is no singular way. “Cool for Chaos” was based on a jam.

CN: The only other player is Claire Courchene. She played cello on “The End.” She’s a great cellist. And Glen Sobel, Alice Cooper’s drummer, played drums on “Stockholm Syndrome.” All the other songs were either Roy or myself on piano, guitar, autoharp, harp, bass, etc.

SE: Let’s talk more specifically about some of the songs on Chrysalis. When I heard the title track, I was struck first and foremost by your vocal approach. How did you decide on the way in which to sing the song’s melody?

CN: It’d be pretty limiting if I were the deciding factor. Humans can only take things so far. Melodies, lyrics, and music choose me. I just act as an openhearted vessel, curious, like a stranger reading my own diary. I’m very close to it; it isn’t dissociation, but there certainly is a greater force field I’m tapping into when I create.

SE: On the same song—and throughout Chrysalis—your voice and Roy’s strings complement each other beautifully. How does Nostalghia arrange the string parts on the album?

CN: We press on piano keys, tap tap tap, and say “ooooOoooo” or “ewwwwWwwww” or “eh.”

SE: “Cool for Chaos” features excellent—and surprising—dynamics. How did you and Roy decide on the structure for this song?

CN: That entire song was a freeform jam. It was the first time I frighteningly found out I had a really loud shrill. The structure, even most of the lyrics, stayed as they were: naturally born.

SE: What was the inspiration for the “Cool for Chaos” video?

CN: It developed meaning as we shot it. It wasn’t very precise going in.

SE: On “Sunshiny Milk,” there’s a cool lyrical dynamic—and another courageous vocal performance. The changes between what I’m going to call the “sweet” and “harsh” passages are very dramatic. What gave you the courage to “go for it” so intensely as a lyricist in the “harsh” passages?

CN: I am afraid of everything, but I’ve never been one to allow my fears to stop me from saying or doing whatever I feel like saying or doing. Art is freedom. If I didn’t give you my all, I’d be a fraud.

I don’t want to lie to you. Too many people lie, edit. Not that I don’t understand. I mean when I’m sitting in a room full of strangers, and they are listening to my lyrics, I definitely wonder why the hell I “went for it,” but…it doesn’t last. I commend courage. And I might even get a little kick out of people’s reactions. It makes me feel like a leprechaun. But don’t think that tomorrow I won’t be a tortoise. I’m going to give you what I have until the day I’m dead.

SE: The video for “Sunshiny Milk” is phenomenal. Any good stories about making it? Its genesis?

CN: Thank you. Mmmm. Once upon a time there was a girl who decided to make a music video for her band’s new song, so she savored old footage and learned the inner workings of iMovie and worked until she could work no more. And according to you, it worked out. The end.

SE: Chrysalis concludes with what are perhaps its three strongest tracks—“Meek,” “I’d Still Kill You,” and “The End.” Tell us about the creation of the beautiful, soaring string part on “Meek.”

CN: Thank you. Those are interesting choices. I like them. But again, there isn’t much I can say about the creation of “Meek.” It just happened. I’m really not methodical.

SE:  Your vocal on “I’d Still Kill You” is simply astonishing, especially in the choruses, which contain jaw-dropping high-register singing. Why did you use such high-register vocals to deliver the song’s lyrics?