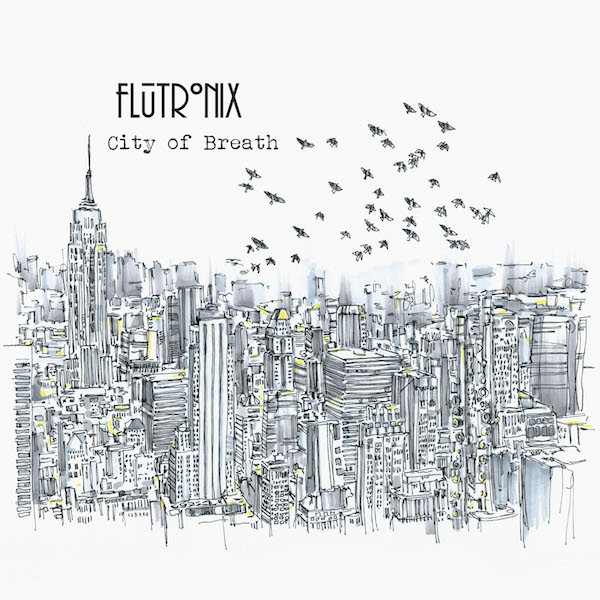 T.S. Eliot once wrote in Four Quartets, “In my end is my beginning.”

Taking Eliot’s poetry as advice for reviewing Flutronix’s mesmerizing new EP City of Breath, I want to begin with the last track, “Like a Storm.”

Written in homage to one of their mentors – iconic American flutist, Carol Wincenc – “Like a Storm” features Flutronix’s Nathalie Joachim and Allison Loggins-Hull at their most evocative. At the beginning of the piece, their flutes make you feel the first ripples of a churning wind-to-come before they strike with a bolt of surprising percussive power. They then, at the track’s end, part the clouds into a peaceful catharsis.

That’s the thing about Flutronix and City of Breath. They give you a physical revelation of the flute’s versatility as a rhythmic, melodic, percussive, piercing, soothing instrument.

Joachim and Loggins-Hull’s acoustic rendition of “Flock” – which appears in a different form on last year’s 2.0 LP – captures this versatility. Delicate and entrancing, “Flock” undulates like thousands and thousands of starlings in flight, doing justice to its inspiration, Steve Reich’s Vermont Counterpoint.

Which brings us to Reich’s iconic composition – a piece that Joachim and Loggins-Hull must have found to be a labor of love to “cover” on City of Breath. I use quotation marks to enclose the word “cover” because the piece bears that special Flutronix stamp. Unlike other performances of the piece, which feature one flutist, Joachim and Loggins-Hull both appear on Vermont Counterpoint, blending their individual personalities as players to snag your subconscious instinct to resolve its conscious complexities into deeply felt emotion.

Vocally, EP-opener “She Is” – another reworking of a 2.0 track – operates in very much the same way. The complexities come from the blending of the medieval and gospel vocal traditions. The track, which finds Flutronix singing and playing with the Melodia Women’s Choir (Joachim’s lead vocal is astonishing), transforms your listening space into a haven for meditation and introspection. It works so well that you forget yourself and the mundane and feel at one with the performance.

“She Is” is a point of connection, as is the rest of City of Breath, an EP that, like an unexpected and powerful cloudburst, grips you in Flutronix’s drenching, undeniable sound.