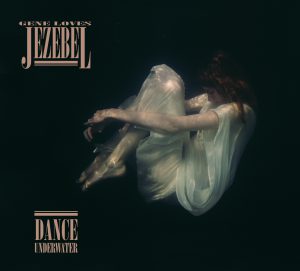 Let’s hustle past the court-imposed confusion that resulted in ‘The Tale of the Two GLJ’s’ (details aside, twin brother Michael’s incarnation is known as ‘Michael Aston’s Gene Loves Jezebel’ in the UK and just ‘Gene Loves Jezebel’ over here while Jay’s version claims the inverse arrangement) and address the record at hand. For a band that, upon its 1983 debut (Promise) placed itself in the fine-if-not-trailblazing league of postpunk-inspired bands that included, say, Lords of the New Church and The Southern Death Cult among (perhaps too) many others, Jay Aston’s Gene Loves Jezebel has proven to be quite resilient indeed. Still staffed by the same cadre that coalesced around 1987’sThe House of Dolls album – Jay the singer, James Stevenson guitars, Peter Rizzo on bass with Chris Bell drumming and Peter Walsh in the producer’s chair – it’s a state of affairs that extends to their fanbase as well, those that crowdfunded this first album in fourteen years far beyond expectations. And mostly, it should be said, those generous contributors have been rewarded.

As per its title, much of this record has an immersive feel, both in terms of the relaxed but devotional sound the band create – thanks largely no doubt to their long-term mutual familiarity – and the extent to which the tracks effortlessly mine both Gene Love Jezebel’s own past and the pop history into which their work is inextricably woven. While nothing quite lives up to – nor should be expected to live up to by any reasonable person – their earliest, umm, promise, there is nonetheless much to relish.

“Charmed Life (Never Give In)” launches with dappled shining synths grounded by the nimble pluck of a bassline, the sound’s surface soon punctuated by guitars that chime and churn or skitter according to need as Aston sings aspiringly of everyone’s inherent potential. While the message tends a tad toward the quotidian, the track, propulsive and suitably moody, has the stamp of trademark GLJ to it that Jezebelites everywhere can quickly grab hold of. Same can be said with even more conviction of album highlight “World Gone Crazy,” a simmering pop burner that injects an APB-meets-Madchester type charge into the proceedings – a funk punk check, in short – while also featuring Stevenson’s most wonderfully off-the-chain shredding. Add in the lovely, affecting, Ian Hunter-indebted “How Do You Say Goodbye (To Someone You Love),” “Izitme”‘s ‘Bang-A-Gong’ed abandon, and accomplished “Cry 4 U” that, beyond its title’s distracting Prince allusion, is classic 80’s guitar pop of a type few can manage, and Dance Underwater strikes a much stronger profile than the casual observe might have allowed themselves to believe. The GLJ fanbase faithful, however, won’t be surprised a titch. They’ve known to expect this result from the moment they pitched in to its making. √√√ [Dance Underwater available here] 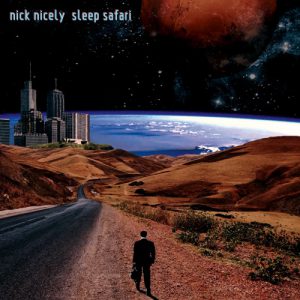 Someone that has taken some sharp, astutely self-directed detours through his chosen musical landscapes since first emerging in 1980 with the OMD-kissed, bucolic psych single “DCT Dreams,” the artist known as Nick Nicely, after 20+ years as a go-to producer helping launch rave and acid house into the midnight festival tent stratosphere (various aliases: Psychotropic, Freefall, Citizen Kaned), is back in a quietly immense way.

A musician worth a turn of the head from the very start – second single “Hilly Fields” from 1982 managed to meld Peppers-era Beatles to Kevin Ayers using incipient DIY gaffer’s tape to slyly hide the joins – that production-larded CV he’s acquired since only deepens the intrigue. It also infuses this current work with a deeply unassuming grace and confidence that makes of the subtle its own fluent language.

Meant to reflect the wildly busy subterranean planes of consciousness we inhabit while the rest of us rests, Sleep Safari, being among the most accurate and honest album titles in some time, explores with a kind of stealthy uninhibitedness those places we go once dreams signal our nightly departure. From opener “Solar Wind”‘s Harmonia-delicate persistence to the dawn-welcoming shimmer of “Dance Away” that concludes the album, all is evocative. “Gliding (Cell Centre Splendour)” captures the restless rapture of pitch night solitude, “Rainmaker” feels as if it’s on the endless edge of a peaceful agitation, the storm, with aching wonder, always just beyond the horizon of wakefulness, while “Step Away,” which immediately follows, boasts the innate mellifluity of a Kitchens of Distinction track catalyzed through a prism of gently distressed beats and a stippled gauze of synth. Later, “Souvenir,” with its busy rhythmic undercurrent and fleeting, pulled-in snippets of broadcast radio, carries within it the fluttering eyelid energy of an REM spasm.

Psych-y and haunted, bathed in swaths of diverse electronica, Sleep Safari is a chillout album for those still in fierce possession of their intellect while also presenting as a kind of counterintuitively tuneful Fluxus outing, fearlessly investing itself in a flurry of modal inputs. An impeccable piece of work. √√√½ [Sleep Safari available here] 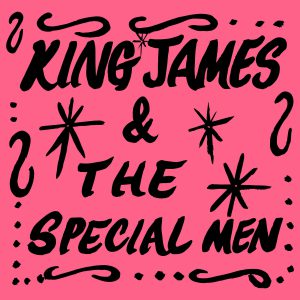 Man, this is one well-seasoned debut. Though one may expect such an opening statement when the band at hand has cut their funky teeth in the fertile musical humidor of N’Awlins, this exceeds even those presumptive expectations. Rollicking, roiling, packed with a soulful, joyous verve, this is the type music you’re always in the mood for but even if you profess you ain’t it’s gonna get you there real quick.

The record’s prodigious blow-it-out righteousness of sound can come of no surprise when the band’s lengthy Crescent City internship is taken into consideration. Any ensemble that counts among its rites of passage a 5-year residency at the infamous BJ’s Lounge followed by some four years at a couple other local dives of semi-legendary note (Sidney’s Saloon and Saturn Bar) is bound to have their chops in a row in a big way and indeed King James & the Special Men is ready right now to bowl your asses over.

While every track on the winkingly-titled Act Like You Know is attributed to the King himself – known down at the musician’s hall as Jimmy Horn – there’s little question regarding – and no bother hiding – the sacred texts upon which these tracks are based, tracing as they do a crazy fertile lineage from Professor Longhair through Wild Tchoupitoulas to the Night Tripper himself and beyond. But, y’see, the potion as it’s concocted here steps outside the swinging doors of the barrelhouses and brothels and struts down the street towards some crucial outliers. It’s a wonderful act of abandon mixed with blistering control that strays just far enough from its core source of heat to sear its first impressions deep into the listener’s virgin ears.

Percolatin’ opener “Special Man Boogie” sports a horn-sharpened, decadent elegance as if some ghost of Basin St has time-traveled back to LA’s Tropicana in 1971 to drag an already salted Tom Waits back to the town the voodoo gods intended he inhabit, all loose-limbed rolling piano and a funked-up sax vamp to boot. “Eat That Chicken” finds Good Old Boys-era Randy Newman in an out-of-the-way dive hammering out his problems in a pick-up blues band of the first water, “9th Ward Blues” is an apocalyptic “Who Do You Love” for the thrill seeker, running with a raw, breakneck tension that snarls and writhes like a junkyard dog fed a diet of amphetamines and water snakes, while “Baby Girl” is a Southern burner that carries its 12 bars of sorrow with dignity, there’s pride and even some joy in them lamentations that’s in traditional keeping with a city where death is met with a party wending unrepentant through its wrought iron-shadowed streets with every available piece of brass tilted toward the heavens.

Though I’ve no way of knowing as I write this at a remove of some twenty-five hundred miles I’m gonna go out on a limb here and say that King James & the Special Men are the type combo that, no matter how shaking they are on record and indeed the room wherein your stereo shall quake, are much better seen in their natural electrified firmament, the live stage. I have to believe that in that setting they’d make one’s mortal go immortal for the length of their set. For now, I’ll settle for putting Act Like You Know on the box and dreaming my rocky dreams until I wake up one day in the original town that never sleeps. √√√½ [Act Like You Know available here] [Feature photo by the amazing Trish Tritz]