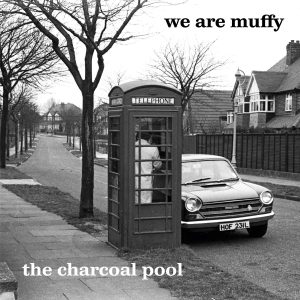 WE ARE MUFFY – “The Charcoal Pool” (Tapete Records)

One of the great things about songwriters aging is their not infrequent propensity to return, with a seasoned creative eye, to the places that shaped them, the cities or villages or hoods or what-have-yous in which the spark was spawned and nurtured. Whether said environs were, overall, enabling or, as seems more often, indifferent or even inimical to the artist’s emergence, the need to revisit, via song, the circumstantial influences of one’s youth is, by all evidence, equally intense, visceral even. It’s often the artist’s most intimate, unguarded work, resulting in a particular, peculiar audio scrapbook of the past in a particular, peculiar place (as they all are). Certainly that would appear to be the case here for the two members of We Are Muffy.

Lilac Time’s Nick Duffy along with Angeline Morrison of the Mighty Sceptres (a surname mashup accounting for the band name one must presume) discovered their common Birmingham roots while working together on Nick’s Simulacra Two album in 2016, and before they knew it songs were pouring out of them at a rate comparable to that of their origin city’s industrial output in its smokestack prime. From that onrush comes this collection of thirteen epiphanic sketches, memory postcards written to themselves from the other side of time. Flecked with swatches of English folk both ruminative and playful, woven through with bucolic pop and a kind of off-kilter bliss, The Charcoal Pool is a more-than-worthy contribution to the growing canon of work that might be termed none-more-British personal nostalgia, joining two-thousand-teens work by Wreckless Eric, Martin Bramah, Pete Astor, Paul Simpson’s Wild Swans and others.

Kicking off with “Civil Service” that, while carrying the unvarnished spirit of a colliery band in its modestly chipper rhythms, owes at least a subtle debt to the jolly drollery of Kevin Ayers at its sunniest – appropriate considering the flannel-warm texture of Duffy’s voice – we then, picking at random, travel through “Outskirts” (sorry), mournful in that loving way of remembrance, short story-rich with detail (as is the album entire, to be honest), the perk and pitch of “Frosted Candy,” Morrison’s lead vocal of a piece with the Camera Obscura school of lucent pop, “Milk Bar”‘s oddly hypnotic sparseness (that also happens to sport one of the finest keepers of a throwaway line I’ve ever heard – “give your blood away like pints of buttermilk on your doorstep“), the spooky atmospheric passageways of the title track that acts like a kind of hall of memory mirrors and is as tantalizingly difficult to turn away from as that sounds, the darkened midway of “The Map and the Light”‘s carnivalesque dirge, the brief jazzy folk byway of “Black Attracts Heat,” the impossibly poignant tinted postcard terrain of the emotional “Coloured Pencils,” its refrain of “All there is to see, nothing else to see” almost all there is to say (though to our great satisfaction more is said and with a stirring minimalist eloquence), and lastly not leastly we stand dumbfounded at the album’s final precipice as “The Last Carpenter” plays out, Morrison dropping to the lower end of her register against nought but a quiet bass and what sounds like the pluck of an electric ukulele slowed to an aching waltz, the horizon saturated with the amber glow of a hoped-for hope and how do you get more elegiac than that?

Responsible for every voice and instrument and every captured mote of ambience – even, it should be noted, handling The Charcoal Pool cover’s smart design – the pair now known as We Are Muffy couldn’t possibly announce themselves in a more ostensible manner, which is, in a way, irony inherent given the plummy lack of ostentatiousness on display throughout this sneakily accomplished debut. No way to know if it’s a one-off or not but I for one hope not. I’ve become a bit addicted to these impressionistic audio home movies. √√√½ [order The Charcoal Pool here] 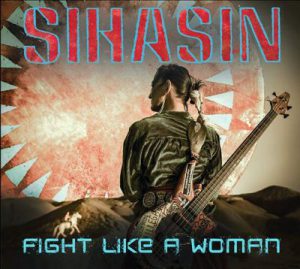 So, alright, let’s talk. Though it could be argued, if a bit tepidly, that any truly driven expression of art is a form of political statement insofar as it represents, to varying degrees, the struggle of the individual spirit against the uncaring, oppressive tide of the masses, actual visceral protest music is rather shamefully thin on the ground at a time when, to a far more existentially pressing degree than ever before, it should be raging from every basement, balcony, and bus stop. Certainly there have been moments, both blatant and nuanced (check Fantastic Negrito’s Please Don’t Be Dead for the former; for the latter Granite Shore’s exquisite Suspended Second) but overall the great collective yowl of indignation has largely gone missing, replaced by a roaring silence filled with gadget-obsessed lemmings pissing digitally into the wind while whistling Dixie – literally, in some cases – past the graveyard. Enter, then, Sihasin.

A sister brother bass and drum duo from the Navajo Nation – Jenede and Clayson Benally – who cut their teeth to a sharpened point during the twenty-plus years spent in groundbreaking punk band Blackfire (formed while still in their teens), Sihasin have recently released their second album and their first since the government fell to white-wing (sic intended) protectionist despotism. While always intending, from their earliest days, to be a force for upward change and unity, their voice here, though matured, carries with it an edge of urgency. Produced (as was 2012’s debut Never Surrender) by the pure marvel that is Ed Stasium, that fire of intention has the not-unhappy advantage of coming at you with a booming clarity.

While shot through with the punk energy the two will take with them forever, Fight Like A Woman is in the main a straight-ahead rock album that bends when necessary toward the influence exerted by their native heritage – stinging opener “Child of Fire” that seems to literally dawn on an overhanging bluff before awakening to the pound of rhythm and chanting of voices down below; the syllables of ritual “Listening?” begins with; “Big Shot in the Dark” with its tom-tom backbone; the tandem tracks that close the album, the scathing seething “Provoke You” created in direct response to the Dakota pipeline standoff and that features father Jones Benally, backed by the fury of his kids’ thunderous trample of drum and bass, intoning in Diné modulations that presage the elder’s haunting solo vocal on “Kojíléé.” Elsewhere, even as the sinuous spirits of their ancestry can’t help making themselves heard, Fight‘s songs tend to find their power by tapping rock’n’roll’s electric third rail.

“Shine,” possibly the album’s most purely dynamic cut thanks to Jeneda’s constant steady surge of a bassline, rings with aspiration and triumph, the fem-powered grunge of the title track sparks even stronger due the embedded roll call raising #metoo shivers of pride and strength, “Drive” is, well, as driving a piece of road mythos rock since, I dunno, peak Springsteen? while “Vengeance,” though studded with percussive punk anger, has enough pop suss in its melody to place it on any diner jukebox from the 70’s to the 9o’s to now.

In this moment in our history when the ugly and previously unthinkable seems to burst anew every day, staining the fabric of our culture – no matter what culture from which we’ve individually descended – abrading what shreds of faith we still possessed, voices like Sihasin’s are crucial, reminding us that regardless of how harsh and heartless the crosswinds, essential messengers don’t fade, we can still hear them despite the noise.

An inspiring listen, then, and perhaps all the more so considering you can’t really be more originally  ‘American’ than the Benally siblings. √√√¼ [pick up Fight Like A Woman here] 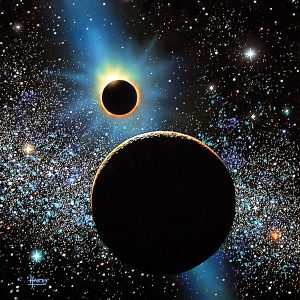 If, in response to your stated desire to experience something beyond the standard parameters of the extraordinary, someone offers you the choice of either sitting in history’s most comfortable chair and watching 2001: A Space Odyssey in enhanced VR-worthy 3D and 360° up-to-date surround-sound, or lying on your back on a yoga mat with your eyes closed listening to All India Radio’s new album Space, choose the latter. As surely masterful and provocative as Kubrick’s pinnacle achievement is, this latest outing (far-outing?) from Martin Kennedy and his band of intimate simpaticos is almost certainly the better vehicle for whatever sublime trip you have in mind.

As discussed before in these pages, few these days can reach these levels of psychedelic ambiance (though they’re more groove-based, Tycho come to mind). Ecstatic yet grounded, ravishingly solid, All India Radio take one on inerrant routes through space that could just as easily soundtrack a none-more-earthly drive through almost any imaginable terrestrial landscape (though, in truth, it would be best if the surroundings were at least nominally mist-enshrouded). From the “Wish You Were Here” Floydisms of lift-off track “Vega” that manages to seamlessly blend in some lonely pedal steel – thanks to the Triffids’ Graham Lee – to “Heirs of Ineptune”‘s throb-notic glow that finds a gently narcotized Stereolab wandering the Martian autobahn, “Holding” with its reverberant shimmer (as well Leona Gray’s radiant vocals, one of two appearances here), the synth-washed, somewhat more ominous intonations – think Morricone in a (still beautiful) digital dystopia – of “Eurydice in Scarlet” (Steve Kilbey in ‘shape-shifting enigma’ mode at the mic this time) to “Theo’s Sunlight Dream” wherein a dusty glow made of equal parts harmonies, crying celestial sustain, and quick swirling cinematic figures that deliver what its title promises, the work on Space, as with its predecessor, is almost confoundingly beautiful. One at some point in some fashion will inevitably ask a version of ‘Is this head music made for the heart or heart music directed at the head?’ That the answer is – of course – a solid ‘Yes!’ only adds perhaps to the sense of being held in suspended animation but then that’s the idea, surely.

As for listening strategies here we identify two choices. Either float along with the cosmic gist of the thing, enveloped in a pulsing cloud of beauty (while staring at David A Hardy’s cover artwork, originally commissioned for some album 45 years ago, The Dark Side of…something), or tune in with an obsessive’s clarity to these pieces’ lush construction, marveling silently under your breath. Not that it entirely matters – and anyway you’ll likely do both as if fading in and out of an immersive trance – since whichever you’re destined to come to the same conclusion: Space, as Sun Ra so often insisted, is the place, and Martin Kennedy in his guise as All Radio India is arguably your premier Earthbound tourist guide. √√√ [grab Space digitally here, on vinyl here]