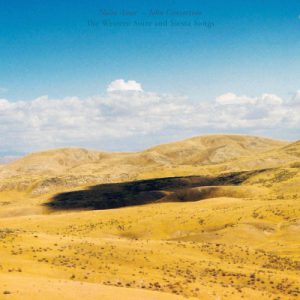 How collaboration comes together is a matter of some fascination. There seem to be as many distinct originating sparks and aspirations as there are collaborations themselves, each of them owning their own unique spot on the near-infinite spectrum that runs from purely accidental to meticulously planned. The results, too, their success or relative lack of, would also seem to populate a similar graph of unpredictability. Sometimes the most ostensibly unlikely pairing can lead to the surprisingly gratifying – the McCartney/Youth ‘Firemen’ project, which, though not a spectacular breakthrough by any means, nonetheless brought two respective giants to an inspired place of mutually beneficial anonymity – while those that might well shimmer with the de facto glow of their built-in potential either wither in the event (egos clashing, etc) or, more commonly, founder on the shoals of that too-gleaming promise, their limbs all a-tangle in an effective creative paralysis – Devoto and Shelley’s ‘Buzzkunst’ project, as much as it pains me to say, seemed designed to thwart our feverish expectations. The best, as may be sensibly theorized, grow out of the less extremist middle ground, where indeed we find the one-off partnership between French-born, Tucson-based composer Naïm Amor, author of numerous evocative solo albums and alumnus of the Amor-Belham Duo, and John Convertino, whose CV stretches back decades to Giant Sand and is subsequently as vast – and often reflective of – the Southwestern terrain that spawned him.

Naturally aware of each other (the Tucson music scene, one assumes, is not a place one tries to hide in), the coupling in this case was, timing-wise, an accident of fate – each had, in response to specific if very different circumstance, created music that was clearly in need of a balancing voice – but, style-wise, didn’t exactly stretch the bounds of credulity. Above all else, a simpatico sensibility would appear to be the cohering principle on The Western Suite and Siesta Songs, released Nov. 7th on LM Duplication.

Thus does Amor’s easy chipper cantor of cowpoke guitar and Marlboro Man whistle on opener “Round Em Up” get met by percussion not simply supportive but goading, pushing the track forward into a tidy gallop, lush sprays of cymbal ensuring a lustrous sunset at the end of a hard day’s labor. The twelve tracks tend to sort themselves into categories of mood, running from the wryly capricious – the droll playfulness of the late night-sounding “Rye Grass Waltz,” “Jelly Roll Tango”‘s slow, possibly drunken, Argentinian whisky saloon romp joining in a corner stable with “Round Em Up” – to sparse and poignant (“Señora Sonora,” crepuscular, romantic; the dusty abandoned arcade vibe of “XO Waltz;” the desert Weimar feel of closer “Before We Go” with its haunting echo of spilled memory and its brief aching quote of “And I Love Her”‘s melody hook midway) to the more obviously cinematic, rich with atmosphere and portent – check “Of Dust and Wind”‘s borderlands pre-gunfight tension, the punchy verve of “Black Boot Shuffle” that nonetheless shoulders a shadow or two as it rides into town, the perfectly-titled “Snow Falls on the Desert Plain,” silence lurking behind its compositional finesse. There is, of course, track by track, some significant overlap between, perhaps best evidenced by “Fortune Diggers,” where Duane Eddy, Ennio Morricone, and Marty Robbins meet around the campfire and blend their separate stories into one.

Add in a crafty outlier – “Tucson, Paris,” that curiously suggests a Ben Keith-visited instrumental treatment of “Gentle on My Mind” – and you end up with a record that’s both rather dizzying and grounding in equal measure. With Convertino covering all percussive bases plus piano and accordion and Amor supplying everything else but bass (filled in by hired hand Thøger Lund), The Western Suite and Siesta Songs proves just how much of a generous eloquence can result from two master craftsmen sublimating any and all ego to the devotion that creating a piece of stunning quiet beauty requires. √√√½ 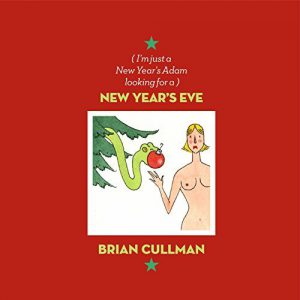 Brian Cullman’s got the Christmas blues but not of the type you might assume. As recounted in the press release accompanying his seasonal single “New Year’s Eve” (its full title, parenthetically giving away the game a bit: “I’m just a New Year’s Adam looking for a…”), the long-time music journalist and even longer-time musician, early in the course of his adventurous, peripatetic life – greater details of which backdropped SEM’s review of his February 2016 album The Opposite of Time – fetched up on an idyllic if primitive island in the Mediterranean where stray dogs and native wildlife came out to haunt the unelectrified night and where Cullman would spend his first Noël outside the warm bosom of his natal family. During that peculiar time, feeling, as he says, “both liberated and homesick,” he’d venture out nearly every night in hopes of capturing the sea-foamed music of the spheres, the melodies of timelessness made by the universe itself in all its gracious infinitude. Instead, to his utmost post-adolescent chagrin, whatever degree of mystic reception he might have enjoyed was blocked from every direction by the needling persistence of his childhood’s holiday soundtrack, “Silver Bells” and “Little Drummer Boy” and all their saccharine, begrudgingly internalized ilk. There was no escaping those seductive ditties, they filled his ears like clouds of humming, nostalgia-fed gnats and ever since then the subliminal tsunami of Christmas music that infiltrates our every waking moment come the Yuletide has been viewed by Brian Cullman as an insidious scourge. Whatever your take on the canon of old chestnuts – something of a soft spot for them myself but I am, indeed, a hopeless softie – it’s not difficult to see his point, and to, furthermore, fully understand his need to push back against this Burl Ive’d tide by penning his own festive singalong, one that’s just as catchy but a touch more libidinous.

Riding a slouchy, shuffle-blues beat and some fat, Supertramp-friendly electric piano (courtesy Glenn Patische, who’ll also provide the Professor Longhaired straight ivory piano meddlin’ instrumental break down the road a piece), “New Year’s Eve” is that warmly intoxicating blend of the lascivious and the collegially charming, maintaining its tipsy balance by skimming the surface of raunchy innuendo while upholding its winking gentleman’s demeanor (there is, after all, a tradition of etiquette to be observed here). The key may be the buried subliminal honk of that saxophone – Joihn Ellis – or it might just be Jimi Zhivago’s unobtrusive guitar chops and equally surreptitious production supporting a Cullman delivery pitched neatly between droll and duplicitous (there’s always a tone of desperation to a wooing man’s logic, isn’t there?), but the end result is a cheery entry to the catalog of adult holiday songs that has us imagining that this may have been how the night begins for that guy singing “Baby it’s cold outside,” which is exactly the (bell) ringing endorsement it seems.

But wait, there’s more! This tidy little stocking-stuffer EP also comes with a stomping, CBGB’s-recorded live track of Cullman’s 80’s band OK Savant featuring Vernon Reid’s prowling coil of guitar, a lovely lamenting blues ballad called “Minor Love” that’s actually “Bye Bye Love” taken over the nihilistic romantic cliff it was always headed for (with the Patti Smith Band’s Jay Daugherty on drums and a blistering outro solo by Sid McGinnis), and “I Know,” a lovelorn, pop-worn nugget which, aside from being the quintessential B-side, is also essentially a Leslie Winston-as-song-architect showcase as she provides the keys, added guitar, and all the programming.

So, in all, a brief but quite sure-footed diversion, a perfect just-the-thing antidote to this hectic – and, this year, particularly fraught – holiday season. √√√ 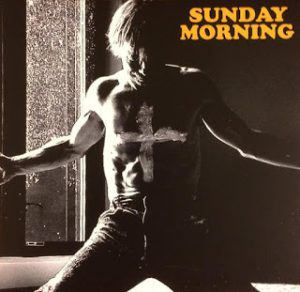 First off, it’s fine with me and I assume most writers if what we’re sent for our consideration is described simply as a ‘rock’ record.’ While commiserating with a band’s – or publicist’s – need, especially in the current oceanic environment, to slap an adjective out front that most basic of four-letter words as a distinguishing brand (‘art’ is the choice this time around), the fact is there’s every chance we’ll respond with a warm, nostalgia-glowing gratitude to an effort offered, in all honesty, as a rock record, so long as it’s sinceer and unself-conscious in its application of that template (the opposite, then, of a ‘rawk’ record if you catch the distinction). Second, Sunday Morning has done a very fine job of creating exactly that in their eponymous debut, self-released December 23rd.

Hardly neophytes, the Vancouver-based collective centered around writer/artist and vocalist Bruce Wilson and collaborator/keys guy Stephen Hamm, both ex- of Tankhog (so you know, wise not to take cues from that fact), boasts a who’s-who involvement of that city’s illustrious music scene, including members of Bif Naked, Pluto, Coal, the Be-Good Tanyas, Spectres and many more. It’s a local talent dream-team of sorts that indeed brings the goods, resulting in an affecting, at times forceful addition to the long and legendary rock tradition.

Exhibiting nous enough to begin the album with a cello-drenched plaint – “Come The Rain,” a slow waltz piano dirge that posits the equation “hope = pain absorbed” – Sunday Morning clearly harbor no doubts as to their capabilities, a point thenceforth proven many times over. “Can’t Find You” picks up the pace though with a deliberate restraint, a plangent yearning, and a plummy bass thrum like Rumours-era Fleetwood Mac having their LA sunshine replaced by the rhythmic fall of a steady northwest rain, the horn-driven “Sick In The City,” about exactly what you think it’s about, suggests Iggy circa New Values backed by – as editorial coincidence would have it – Graham Parker’s Rumour (even truer on the frenetic “Uptown” that follows it), while the wonderful testifyin’ “Hearts Break” takes advantage of Carmen Bruno’s bristling, salvation-bringing vocal turn and guitarist Kevin Rose’s preposterously good wah-wah fuzzed guitar outbursts to become the album’s soul-rock centerpiece. Couple skips forward we come to the funk-stewed “Dirty South” that burns with an early-70’s Stones mojo, the track in the constant pressurized process of coiling and uncoiling, coiling and uncoiling before “The Change” ups the groove by coming on like Thin Lizzy fronted by Bobby Charles. The capper, though, arrives at the very end with “When Sunday Morning Comes,” Wilson ceding vocals to the wounded bird beauty that is Leah Commons’ voice, imbuing what’s already a poignant and emotionally transfixing song – the production and mastering throughout is stellar, here it surpasses itself – with an unbreakable fragility and a sunrise clarity of tone that amounts to nothing less that a redemptive wisdom, not least as it’s set against the constant shimmering haunt of Hamm’s church-escaped organ.

So, yeah, in the so-called larger scheme of things (if such still exists in the music business), this is a tiny release from an often under-represented corner of the continent but don’t let that matter. Sunday Morning the album by Sunday Morning the band is that rarest of offerings in our benighted age, a literate rock’n’roll record that, even in its necessarily quiet and lucid moments, just literally out’n’out rocks. Rather masterfully, in fact. √√√½