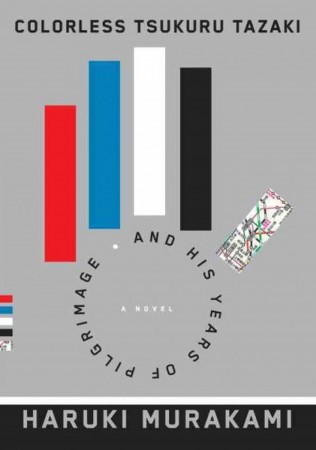 Music defines Haruki Murakami’s life, imbuing every aspect of all his passions. Over 10,000 records line the walls of his Tokyo office, and before becoming a full-time novelist, he ran a jazz club called Peter Cat from 1974 until 1981. He titled two of his greatest novels – Norwegian Wood and Dance Dance Dance – after hits by The Beatles and The Beach Boys. And, a marathon runner, he trains while listening to The Beach Boys and The Lovin’ Spoonful.

But it’s classical music – another Murakami love – that gives Murakami the title of his latest novel, Colorless Tsukuru Tazaki and His Years of Pilgrimage. The title comes from Franz Liszt’s three-suite work Anneés de pèlerinage, which translates as “Years of Pilgrimage.”

The eighth part of the first suite – “Le mal du pays” (translation: “Homesickness”) – bonds the five main characters (they all play and/or listen to the piece throughout the novel) as they voyage through the “years of pilgrimage” of their mid-30s.

Murakami’s literary antecedent in writing about one’s mid-30s as a time of a despondent and confusing quest for meaning is, of course, Dante and his Divine Comedy. And the quest of Dante’s protagonist ends happily, as does the quest of Murakami’s protagonist, Tsukuru Tazaki.

The novel begins with Tsukuru – a railroad station designer in his mid-30s – in the depths of despair, contemplating death and feeling that his life is over. To paraphrase Dante, Tsukuru is midway through the journey of his life, in a dark forest, in which the straightforward pathway has been lost.

Tsukuru experiences this sense of homesickness because his four best high school friends – Aka, Ao, Kuro, and Shiro – inexplicably discontinued their friendship with him when he left their home city, Nagoya, to study railroad design in Tokyo. He spends a lot of his time (roughly 15 years!) wondering why he was suddenly abandoned, timidly afraid to seek out his friends to find out the answer. Instead, he listens to “Le mal du pays,” a song that the musically gifted Shiro used to play on the piano.

“Le mal du pays” is a meandering piece, a sadly beautiful reflection of the homesickness that Tsukuru feels without the certainty of the lost friendships of his youth and his inability to derive a rational explanation on his own for their departure.

But Tsukuru – caught up in rational thinking – doesn’t count on the entrance of the irrational into his life. Just as Dante has his Beatrice, Tsukuru has his Sara, a girlfriend who encourages him to have faith, visit his friends, and ask them why they left him so bereft and despondent.

Upon visiting the successful businessmen Ao and Aka in Nagoya and Kuro in Sweden, Tsukuru learns that Shiro has told them that he had raped her. His high school friends all say that Tsukuru isn’t capable of such a heinous crime. They also inform him that after suffering years of mental health problems, Shiro had been brutally murdered. They couldn’t risk disrupting Shiro’s fragile health when she was alive by allowing Tsukuru back into the group.

It’s no accident, then, that group fell apart. But it only fell apart in the sense that Tsukuro, Ao, Aka, and Kuro don’t see each other any more. The group, in all reality, stayed together, through their common feeling of homesickness. And it took Tsukuro’s – in Kierkegaard’s terminology – leap of faith when he chose to visit his friends to make them understand that homesickness can be just a phase of life, a crucial part in their years of pilgrimage.

And just as Beatrice awaits Dante at the top of Mount Purgatory, Sara awaits Tsukuro back in Tokyo, ready to move on to the next phase of their communal pilgrimage.