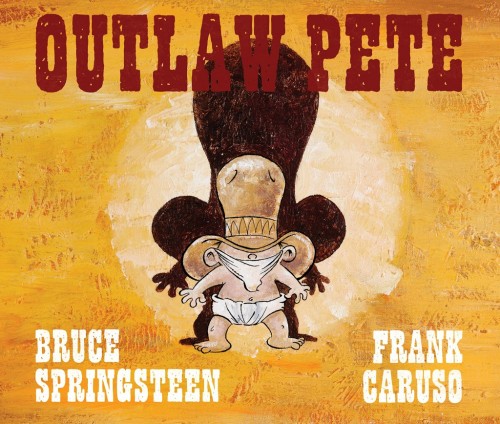 I’m too old, too biased, and too much of an unabashed Springsteen lover to do Outlaw Pete the critical justice it deserves.

Turn my review over to my twin 11 year-old girls, who for this review shall be renamed “Thunder” and “Road”?

Yes. (Note to self: make sure to find a way to make the new names stick.) 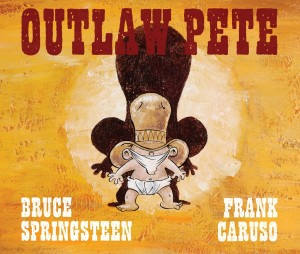 R: …slash songwriter. He also plays guitar – and his wife sometimes sings and writes songs, too. She’s in his band and sings and plays the guitar.

SEM: Do you know any Bruce Springsteen songs?

R: “Thunder Road.” The one with the American guy. You have that album—on the cover he’s wearing the bandana, and jeans, and the tank top…(searches for the record).

T: “Born to Run” and the jungle song…

R: He wrote a lot of stuff; I just can’t remember.

SEM: Do I listen to a lot of Bruce Springsteen?

R: And you sing a lot of his songs, too, and play them on the guitar. Like “Born to Run.” 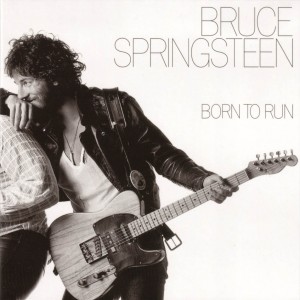 SEM: What did you think of the book?

R: The pictures were nice. I like the different things he uses. The baby and the baby’s shadow. Some is in comic-book style, the rest is in paint. I like the picture with the horse frozen to the ground.

T: I like the cartoon, like how he put the cartoon onto canvas and paint to make it cool, I guess (laughs). The pages—the little verses—they rhymed.

SEM: Did you know that the book is based on one of Bruce Springsteen’s songs?

SEM: Have you ever heard the song?

T: I think so? It seemed like one of his songs.

SEM: How did you know it was one of his songs? It’s actually from his album Working on a Dream.

T: If you read it without the pictures, it would be more of a poem than a book.

R: It was deep (laughs). It was about someone trying to get away from his sins in the past and killing himself in the end or getting frozen to the ground—I don’t really know what happened.

T: It was about this Baby Pete, who was a thief and a murderer. He stole a mustang and was causing havoc in the town. I think it was in the Old West because there were Indians, and it was dusty and stuff. He married this Indian girl, this guy’s daughter, and he kept yelling off a cliff, “I am Pete!” I don’t really don’t know why he was doing that.

He keeps living with his family and doing just family stuff—keeping quiet. But then this bounty hunter comes along who doesn’t like him because he was causing havoc in the town. He comes across him one day while Pete was fishing, and was going to kill him with a gun. But Pete took a knife out of his boot and threw it into the bounty hunter’s heart. As the bounty hunter was going down, he said, “You will never escape what you’ve done.” And then Pete felt bad and tried to commit suicide or something. 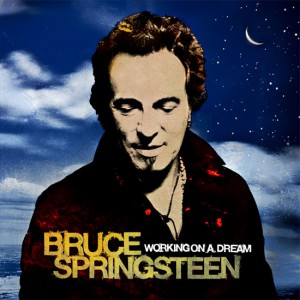 R: Bounty Hunter Dan was kind of fat looking and probably wasn’t too smart either (laughs). Well, he was smart but in a not-so-smart way. He told the Pete dude that he couldn’t run away from what he did in the past. Pete kind of went crazy and was yelling a lot then. Then he jumped off of the cliff or got frozen or something.

T: Then the wife or daughter found a piece of his clothing. She found it and braided it into her hair, and then she started screaming off the cliff, too. Nothing else of Pete was there; he was like…GONE. So she started yelling, too, which is kind of a family trait.

R: And the thing she braided into her hair was buckskin.

R: I liked that everybody yelled off the cliff for no reason! (Laughs.)

T: I liked the art, and I liked how he was a baby in the beginning with his diaper. Who changes that diaper? (Laughs.)

R: I don’t think they had diapers in the Old West. I think they just had cloth. Plastic wasn’t invented then!

SEM: What age group would you say this book is meant for?

T: If it were just for five-six year olds, there would just be the cowboys or something. But if you’re 16, you kind of get the point of it.

SEM: Would you recommend the book?

T: Yes. I was also wondering—is this based on a true story? But I think it is a tall tale, like Paul Bunyan.

SEM: Let’s listen to the song.

R: I want to read along…

You can purchase Outlaw Pete here.