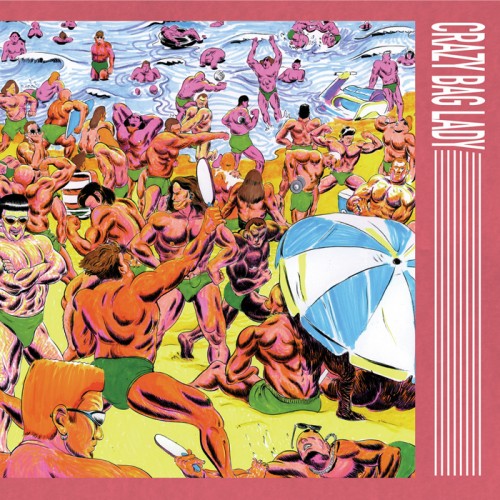 In an article on Parquet Courts, The Guardian’s David Stubbs wrote, “For punk precursors the Ramones back in the 70s, fast, basic and short was their antidote to a rock world that had become too baroque, aimless and decadent; one which needed jolting back to its exhilarating beginnings.”

Along with Parquet Courts, Stubbs put Pink Flag-era Wire, Minutemen, The Residents, and The Fire Engines in Joey, Johnny, Dee Dee, and Tommy’s speedy, catchy, and above all, high energy camp.

Crazy Bag Lady’s new album, Hunks (out now on Retro Futurist Records), is their permission slip to set up their tent alongside these six great bands. They don’t even need a signature. They don’t even need to get on the bus to the camp. They’re already there. Hunks alone signs and seals the deal.

Did you see Louis CK’s so-called “controversial” SNL monolog? The children of social media are abuzz with manufactured and predictable moral outrage over a slice of comedic social criticism and satire that they were simply too thick to get.

The Tweeters and posters should have been outraged by Rihanna’s “musical” performance that was just as “aimless and decadent” as anything the most pretentious prog rockers were releasing when Ramones and Wire took them on and changed the world.

Crazy Bag Lady should have been asked to perform and not Rihanna. I can imagine vocalist Josh Sterno stomping the stage, flanked by guitarist Derek Lynch and bassist Zak Barnum and powered by drummer Daniel Lynch. I can imagine the four guys playing their Hunks material and providing the same kind of jolt and exhilaration of which Stubbs speaks.

All I need to prove my point is Hunks. The record begins with a solo Daniel drum intro, which propels the band into the high-octane opening cut “Walkmen.” Derek and Josh soon enter, and you’re instantaneously reminded of another memorable opening track: “Blitzkrieg Bop.”

So Crazy Bag Lady love Ramones. Who doesn’t? And the band’s melodicism and sense of fun – from “Walkmen” to “Out of the Way” to “Fan of Yours” – indicate that they sip from the same cup as their four Queens predecessors.

But the band and their Hunks show that they have other cups at their bar than the one they share with Ramones. For starters, they have groovy musical structures that derive from their expertise on their instruments.

Derek is capable of monstrously aggressive and creative guitar riffs – check out “Mobile Phone,” “Drunk Leaf,” and “Sexy Bully.” And, always complementing Derek’s jams, the Zak-Daniel rhythm section is equally inventive. Listen to Zak’s groovy playing on “Timehead” and “Intention.” For that matter, listen to Daniel’s unexpected and innovative work on “Walkmen,” “Appetite,” and, in particular, “Out of the Way” – his finest performance on the record.

It must have been a blast for Josh to create over such robust sonic bedrock. He and Daniel share the lyric writing duties, but it’s up to Josh to deliver them in a compelling way. He’s a diverse vocalist, who can sound melodic, intense, and everything in-between. But, above all, he has that rare ability to sound catchy and intelligent. You’ll just have to listen to tracks like “Fresh Fruit,” “Swatter,” “Sexy Bully,” and “Late Loves.” He’s like Henry Rollins or Colin Newman.

Kylesa’s Phillip Cope’s production is spot-on. He’s on a roll now, finding a groove in producing fast-paced, high-energy, punk music. Wet Socks’ Drips (one of the finest records of last year), Abacus’ En Theory, and Burnt Books’ Where There’s Smoke There’s Fire are all the evidence you need. They’re also proof positive that Kylesa’s Retro Futurist label is releasing the finest records from what I can only call the Columbia-Savannah musical renaissance.

Pick up Hunks and get in on the action. More, allow it to introduce you to a scene that’s producing some of the best music on the planet.