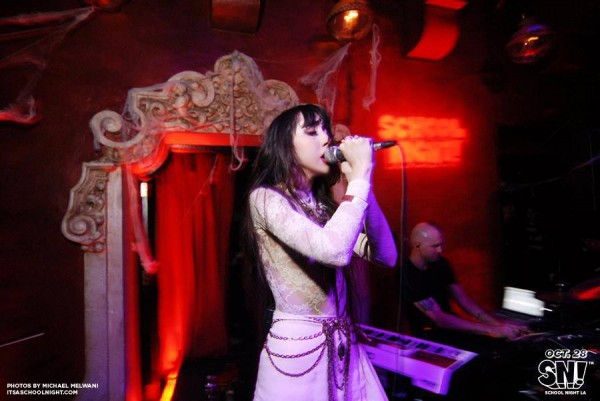 On Tuesday, March 24, Nostalghia brought the self-styled “apocalyptic gypsy punk” of their debut album Chrysalis to the sold-out Pabst Theater in Milwaukee, Wisconsin.

Lead vocalist Ciscandra Nostalghia, cellist Adele Stein, and multi-instrumentalist Roy Gnan cast a spell on the crowd that lasted the length of their 45-minute set.

Clad in a flouncing white skirt with what looked like a print of the Virgin Mary, and with her near knee-length black hair shimmering in the spotlight, Ciscandra commanded the stage. As she swayed to the music and clutched her microphone to her mouth, she embodied the music, delivering a vocal performance of which many singers just aren’t capable. The audience couldn’t take their eyes off her.

Standouts abounded, but Ciscandra particularly shined on show stoppers, such as “I’d Still Kill You,” which demonstrated her vast vocal range. The high-register vocals on this track were quite simply astonishing, whereas the singing on “Homeostasis” impressed with its guttural intensity. And the screaming on “Cool for Chaos” was unforgettable.

Stein and Gnan complemented Ciscandra to perfection. Stein’s cello not only supported the singer but also created a through line that provided the set with sonic cohesion. “Sunshiny Milk” and the before-mentioned “I’d Still Kill You” were just two examples of the ways in which Stein’s musical bond with Ciscandra was central to the foundation of Nostalghia’s set.

This foundation allowed Gnan to explore different aspects of his musical talent. At various points of the set, he served as drummer, keyboardist, and programmer, handling all his duties with passionate virtuosity. “I Am Robot Hear Me Glitch” showcased his skillful keyboard playing and drumming, accompanying Ciscandra on one of her most emotional ballads. And the innovative metallic beats of “Meek” were the launching pad for Ciscandra to take the song into the stratosphere.

In 2014, Nostalghia released Chrysalis – and proved that they’re capable of delivering a classic debut. Now, it’s 2015, and Nostalghia are proving that they’re one of the best live acts around. The band’s future seems rather set in stone, doesn’t it?