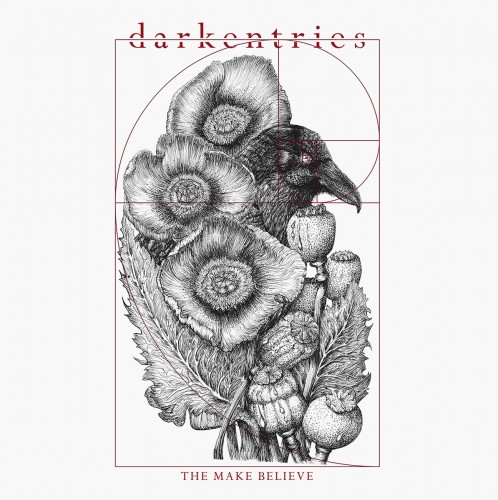 Darkentries’ The Make Believe is the third release on Kylesa’s Retro Futurist label and one of the most original and emotionally gripping records you’ll hear this year.

But knowing these genres is just an entry point, a way to step inside of and configure yourself within music that sinks deep into your soul and forces you to experience the extremes of your emotional life. Darkentries are after catharsis for themselves and for you—and they deliver.

Stereo Embers Magazine sat down with Caughman for an in-depth interview.

SE: How would you describe The Make Believe?

RC: It is dark. It’s really, really, really uncomfortable, dark, heavy, and yet melodic. It means a lot to each of us emotionally. 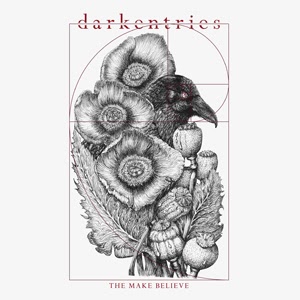 SE: Did the music that you made in your previous bands sound anything like this?

SE: Who are some of your influences on your melodicism?

RC: Jonathan and I have always listened to a lot of post-rock music—music that’s instrumental a lot of the time, so the instruments have to carry the melody to keep it interesting. I can’t really give specific artists because there are just too many at this point (laughs). We aren’t even sure at this point who we picked everything up from (laughs).

SE: There’s an interesting dialogue on The Make Believe between the melodic guitars and Hampton’s screamed vocals. He almost screams in response to the guitars!

RC: Yes. Jonathan and I had written almost all the songs as they are, and then Hampton would put vocals on top of it. We would send him demo tracks, and he would just listen. We really didn’t know what to expect from him because his voice has been constantly progressing over the last couple years. When we went to record the record, he just kind of went at it.

Hampton listens to a lot of The Cure and Sisters of Mercy. Those goth vocals are kind of drone-y sounding. He took a lot of influence from that. It’s less about the melody and more about adding an extra instrument.

SE: One of the things that I found most inspiring about The Make Believe is how its structures and intricacies demand that the listener pay full attention to get the full experience. It’s inspiring that a young band makes such demanding—and rewarding—music in an age of short attention spans. Care to comment?

RC: I’m actually really glad you mentioned that. That goes hand-in-hand with the music being uncomfortable. And it’s for that very reason that it takes a lot of listening because there’s just so much going on. We don’t tend to repeat parts in the songs. The songs are journeys. It’s part after part after part.

Josh’s drumming is the most constant thing. He really keeps that rhythm section going in a very interesting manner. And we feel that that hopefully will keep people captivated throughout the uncomfortable melody and dissonance between us and the vocals and the bass. Josh is the driving force behind all of that.

RC: Brad tends to play the root notes because there’s so much going on as is. He does have times here and there where he will pick out his own melody. Sometimes we’ll try and lie back and let Brad shine in those parts. And he does so many vocals on the album as well that playing mainly the root notes allows him to focus on both things.

SE: Who else sings on the record in addition to Hampton and Brad?

RC: Brad does about 25 percent of the aggressive vocals apart from Hampton’s. The clean vocals on “Honey Eater” and “I’m Tired of Being Awake”—Josh actually recorded those.

SE: Does Josh sing those parts when you play live?

RC: He actually does not. I’m not exactly sure why we haven’t ventured into that area (laughs). Josh has been in bands before where he has sung and played drums at the same time, and I think that he did that for so long that he just wanted to focus on drums, so Hampton covers those parts for now.

SE: Can you envision a track on which all four of you sing?

RC: (laughs). Truthfully, yes. I think that on the next record, we will probably—at Hampton’s choice—we definitely will venture into us four doing vocals together and possibly some harmonizing and such just to keep some interest because we think that’s something that we have that might be unique in the future.

SE: Are any of the songs different in their live incarnations?

RC: We try to replicate the record as well as we can. As I mentioned earlier, Josh doesn’t sing the parts that he sang on the record live. But that’s the only thing that we don’t replicate live. We mainly try to sound exactly like the record.

SE: What’s the purpose of that?

RC: We want people to feel the raw, natural aggressiveness live that we feel that we were able to capture on the record.

SE: What else can you tell us about playing live?

RC: House shows have been our most comfortable place for the past year or so, before we came out with The Make Believe and were just playing the old EP and some of the singles we had put out. We like the feeling of playing crammed into somebody’s house (laughs). I almost feel like it was more emotionally pleasing for us than playing on a stage.

SE: Why is that? Because you have an intimate connection with the audience?

SE: Would you talk about how Kylesa became interested in you guys?

RC: Burt Books is a band in Columbia that we’ve played a couple shows with in the past and are pretty well connected with. They’re really great guys. Troy Thames is in that band, and he had talked to Jonathan about Phil [Phillip Cope, the leader of Kylesa] starting a record label called Retro Futurist. He and Phil are friends, I believe. So Jonathan found that very interesting because we had heard of Kylesa before and were definitely into their music. So Troy really liked Darkentries’ music and thought that it might fit the bill for Retro Futurist.

Troy sent us Phil’s email. We just took a shot in the dark and emailed Phil and said, “Hey, we have this record, and we’re interested in putting it out for the world somehow. We’ve been waiting for a while.” He emailed back and was interested in hearing it. He also said that he had heard our name before around Columbia. We emailed him the record, and he emailed back fairly soon with high regards and a lot of nice things to say. He felt really strong about Retro Futurist, and that struck us as a really cool thing. These guys are creating something that they’re really passionate about. And it just kind of took off from there.

SE: How do you feel about being on Retro Futurist?

RC: It excites us a lot. We are excited to be a part of a label that we see growing a lot in the future. We’re really excited to catch the beginning of that. We feel strongly about their abilities, and they’ve treated us significantly well since meeting them.

SE: In what formats will The Make Believe be released?

RC: It’s going to be coming out on a 12”. That is being pressed at the moment by Retro Futurist, and it’s set to come out on March 25. We’re probably going to want to put it up on iTunes as well.

SE: It must be great to have your record come out on vinyl!

RC: We are extremely excited to be able to hold a vinyl in our hands, and it be that record.

SE: Tell me about the album cover. It’s amazing.

RC: Our good friend Evan Roper who lives in Greenville, South Carolina was the artist for that. We didn’t tell him to do something specific to draw. We actually just sent him the record and told him to listen to it and draw whatever it makes you feel. We trusted him a lot. We’d seen some of his work previously and were big fans. He started sending some rough drafts of that, and we were like, “Wow! That’s it!” (laughs).

SE: When I saw it, I was reminded of Edgar Allan Poe’s “The Raven.” It matched the music and was real fitting for the Southern Gothic. It’s also different from the covers of the other two Retro Futurist releases.

What are the plans for touring?

RC: As of now, things are local. Every now and then we may travel a little ways to play a show. But we are talking about in the summer maybe doing a week to just kind of start things out for us. We don’t have a necessary means of transportation because it’s never been something that we’ve been worried about until we put out the record. We’re definitely planning on maybe touring the East Coast a little bit this summer, but as of now, those are the only talked-about plans that we’ve had.

SE: Is the band taking off at a faster rate than you anticipated?

RC: (laughs). It definitely is. It’s interesting to point out in light of that that we never really had any expectations from this band or this record. I mean, we wrote the record because we wanted to—to help make sense of things in our lives at that time. When we went and recorded it, that was the only time that we thought about someone helping us put it out.

SE: What’s the relationship of Darkentries to other great heavy bands from the Southeast, like Mastodon,  Kylesa, Baroness, Torche, etc.?

RC: It’s great that those groups were able to set such a good standard for the Southeast for sludge metal and metal in general. We all listen to those bands. We’re not grouped in the same genre, but just the fact that those bands exist in the Southeast and made a name for themselves under such cool genres as sludge metal is a positive thing for all the bands trying to grow out of this region right now.

SE: What do Darkentries add to the region’s music?

RC: I don’t know (laughs). For the longest time, we wanted to consider ourselves atmospheric in a way. We felt that that was something that maybe people around here hadn’t really delved into yet.

Something that we started coining was referring to it all as heavy music. It’s cool to have the sub-genres to identify yourselves more appropriately, but since this all happened, the guys and I tell people that we play heavy music. It’s kind of a genre of its own.