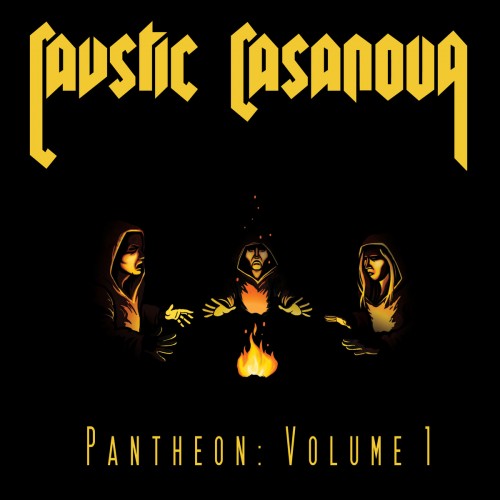 Anthemic, infectious, powerful, uplifting – these are only some of the adjectives that come to mind when you play Pantheon: Volume 1, the single that Caustic Casanova have released on their Bandcamp site.

Caustic Casanova hail from Washington, D.C., and their sound on Pantheon: Volume 1 hints at some of the great bands from that city, especially Rites of Spring and Fugazi. Add some Nirvana and Hüsker Dü melody (on records like Flip Your Wig and New Day Rising) and some Mission of Burma intensity, and you have a band that has all the right influences.

But influences only go so far, as Pantheon: Volume 1 attests. Bassist and vocalist Francis Beringer, drummer and vocalist Stefanie Zaenker, and guitarist Andrew Yonki know how to make things new.

Caustic Casanova’s most recent LP, Someday You Will Be Proven Correct, proved this all too well. It was an eclectic monster of a record that should have made every critic’s Top 10 list in 2012.

Beringer and Zaenker appeared on Someday, and now, with the addition of Yonki on guitar for Pantheon, Caustic Casanova are even more formidable. They’re stronger, tighter…

It’s no wonder, then, that Yonki gets “Glossolalia” – the first song on Pantheon – started with an energetic and melodic guitar riff, which leads to Beringer’s anthemic and catchy vocal melody, supporting it note-for-note.

But the band doesn’t settle with great pop-punk. They stop the pop mid-song and create a noisy and quite beautiful soundscape that resolves into a tremendous Yonki guitar solo, to which Zaenker contributes the rumbling fury of her drums.

Caustic Casanova save the best for last on “Glossolalia.” As Yonki takes the song to new heights with some high-pitched notes, Beringer and Zaenker trade off vocal parts, the former carrying on the melody and the latter screaming the band to some chunky, song-ending riffing.

“Forever My Queen” is the second and final track on Pantheon. It’s a cover of a song by the D.C. proto-metal band Pentagram, and it sounds like Black Sabbath decided to condense their sound into a precise 2:30 single. Yonki is so good on this track that the riffs, solos, and tone sound like they could have come out of Tony Iommi’s amp, and Zaenker rocks as hard as Bill Ward ever did.

But Beringer is no Ozzy on the track – and that’s a good thing. The melody, which he sings with an introspective desperation, belies its confidence only to demonstrate the insecurity of the lyrics.

If you ever wondered what it would be like to hear Robert Smith or Ian Curtis front Sabbath, you’ll know after hearing “Forever My Queen.”

And, after hearing Pantheon, you’ll be ready to hear what promises to be a fine forthcoming Caustic Casanova release on Retro Futurist.

You can purchase Pantheon: Volume 1 HERE.