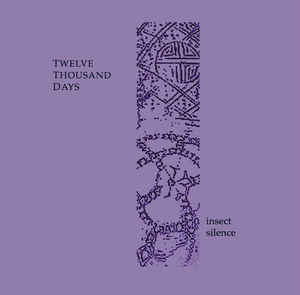 I have joked with the duo in Twelve Thousand Days about how long it’s been since they’d put anything out. They would assure me it was on the way. It has been approximately 4,313 days since the last album, From the Walled Garden. The time has come. It found its way. The years of yearning all melted away within seconds of spinning their newest creation, Insect Silence. As the whimsical interplay between Martyn Bates and partner in crime Alan Trench come spilling from my speakers, I can easily say, “All is forgiven lads!”

You no doubt recall Martyn from his stalwart band Eyeless in Gaza and multiple solo and collaboration records with the likes of Mick Harris, Anne Clark, Max Eastley and Troum. Alan too has had a long and varied career playing with The Moon Lay Hidden Beneath a Cloud and Nurse with Wound as well as his myriad bands – Orchis, Temple Music, Howling Larsons and Black Lesbian Fisherman to name but a few. Alan was also co-founder of the infamous World Serpent Distribution which scattered Goth and Neo-Folk releases worldwide before he left in 2003.

There are so many wonderful moments to absorb in this thirteen track wonderland. Opener, “Death Went Fishing” is an interpretation of a classic Greek rebetiko (loosely translated ‘blues’) by Giannis Papaioannou, the recording of which may well have included the downing of an Ouzo or two. Whatever the case, it sounds indicative of the fun and friendship these two have. Or these three, actually, as this is one of 2 tracks (the other being ‘Pathless’) with an uncredited performance from the second “eye” in Eyeless in Gaza, Mr. Peter Becker.

There are four tracks featuring words by W.B. Yeats that Bates recorded with Electro-Ambient duo Troum in 2006 for the Mad as the Mist and Snow collaboration. Here in an acoustic form, you get a warmer perspective made magic Alan’s production that is key to the 12KD “sound”. Any follower of Martyn’s solo work can attest to the abilities he has of setting Yeats (and Joyce) to the most hauntingly beautiful tunes.

Four instrumentals grace the album; “Night Harmonium (Return),” “Old Ladies as Birds,” “Fieldwork,” and “Red and Golden Fire.” Each are referred to as ‘whistle-tunes’ by Martyn for obvious reasons when you hear them. These are so expressive and allusive. They take you to places in your mind where that box of old photographs lives, sending you somewhere without leaving the comfort of your chair.

“Errant Desires” is a song that renders my typing useless because there is no real way to describe it. You want to bottle it and spray it all around you. It’s the aural equivalent Klimt’s painting, The Kiss, with lyrics so delicate and exquisite: “we cup our hands to catch the rain’s fall / each drop both separate and conjoined / in tiny worlds that ripple outwards to lap at last on distant shores .” Divine.

The true crowning jewel here is ‘Pathless’. Coming in at almost sixteen and a half minutes, you are taken on a pseudo-psychedelic trip that begins innocently enough before meandering into territories Tangerine Dream wouldn’t have, um, dreamed of. Kaleidoscopic whirls of vintage synth fill your head and the track ends in an almost Dr. Who-ish fashion.

Then there is the breathtaking beauty of “She Raises Her Eyes,” its angelic vocals and chiming strings weaveing an ethereal, comforting blanket around you. The lyrics of the second movement seem to give a nod to older Eyeless songs “Kodak Ghosts Run Amok” and “The Feeling’s Mutual.” One is reminded of Tudor-era Court Dances as the song plays to conclusion.

This truly was worth the wait. Alan and Martyn have added another mystical piece to their growing discography together. It is, without a doubt, a progression in their sound that not only thrills in the moment but gives strength to the prospects for the future as their work hopefully continues. This is a limited edition of only 500 CD’s, so you’d be well advised to act quickly by going here.