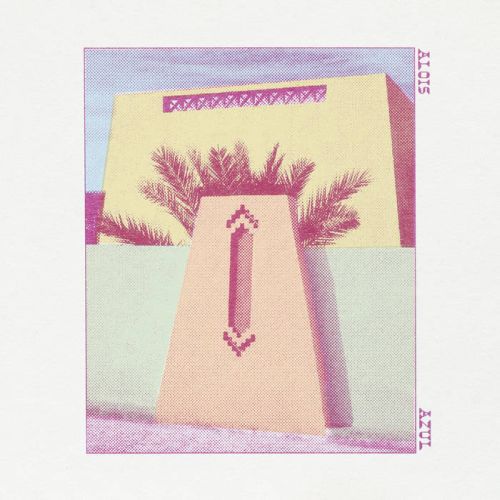 Swiss art-pop project Alois returns with Azul, a stunning record full deep-summer melancholy neatly wrapped up in lush, tropical, synth-based soundscapes. It’s a collection of songs perfectly suited for outdoor festivals and roof-top parties. Mellow and atmospheric on the surface, but nice and heavy on the groove.

Stereo Embers caught up with Martin Schenker who talked about the band’s creative process, jazz as their live blueprint, and also how it feels to release dancefloor-friendly music at a time when clubbing is restricted…

Stereo Embers Magazine: Hello Martin! So good to reach you and to find out more about your latest album. Mints, your debut record, was received really well in Switzerland. Did you feel any pressure because of that while writing Azul?

Martin: Mints was awarded in the Indie Album of the Year category. This came as a surprise to us, as we were just starting to figure out our identity as a band. Back then, we were under no pressure except our own. We wanted to create a record with the type of music that we’d like to perform on stage and dance to.

For this record, it was important for to me to dig deep into various musical cultures and see how they treat rhythm and sound in general. As a result, we created this hybrid that mixes analog sound and electronica. It was a long process, trying to translate my emotions into music, and being able to channel all these sonic influences. It wasn’t easy, but I’m happy how it all turned out.

SEM: After Mints, you expanded your line-up. What was the reason for this?

Martin: The idea for the new record materialized at the same time as we were discussing the possibility of expanding our line-up. Most of the production actually happened before Luzius Schuler joined us. He’s super-important for our sound; he’s a synth wizard! To have him on board expands our creative possibilities, especially on stage.

We all come from a jazz background, so we all love to improvise and love this freedom that it gives us on stage. By the way, Luzius is going to release a beautiful solo record real soon, [so] watch out for it.

SEM: Your songwriting process, if I’m not mistaken, has two stages: sketching the main idea out on a sequencer and then fleshing it out with the whole band. How much do these initial ideas change once the whole band steps in?

Martin: For our new album, the ultimate goal was being able to eventually dance in front of our speakers. To get there we used a trial-and-error method. Some of my ideas are just moods, instrumental beats, and others are nearly finished songs.

Often, I start by working with Flo – who’s also involved in the production –  and then two of us figure out what’s missing, and then we bring in the rest of the band. For the most part we stick to a core idea; it could be a percussion pattern or a sentence or some weird synth sample. Sometimes, the main idea transforms into something completely new!

This record turned out to be very electronic, and way more sequencer-based. We recorded some live sessions for YouTube. I think it’s a good example of how we adapt our songs to a live setting.

SEM: Do you ever revert back to the original idea?

Martin: Yes! Many times we had to go back to the earlier versions of the song. I guess that’s the downside of a recording process using digital tools. You constantly need to deal with the temptation of changing your shit. That’s also why I love the idea of us challenging ourselves by working with analog tape in the near future.

SEM: Have you been writing any new material during the lockdown? I could imagine a lot of new things were created during this enforced hiatus.

Martin: Yes! We’re currently working on a new EP, and there’s no doubt that we’re going to release it next year. Before that, we’ll be releasing a collaborative project with Skiclub Toggenburg. They’re two Swiss modular techno producers. This will come out in September, on a super-limited 12-inch – even more material for the dance floor.

SEM: When is Alois finally going on tour?

Martin: We’ll be touring Switzerland in September and October. Unfortunately, our tour with Klaus Johann Grobe, in Germany, got cancelled twice already! I don’t know; I guess we need to be patient and find other ways to communicate with our audience. This could also be a chance for us to focus more on writing and production.

SEM: How do you think live shows, as a social ritual, have changed as a result of the pandemic?

Martin: I just went to see L`Eclair and people went just as crazy as they did a few months back. I’m no oracle or anything, but I believe that once the restrictions will fall away, people will go out to parties and gigs again. I don’t know if they will interact any differently.

The more pressing question for me is if the musicians, clubs, and festivals can survive this financial crisis. The lockdown showed me that live streams and online events work just fine, but nothing can really replace a mind-blowing gig that you see with your own two eyes. It still has a huge value.

SEM: Is there anything else you would like to tell our readers?

Martin: Thank you for taking the time to listen to our music and to other independent artists from Switzerland. We’re a part of a small label called Red Brick Chapel; it’s like a collective of musicians that happens to feature some of our favorite artists! Check it out.

Find out more about Alois