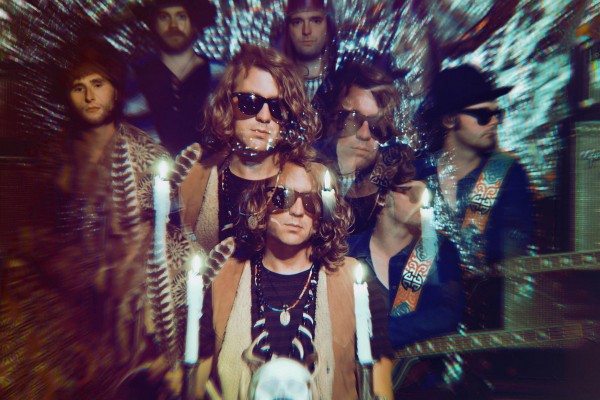 Discovery and progression: these two words best describe the music of Magic Castles, the Minneapolis-based psych band led by Jason Edmonds. The new Magic Castles album, Starflower (which comes out tomorrow on Anton Newcombe’s A Recordings), is the innovative product of hard work, much revision, and even spontaneity. The LP is sonically diverse and features Emily Utne as the band’s photographer, album cover designer, and occasional backing vocalist.

But Starflower is really a showcase for Edmonds’ gifts as a lead vocalist and multi-instrumentalist. Like Brian Jones, Paul McCartney, and Todd Rundgren, Edmonds can seemingly play any instrument you throw at him. This range as an instrumentalist contributes to his ability to write compelling and meaningful songs.

Please enjoy our interview with Edmonds.

SEM: Thanks for talking to me today, Jason. For starters, I’d like to congratulate you on Starflower, which I think is your strongest LP yet. But before we delve into it, let’s talk about how you got your start in psych music. What were some of the first psych bands that interested you – and why?

JE: Thank you! I’m glad you’re enjoying the record. I’ve always had a thing for 1960s British and West Coast psych. In the 90s there were some bands like Olivia Tremor Control that I liked because of their Beatlesque style. I loved Spiritualized, Spectrum, Galaxie 500, and Stereolab. I first heard the Dandy Warhols in 1997 and discovered The Brian Jonestown Massacre in 1998, but I didn’t label any of them as “psych.”

In 2005 I went to SXSW in Austin, TX, and I saw bands like The Gris Gris, Tomorrow’s Friend, Jennifer Gentle, Mike Wexler, VietNam, and Psychic Ills. I was intrigued because they were definitely not doing your typical boring indie rock. At that time my friends were really into bands like Bedhead, American Analog Set, and The Sea and Cake – all really good bands – but it was seriously putting me to sleep. So when I found these other bands, I was really excited.

The scene in Austin was beautiful, and the vibe was full of energy. Around that same time, I was reading Arthur Magazine a lot. I was into bands like The Espers and other folk acts like Six Organs of Admittance, Skygreen Leopards, and Tower Recordings.

I finally quit the indie rock band I was in. I had songs in my head all the time, so I started writing as much music as I could, recording it all on a four-track cassette recorder. 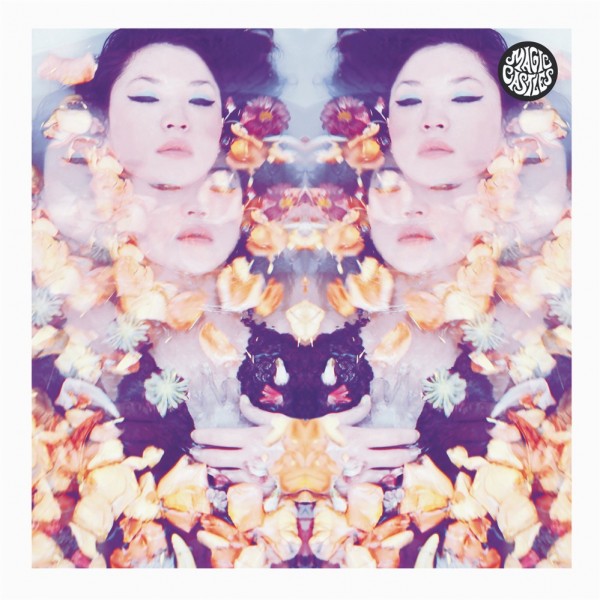 SEM: What was the first instrument you picked up?

JE: I taught myself how to play keyboards when I was maybe 19. I was in a “band” with my college roommates. Musically, we had no clue what we were doing. We were just really into Spacemen 3-Dreamweapon-era minimalism, and other drone-y shoegaze music. We would turn on these little spinning colored lights and play weird experimental music in our living room until really late at night.

I didn’t really start playing guitar until I was in my mid-20s. As soon as I started learning guitar, I fell in love with it and was obsessed with practicing.

SEM: What other instruments do you play?

JE: I can play piano and keyboards, guitars and bass, and drums. My mantra is, “If it has strings, I can play it.”

SEM: How would you describe the Minneapolis psych rock scene?

JE: There are great people here making cutting edge, weird, experimental music. Next level in the approach, utilizing open-ended free-form audio experiments. I played on an album like this by Night Court called Law & Order, with members of Food Pyramid and Daughters of the Sun, which was just released by Not Not Fun Records out of L.A.

There’s also another group called American Cream that have a similar open approach but with more of a Bitches Brew-spacey- jazz vibe. Very psychedelic. AC were just recording a new album at Pachyderm Studios (the studio where Nirvana recorded In Utero). I went down with Josh Richardson from the band Flavor Crystals and played Rhodes piano and Farfisa organ on a couple improv sessions.

There are other psych artists in Minneapolis too – like Robust Worlds and Leisure Birds. Beautiful and weird, not quite-right-in-the-head music.

The Blind Shake are another Minneapolis band that’s doing well. John Dwyer from Thee Oh Sees took The Blind Shake on tour and released their record on his imprint recently. 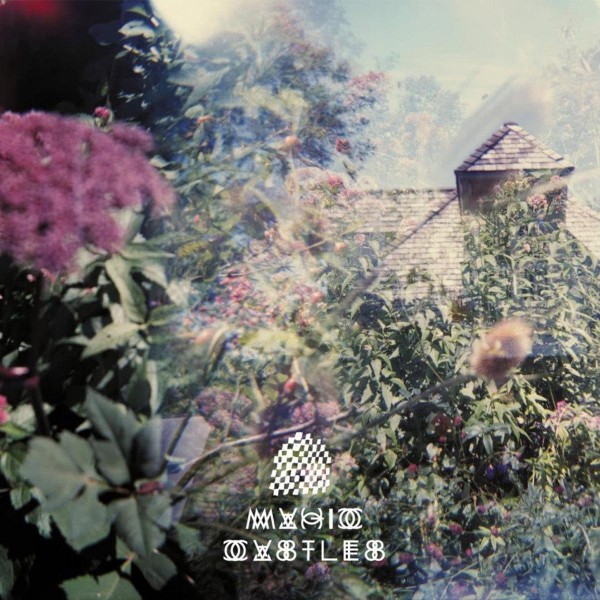 SEM: You released your LP – Magic Castles – in 2012. The record is a collection of your early material. Would you please elaborate on what this record includes? I’m wondering, in particular, about the timeline… How many years does the record cover, and does it have your first recorded material as Magic Castles?

SEM: The record and its follow-up – the excellent Sky Sounds of 2014 – came out on Anton Newcombe of The Brian Jonestown Massacre’s label, A Records. How did you meet Anton?

JE: One of Anton’s friends played “Ballad of the Golden Bird” for him, and he wanted that song to be on vinyl, so some time in 2010, he emailed me about releasing it. The Magic Castles LP was originally going to be released in 2011, but it got pushed back to 2012. I didn’t really meet him personally until we went on tour with them in 2012.

SEM: How did Magic Castles get invited to open for BJM?

JE: I picked two of my songs that I thought were the strongest. I didn’t know what the BJM side was going to be like; their songs ended up being “Goodbye (Butterfly)” and “Lions Ride Free.” 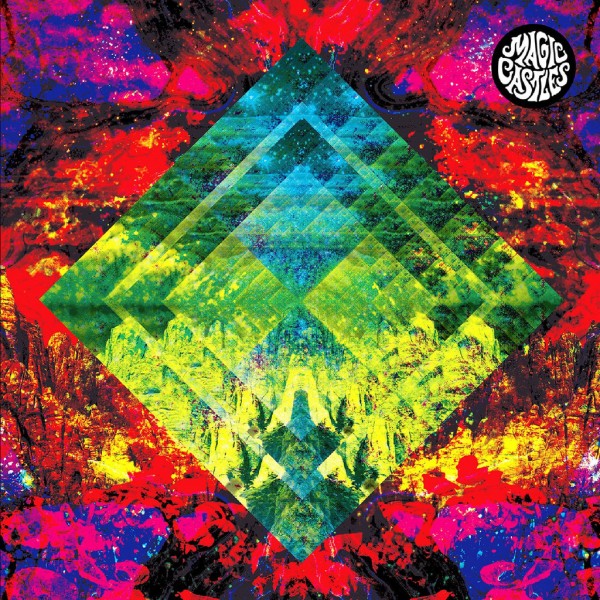 SEM: How would you describe Anton’s contribution to contemporary music?

JE:  Anton is giving back to the art/music world by releasing and distributing artists like Les Big Byrd, Tess Parks, and the rest of the A Records label roster. He didn’t have to do that, you know? But he does it because he genuinely wants to share the music he’s into. There’s not many people in the business that use their own personal success to give back like that.

That being said, I feel I have a responsibility as an artist to be the best I can be. I work at it and show up every day, and I play music every day. I want to take psych music into new dimensions that haven’t been explored as much by other artists. We’re all searching for new auditory experiences, and there’s no room for laziness, fixed mindsets, or ego trips. Anton understands all of that.

SEM: Let’s transition to Starflower. Would you please discuss the lineup that appears on the record? I’d like to get a sense of who plays what…

JE: Two band members moved out of state after Sky Sounds was released, so the recording process was different for this album. Scott Weller and Jeremiah Doering play drums and guitar on “The One,” “Hollow Moon,” “See Her Eyes in the Sky,” “She Wore Lilacs in Her Hair,” and “See You Shining.” I play everything else.

SEM: What’s the relationship between the evocative album cover and the music?

JE: The photography and album design were created by my girlfriend Emily Utne. She is a very inspiring and talented artist/ photographer. We collaborate on a lot of projects together. Most of the songs are about her.

SEM: One of the most thrilling aspects of Starflower is its sonic diversity. As far as I can tell, “The One” and “Moon Dust” use the acoustic guitar as bedrock. Did you write these tracks on acoustic? Any others on the album?

JE: Yes, good ear. I wrote almost every song on acoustic, except for “Samara” and “Lost in Space.”

SEM: “The One” is a terrific opener because it introduces many of the sounds that appear on the rest of the album. Would you discuss the instrumentation and arrangement of this track?

JE: Thanks! I recorded the drum track and guitar foundation with Scott at The Old Blackberry Way Studio. Then I recorded everything else you hear: bass, fuzz guitars, acoustic guitars, and Farfisa. Jeremiah laid down his guitar part, Emily added her vocals and tambourine, and it was basically done. Very simple, minimal arrangement.

SEM: By contrast, “See Her Eyes in the Sky” has a great, driving electric riff. How did you come up with the riff, and what kind of guitar did you use?

JE: I took the sessions home from The Old Blackberry Way Studio and was messing around doing overdubs on my own time. I just came up with that one night and recorded it. The guitar that I play is a 1966 Gibson ES330 Hollow Body.

SEM: Who is the wonderful female vocalist who joins you on the record?

SEM: I’m wondering if you could delve into the keyboards that appear on the album. What kinds of keyboards do you use? Maybe you could refer to some specific songs…

JE: I have a vintage Farfisa mini-compact organ that appears on most of the album. On the song “Samara,” you can hear the arpeggio and drum beat of a vintage Casio CT-701. The song “Lost in Space” features a Casio Tone Bank 100 – the little children’s keyboard – and the rhythm drum track and the organ sound are from an old Yamaha church organ that lives in my friend’s garage. It’s the same organ that appears on the song, “Songs of the Forest.” I also played a little MIDI keyboard module for an iPad to make the mellotron sounds on “Lilacs.”

SEM: “Lost in Space” and “Samara” have a cool, experimental electronic feel – very interesting for a “psych rock” album. What was their inspiration?

JE: “Lost in Space”, “Samara,” and “Moon Dust” are three songs on the album that I recorded at home. “Lost in Space” is a song from a scrapped Sonic Boom-inspired concept album of mine called Death Valley High. I’ve been waiting for a new Spectrum album for so long, I almost decided to make the album for him.

The song “Samara” happened very fast. I was in the studio recording a different song. It was very late at night, and I was messing around on the Casio and this melody just presented itself, so I quickly recorded it in about 30 minutes. It became “Samara.”

SEM: “She Wore Lilacs in Her Hair” truly indicates your strengths as a vocalist. Would you discuss the different vocal parts and how you arranged them?

JE: I’m not sure. I just hear the parts in my head, so I sing what I hear. Each song becomes its own little puzzle, and I keep revising everything until it seems right. Sometimes, I put a vocal take down, listen to it for a few days, and then decide the melody is all wrong and I revise and revise until it feels right.

SEM: The record also has some tracks with great grooves. We’ve already discussed “Lilacs.” Tell me about how you made the groove for “Hollow Moon.”

JE: Another song that I wrote on acoustic late at night, just messing around.

SEM: What’s next for Magic Castles? Is a tour in the works?

JE: We are touring Europe & UK in September, here are the dates:

SEM: Many thanks, Jason.

JE: Thank you so much!