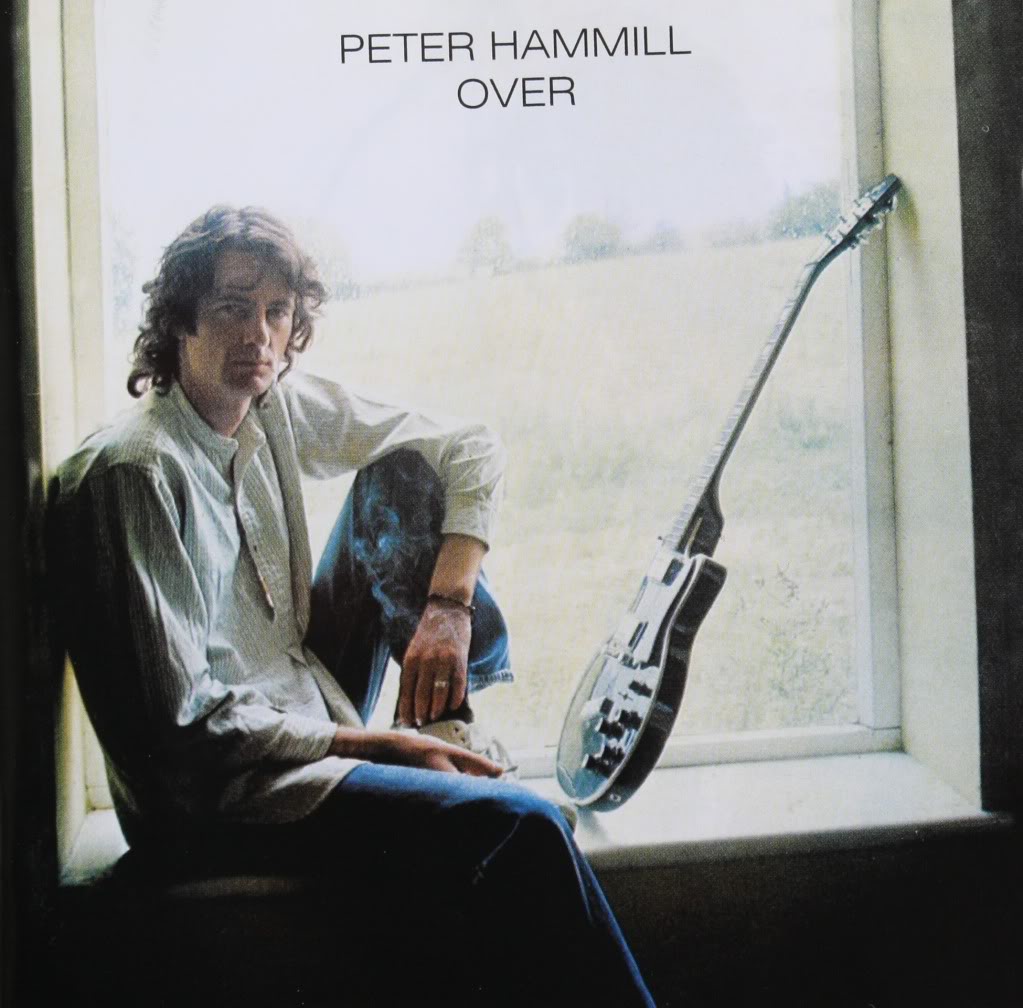 Some select few close friends of mine know the depths of musical worship-slash-adulation to which I’ve descended in terms of Peter Hammill. I’m 46 now, and I discovered his music – through the band Van der Graaf Generator and, very shortly after, his solo works — when I was 18, in the last month of my senior year in high school. (I had actually heard Hammill several years before, screaming his way through tunes on Robert Fripp’s Exposure album.)

My first Van der Graaf Generator album, bought at a Tower Records in NYC on a senior class field trip, was 1976’s Still Life, an album I couldn’t immediately get into but couldn’t exactly put away either. I felt like it wasn’t the album’s fault – I just wasn’t ready for whatever it had to reveal yet. A month later, on a trip into the central village of my small town and its lone record store called Heavy Metal, I found a brand new import bin. That’s where I discovered Over, released 40 years ago this week in 1977. There were several other Hammill LPs in there but for whatever reason I went for the one with the picture of the hip poet-type lounging in a windowsill with a guitar, and smoking a cigarette.

The storied premise of the album’s songs is true. There was a woman, Alice, with whom he had been deeply involved for a number of years and who left him for a Van der Graaf roadie. Yet the opening song, “Crying Wolf,” carrying on with the punk/hard rock intensity that the previous solo album, Nadir’s Big Chance, left off, showed no anger or ill-will toward the ex-lover or ex-friend. Instead, he turned on himself, and his propensity to overdo public displays of hurt and rage, to the point of alienating friends. Like most of the album, it contains an amazing bass/drum groove, courtesy of ex-Van der Graaf Generator band members Guy Evans (drums) and Nic Potter (bass), and Hammill, as in the title track of Nadir’s, delivers a brilliantly angry, distorted, feedback-filled guitar anti-solo that gets right at the heart of all sorts of anger.

The next track is a step back in terms of sheer energy, but the tension is not the least bit reduced. The song, “Autumn,” features Hammill on piano and the great Graham Smith (late of the short-lived, last ditch Van der Graaf effort), on violin. “Autumn” concerns itself with the bittersweet feelings shared by parents when their children leave the nest. As heart-rending as this song is, it puts paid to the common conception of the entire album being a break-up record. Hammill had no kids, and the song, in fact, was performed live as early as 1973.
“Time Heals,” coming next, is the longest and the most prog-like song on an album full of simple, minimal melodies. It moves through several phases before returning to the brooding whisper of the introduction as a coda, bookending the song with “I wish, I mean, I meant” sentiments. Everything in between, however, is a fast-paced run through Hammill’s realization that he and Alice are growing apart and that he’s losing her, to the point where he’s lost her and is trying to navigate a social situation wherein he has to coexist with her and his friend. “Oh, time heals,” sings Hammill, sardonically and sarcastically at the climax, followed by a from-the-gut response to that ready cliché, “Oh, but I still bear the weals…”. That wouldn’t be the last time Hammill would lyrically examine the phenomenon of the surface of a wound healing while the memory of the pain lies below the scar tissue.

“Alice (Letting Go)” closes side one and is far and away the simplest song Hammill has ever written. One riff, played over and over accompanying what almost amounts to a talking blues. He’s persevering: how many ways can he say, in five and a half minutes, how he can’t live without Alice? Well, he’s damn sure going to find out.

Side two opens with the orchestrated “This Side of the Looking-Glass,” another paean to Alice, a love song this time, free of any recrimination in any direction. Just pure loss and longing, unadulterated by jealousy or other nasty emotions. Next comes “(On Tuesdays She Used to Do) Yoga,” which shows that, even in his grief, Hammill can’t stay away from studio experimentation, and there are a lot of looped guitar effects on this one (solo, no other instruments). Here, we have a little bit of the “Crying Wolf” persona, kicking himself that he didn’t pay more attention to the needs of his partner when he could have. He describes her as an artist which his own artistic pride wouldn’t allow him to recognize as such. He would do anything, even yoga in the freezing cold, to undo the damage, but knows it’s too late.
The album’s penultimate track, “Betrayed,” is truly harrowing, and even more so in the live BBC version that appears on the 2006 reissue. “Autumn” featured Graham Smith on violin and Hammill on piano; this features Smith with Hammill on guitar. Very stark, turkey vultures circling in the calm grey sky, music. Starting out somewhat gently, Hammill soon spins into a vitriolic frenzy, cursing and damning everyone and everything – “…it’s all been absolutely worthless, / all of the efforts I’ve made, / to be gentle and kind / are repaid by contempt, / degraded with sympathy and worthless kindness / and love that isn’t meant…” He ends the song, screaming but spent, repeating “take it away, take it away,” to the hammering of the acoustic guitar and the maelstrom of the violin. The listener is spent too.

So, where does one go from here? Some kind of reconciliation or redemption is demanded. And Hammill delivers here, in the final track, “Lost and Found.” Where he beat himself up in the opening track, here he gives himself the gift of clarity; what’s needed to be done, mentally, to move forward. And acknowledging that the girl’s gone, and that he’s going to be “holding the door” for her and her new partner to walk through. The song, and thus the album, end on an ambivalent, ambiguous, and frankly rather confounding note. It sounds like he’s suddenly found love again at the very moment he’s finally free of all the previous pain. It seems too easy, and yet Hammill seems to be aware of that too, noting that rings have a dual nature: they bind us, but they also come around to their beginning, endlessly. And so, while the last section of the song carries a jaunty, upbeat tempo, what still lingers in the listener’s head is the middle section of this song which, with the magic of reverb, transports the sonic location to a place out of time and space – a lovers’ bedroom, where the singer sees his partner in the morning already risen, and has the epiphany that, though a sense of paradise might have been achieved for him, it’s over – he’s already out of her life, and cast “out into the cold grey daylight / never even wondering, of course,/ if one moment of perfect passion / is worth a lifetime of remorse.” This is brutal stuff, and will most likely stay with the listener far longer than the song of redemption which surrounds it. Hammill’s parting gift – and it’s over.