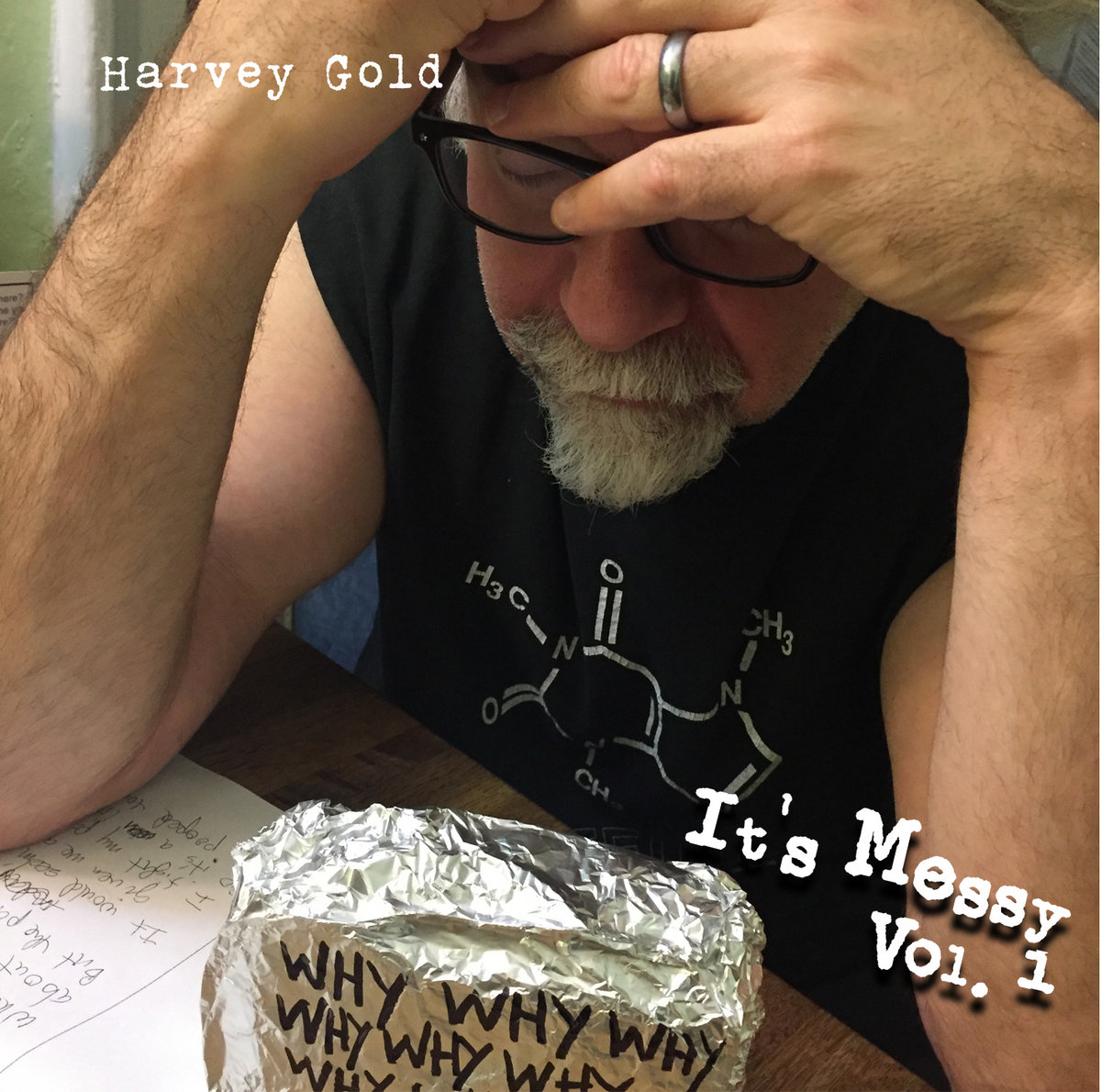 Though it stretches credulity a titch considering his skewed-but-illustrious history and the kind of sideways lasting legacy that has been and continues to be built (we’ll just Wiki all that right here for your convenience), but if you need introduction to the varied wonders of Harvey Gold, wonders grounded in an emotional honesty while gilded perforce in the Akronesque witticisms and zapped sensibilities that birthed not only the Gold-founded Tin Huey that included among their number Chris Butler later of The Waitresses and Ralph Carney later of just about everything, but their jittery brethren Devo and a host of others as well (Rubber City Rebels, anyone?), allow us to direct you with due haste to track 7 from his latest, the quasi-compilation It’s Messy Vol.1 which, as luck would have it, is also the album’s first video (though unavailable in the US so we’ll settle for the generic print):

While the majority of Harv’s material over  the years hasn’t tended to lean toward the searing personal as “Lazy Boy” does, the song nonetheless helps illustrate how, as with his cohort (in structure and tone “Lazy Boy” suggests a core lineage with Butler’s recent solo work on Easy Life and the like), there is, running not just alongside that renowned streak of advanced whimsy but actually underpinning it, a palpable – and not a little fearless – spark of the intimate and vulnerable at work. It makes for a complex pop engine that has long been a source of deeply satisfied delight and Messy is no exception.

A catch-all collection that culls together solo tracks in amid those from ad hoc combos Harvey in the Hall (with cameos from Dan Auerbach and bleedin’ Chris Hillman!), the Butler/Gold-led Half Cleveland (both of which include NEOhio HOF drummer Bob Ethington) and the inscrutable Mr. Ray Violet led by Huey alumnus Michael Aylward, the album roams with a deftly varied acuity.

From cunningly cutting love-gone-wrong Half Cleveland rocker “Your Side of the Room” with its Midwest build of guitar dynamics that opens proceedings to the amusing solo piano joint “Song For Joanne” that finishes them with a mention of Medicare and the rhyming of ‘ballad’ with ‘egg salad’ whilc exuding, concisely, Gold’s trademark balance of pathos slash humor, It’s Messy Vol. 1 covers bases in a 3-D chess game kind of fashion.

“Allegheny Lode,” from Harvey in the Hall abetted by Auerback on bottleneck and Hillman on mandolin is a post-Civil War stomper the story and style of which could have slotted comfortably on to just about any of the latter’s projects, the one Mr. Ray Violet track, “Lemon Beazly,” is part avant-pop americana, part fall-apart prog that sprawls and charms in equal measure, “In Consideration of Joe Strummer” (HC), kicks up in romp and lamentation the Bo Diddley vibe while artfully – and movingly – linking Butler’s Kent State-shaped psyche to the “continuing education” offered via a one-time conversation with the song’s dedicatee, the cover of “I’ve Just Seen A Face,” stripped to its mournful core – just voice drum and piano – is an understandable highlight, though the effecting, layered rouse of the next-up “In A Very Good Place (HitH) – sharp and expansive, lighters-aloft and pleading – could make a strong case for same.

But pfft, what are we doing talking highlights when it’s a Harvey Gold (and pals) album sitting here in our collective laps and so, by definition, it’s of course full of ’em, packed in there solid like hummable sardines. So much so, in fact, we’ve just now wrapped up this review without even mentioning that that late, great and aforementioned polymorphous polymath Ralph Carney provides the entire horn orchestra that carries “The Fence” to its sorrowful-but-somehow-triumphant close. So there ya have it, the capper, perhaps, to a many-cappered album. [get it here on Smog Veil hard or digital]