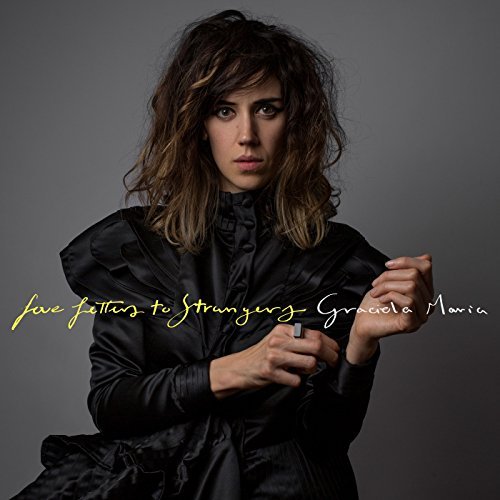 She co-produced her third album with Lars Kirchbach and one song, “Bring You Home”, was co-written with Lukasz Polowczyk.

Maria melds acoustic elements into an ambient and pop mix that is graced by her smooth, but pensive vocals. The overarching theme of Love Letters To Strangers is the tension between the desire to connect with others and the pervasive alienation found living in big cities.

Maria is not only a singer and lyricist, but also plays piano and guitar, dances, and occasionally acts in plays and models. She’s known musically for her solo work and collaborations with Robot Koch, Long Arm, and Smpl Thngs.

Stereo Embers Magazine: Hello Graciela! Can you please tell us about yourself?

Graciela Maria: Hello! I’m a warrior and music was always the thing that saved me. I started singing at a very early age. I was born in Mexico, almost by the border to the States, but I’ve been moving around ever since. I guess I’m always searching for a new path. Same goes for singing.

SEM: You’re music is very haunting, very brooding, very subaquatic in tone and feeling – Is this atmosphere the natural result of your songwriting and recording process or did you go into the studio with a specific intentions?

Graciela Maria: I chose a path, but it turned into that destiny. I grew up by the sea. I guess the power of the ocean, its darkness and its mysteries, are always with me.

SEM: On Love Letters To Strangers, it seems the main theme is loneliness itself and the struggle to make love work in these disconnected times. Do you feel that love is not possible in this modern age?

Graciela Maria: It is possible. Love is everything. Love is light, but it’s also darkness. Love is soft, but it’s also a struggle. Like when we come into this world, when we are born, that moment it’s so violent, but in a beautiful way.

Love evolves. This album is dedicated to some strangers that really touched my life and changed me and made me confront the beast. I don’t think that love is not possible in this age, but I think that my generation, and definitely for those living in big cities, it’s sometimes hard to show what they really are and what’s really under all the layers created as protection. In my video for the song “Arab Prince”, Miren and I tried to capture this: the longing to share, to discover the other, to remove these protective layers.  But even when we desire, we still stay sterile, and removed, through superficiality.  Everything is happening so fast, we have so many options, and it’s really hard to commit.

SEM: From the credits it looks like you co-produced this whole record – Was this the first time you did so? How does it feel to take control of this aspect of the album-making process?

Graciela Maria: I produced this album with my good friend and sound engineer Lars Kirchbach. It was not the first time that I worked like this. I also co- produced my last albums, with Robot Koch and Sneaky consecutively. So I never felt that I was not in control. It was always a true collaboration. I always wrote my songs. The production / mixing is just something that accompanies the story itself and helps it to unfold fully. When I start writing a song, it comes to me as a complete thing: melody and words together. The creative process that made Love Letters To Strangers was very different from how I worked on other albums and it really feels like this album is more of who I am, or at least more of who I am right now.

SEM: Are there any stories about how this record was made, maybe regarding particular sessions, that you would like to share?

Graciela Maria: I had a very magical time in St. Petersburg. I went there to work with Long Arm and Ruslan Gadzimurahdov. We made two tracks there together. To be in the studio with them was one of the happiest and inspiring experiences of my entire life! Working with these two beautiful, talented monsters reminded me of why I chose this particular path, why I make music. Between the recording sessions, I would get lost on the streets of St. Petersburg, collecting ideas. One night Georgy (Long Arm) took me to the top of Saint Isaac’s cathedral. It was just majestic to see the whole city from up above. Also, to get up there was kind of tricky. At some point we had to walk up a very shaky, tiny ladder suspended up in the air. I felt like an equilibrist. Sharing silence with him was beautiful; we brought some of that energy back to the studio. The sessions were very freeform, although I brought some ideas for songs with me. When we worked, I felt pure happiness permeating the room. Being a musician can be hard sometimes. You struggle a lot, but these types of moments, when you get to leave your body via music – they make it all worth it.

SEM: What’s next for you?

Graciela Maria: I have different projects going on and they’re very different from one another. It’s very interesting.  Silent People is very experimental and then Smpl Thngs is all about improvisation. And then I have my traditional music project. They all keep me inspired and open the doors to collaborate with other musicians and take me out of my comfort zone. And because of this, I never stop learning.

Find out more about Graciela Maria