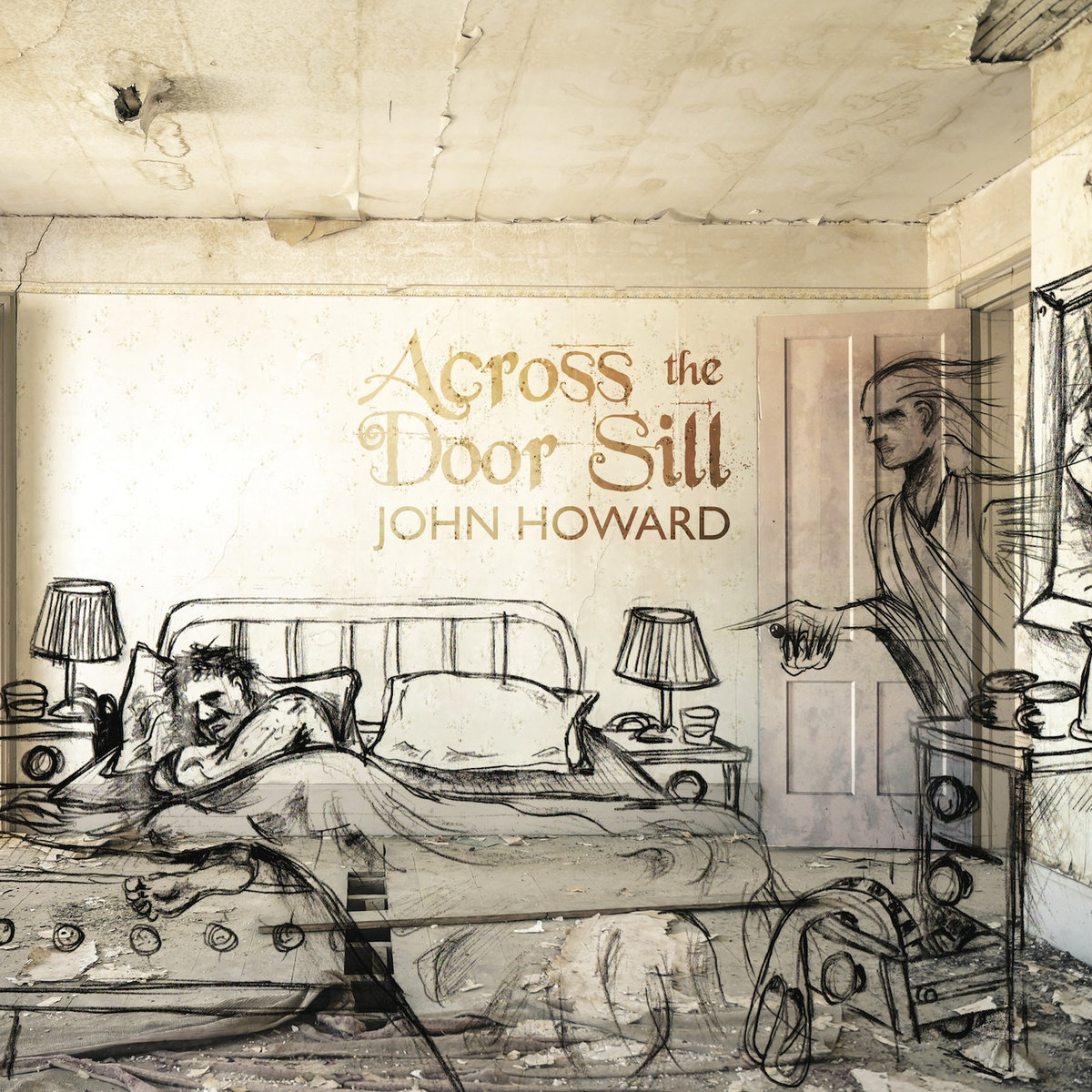 It is not always, or perhaps ever, our job as writers to go beyond the circumstances and triggering events that motivated a songwriter’s particular piece of work and determine instead their actual state of mind while conjuring the songs pouring through our headphones with, in this case, the grace of human frailty and yearning. Most times, which is to say the vast majority of times, it’s enough to report on the results, the degree to which the efforts to move us have indeed succeeded in their aim and how. Or why. Or why not if they haven’t. But dammit, on some rare occasions – and we have one here in John Howard’s Across the Door Sill, his third since returning to making music in 2005 (catch up on his back story here) and his first for Occultation, home of the sublime – there’s no real choice but to plumb the presumptive depths and make an attempt to place ourselves, via some odd avenue of voyeuristic transference, into the spiritual space occupied by the artist as the songs were rescued from the amorphous and took their mortal shape. Listening to this album the many times through – its five tracks, extending to almost forty minutes, continue to beckon, other obligations be damned – an imperative develops to glean the spark’s essence, to basically walk in to these songs just at that point they emerged into existence. Not a small ask, admittedly, but fortunately there’s a blueprint of sorts, drawn from a source somewhat unusual and therefore surprising in the so-called rock/pop idiom but, upon reflection, seeing as this record hardly fits into that mold anyway, not.

Mevlâna Jalâluddên Rumi, was, of course, the Sunni Muslim poet and Sufi mystic from the 13th c. most often simply referred to by his last name and whose work, arguably more than anyone’s, is the very embodiment of the word ‘timeless.’ The prismatic refracting of dualities, of the competing impulses sounding from inside the heart’s separate chambers, into humbly-faceted gems of quiet, solid-yet-extraordinary insight, was the man’s immortal gift, one that resounds down through the centuries without losing a single glint of radiance. Put more plainly, his poetry amounts to something of the ultimate user’s guide to hope and love and potential and all the other messy et ceteras of this often confounding human experience. As if sketching out the very structures of our emotional DNA and thereby detailing the ways our everyday behavior, whether in defiance or submission, reflects or is forced to accept the edicts of desire, Rumi’s works as often as not read like stretched koans, a term applicable as well to the tracks on Across the Door Sill, a song cycle itself styled after the Sufi writer’s elegant output.

Specifically, Howard has based this work, with an intuited looseness of precision, around Rumi’s “Quatrains,” a piece that speaks to the gauzy borderland between our conscious and unconscious, between the living and passed – interpretation, as usual with Rumi, is beautifully fluid – and that’s printed on the album’s inside sleeve. Because of its critical relevance, I’m taking the unusual step of reprinting it in full here before moving on:

For Years, copying other people,

I tried to know myself.

From within, I couldn’t decide what to do.

Unable to see, I heard my name being called.

Then I walked outside.

The breeze at dawn has secrets to tell you.

You must ask for what you really want.

People are going back and forth across the doorsill

where the two worlds touch.

The door is round and open.

Opener “Who Cares” rather basks in the autumnal, lingeringly eternal, rainy Central Park vibe as often hung almost visibly in the background of a Laura Nyro record (both Nyro and Roy Harper are cited as among Howard’s lodestar heroes), and though its sparseness, keen and with a sly edge, might suggest in places the ascetic tendencies of Robert Wyatt’s later work – “Shipbuilding” may come to mind – the immediate differences arise with dramatic flourish: lush layerings of piano (the only instrument beyond Howard’s lucent tenor), vocals carefully sculpted into something of a tensile depth – not least when doubled up in harmonies that are absent tonal variance – and sliced up slice-of-life lyrics that weave together the dryly observational with the wryly lacerating, their political intent when it comes folded like oblique, dagger-filled serigraphs into the fabric as a whole (“cheerless leaders gamely shaking out a move/making out they’re flying somewhere mammoth…getting colder by the way they smile at rich men“). The result is a sort of astringent intoxication that rolls unbowed across 9 minutes 43 seconds, during which time the constant wave of bewitchment never falters. It’s an anti-formula formula you best become accustomed to as it plays out by means of steadiness and stealth throughout the record.

“Outward,” with its slightly creeping bent, has a more shadowed aspect, the stark expressionism of Howard’s lyrics – here journaling a road trip where the cloud of memory is forever pressing in through the windscreen present – resounding over a softly strident piano silence. What’s perhaps most notable here is the voice, far more emphatic, its clarion immediacy matching the words’ at times unsparing unforgiveness of self and not exactly backing off when hints of a balancing mercy appear to leaven the ruthless wandering of thought. Call it a long dark night of reflective eloquence, call it a lengthy postcard from the edge composed by Randy Newman after years of deeply Cohenesque therapy, it’s both unsettling and wholly life-affirming while that old canard that says it’s the journey not the destination rises up like a murky beacon of hard-fought joy, which of course is the only type we have.

Introducing “Preservation” with a bit of light, existentially bracing poetry (like you do) – “So how much are we/blistering through space/charmed by dying suns//which keep us in our place/alone amidst an ocean of moving memorabilia” – the singer, out front a not uncheery sparkle of piano figures redounding like warmth against the sometimes cold slap of reality, meticulously dissects, as best one can, the enigmas of this ever-shifting dance we’re all caught in. Buoyed mid-song by a trebling of inline harmonies, Howard dipping into a rich plummy baritone just prior to layering in a near-falsetto choir of backing vox ooh-oohing the melody line like a trio of angels recruited from the pub down the road, the track may be Door Sill‘s deepest dive into an experience-burnished fatalism, quite a feat considering its competition but in any case the iniquities of fate are dealt out with such sleight-of-hand assurance as to almost soothe, another trait inherent to John Howard 2016. 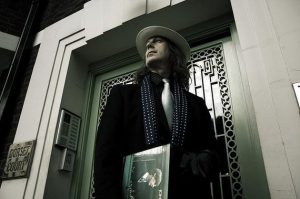 While inescapably a qualified statement given the prevailing tone, “Pigs ‘n’ Pies,” true to its title, is the album’s most playful go, though again, as it reminds in its inimitable fashion of the Zombies circa Odessey & Oracle – sharing, to these ears, a sense of cracked teatime longing with the likes of “Care of Cell 44” – we’re not exactly talking lollies and a breezy appearance on Top of the Pops. Instead, with its thrice-repeated structureless structure, its decades-spanning lyrics cleverly linked by the slyest of joins while the usual multiplied pianos wring pathos from the length of the ivories, this is a sort of soaring melancholy served warm, tongue-in-cheek-by-jowl with an always compromised nostalgia and a hearty helping of broad-stroked empathy, Howard ever merciful in his appraisal of human folly. Were it somehow unclear to this point, it is be here that it will become obvious that, for this artist on this record, the personal is the political is the emotional is the personal and so the circle gets squared as has thus ever been, a construct brought conclusively home on final track “Stretching Out.”

Richer in its Rumi-inspired reach as anything that’s come before, “Stretching Out,” the instrumentation in a state of constant lotus-like unfurling – think Elton John channeling Stravinsky, both of them in the throes of an ecstatic meditative trance – is simply exhilarating as it accumulates upon itself, the profound tumbling humbly forward with the sublime. Though ‘only’ a song, it is, because I don’t know how else to describe it, a type of teeming satori of exquisite contradictions. There is to “Stretching Out” a modesty of accomplishment immodest in its scope. Expansively intimate, it encompasses multitudes by means of effuse reduction, its nine minutes passing in a flash, a microcosmic sensation this 60-year-old knows only too well, time distilled to nothing in its endlessness. By its language the quotidian is made grand, blushing a little in the process but proud to be recognized as the poignant and necessary player that it is. And oh my the lines that fall from the skies here: “lives in awe of lives screaming with abandon,” “bewitched by empty condiments, returning them with grace,” “wipe your hands for fear of dampness showing, knowing they’re knowing,” all arriving boxed inside contexts that drift like everyday manna through the languid furthering sphere of this piece. I write right now with a feverish understanding of “Stretching Out”‘s measured perspective, I know it by heart as any of us do and how much a miracle must any one song, any one record – hell, any one anything – be to capture that in all its fleetingness. None of which is even to mention the unforeseen production flourishes crucial to the track’s impact, the great exhaling sigh of breath that catches your own after the phrase “heat haze” barely past a minute in; the brief but startling burst of Brian Wilsonisms some five minutes later that’s like a dream Jeff Lynne wishes he could have; the massing of voices at choice moments of textural emphasis. Self-produced, those and a thousand other decisions across the whole of Across the Door Sill help it accrue to the status of masterpiece. It’s evident everywhere that this was a labor of intense, even obsessive love for Howard, and the fact that to us, as listeners, the twelve months it took to make the album actually seems an astonishingly brief period to finish something of such devotional complexity, should serve as proof that he’s succeeded.

So, if it’s universality you seek, a piece of recorded work that speaks without stint to the plain complex fact of human existence, I don’t believe it’s an exaggeration to say you won’t find any more exacting. Succinct in its emotionally panoramic focus, what we have ultimately in Across the Door Sill is a baroque suite of death-defying balancing acts. That is also manages, through its honesty and artistry and guileful lack of guile, to be among the most exciting records in memory is a feat of the most quietly extraordinary kind. We don’t like to throw the term ‘important album’ around the virtual offices of SEM here very often but if we did there could hardly be a stronger candidate than this album, nor one that could so readily withstand the scrutinies such a declaration would incur. It is, truly, beguilingly masterful in a way you’ve never heard before. Seek it out.

[Across the Door Sill available from Occultation here]