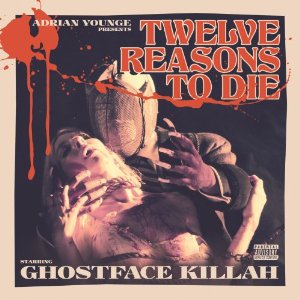 Wu-Tang Clan’s Ghostface Killah has always loved his comic books, especially Iron Man. Of course, his most famous alter egos are Tony Stark (or “Tony Starks,” as Ghost puts it) and his alter ego, Iron Man. Not only did Ghost title his first solo album Ironman, but he made an appearance in the 2008 film version of Iron Man via a the video for “We Celebrate,” which plays on a giant TV screen as Robert Downey, Jr. and Terrence Howard booze it up mid-flight.  2004’s The Pretty Toney Album explored the Starks side of his personality so much, it was probably an album that Downey Jr. had on repeat as he prepared for the role.

But Ghost’s new album Twelve Reasons to Die is his most ambitious comic book-related project yet.

A hip-hop concept album based on a comic book series of the same name, Twelve Reasons features guest spots by so many members of the Wu-Tang Clan (Inspectah Deck, Masta Killa, U-God, Cappadonna, and RZA himself as executive producer and narrator), that Twelve Reasons is almost a Ghost-led Wu record.

Written by Matthew Rosenberg and Patrick Kindlon, drawn by some of the finest artists in comics, and published by RZA’s own Soul Temple imprint, the comic book Twelve Reasons to Die is set to consist of six issues, with the first coming out in late May. It tells the gory tale of one man’s attempt to hunt down the twelve most dangerous men in the world. This is the stuff of Tarantino – and, of course, Ghost.

The conceit of the first issue – and of Ghost’s record – exemplifies the creativity that we’ve come to expect from anything Wu-Tang related for the past twenty or so years. Tony Starks works for the DeLuca family, who has him killed for leaving their employment and falling in love with their daughter.  But Starks’ remains end up in twelve LPs that when played, resurrect him as Ghostface Killah, a man who returns to life to avenge his own murder.

As with almost everything Wu-related, there’s a brilliant twist to what could be a simplistic narrative – Ghost’s revenge takes place in the form of hip-hop lyrics.

The opening track “Beware of the Stare” features soul singers, who warn the listener to “Beware of the stare of the Ghostface Killah.” Ghost’s opening salvo – “So I’ve got the stare of Medusa / With the rope tied around your neck / It won’t get looser” – shows his cool way of handling a metaphor through classical allusions. It also sets up the narrative and creates the protagonist as a force to be reckoned with.

The use of soul singers isn’t arbitrary. Adrian Younge’s production is immediately recognizable as a blend of soul music and Ennio Morricone – the legendary composer of the soundtracks for many of Sergio Leone’s most violent westerns, including the classic Dollars Trilogy, starring Clint Eastwood in a role very similar to Ghost’s protagonist on Twelve Reasons.

Younge’s music serves as the perfect vehicle for Ghost’s narrative. Indeed, ever since “Shakey Dog” from the classic 2006 LP FishScale and probably even before that, Ghost has been one of the premiere storytellers in hip hop – and Twelve Reasons’ tracks like “Rise of the Ghostface Killah,” “Murder Spree” (which is the most Wu-infested track here, featuring U-God, Masta Killa, and Inpectah Deck), and “Sure Shot (Parts 1 & 2)” show the master at work.

On “Rise” we learn about the resurrection of Starks as the Ghostface Killah, with Ghost adding power to this already gripping story: “They killed mighty Starks / But the light shines within” and “Black superhero, crime boss, arch nemesis / Good versus evil since the first book of Genesis.” In just a few lines, Ghost covers spirituality (the immortality of the soul) and mythologizes his character in both modern day (superhero) and biblical terms – not to mention the fact that the lines expressly indict the DeLucas for racial injustice.

Coming after “Revenge Is Sweet,” a track whose title itself explains its role in the narrative, “Murder Spree” makes pulp poetry out of bodily dismemberment and, as Ghost and friends put it, “There’s a dozen ways to die / Six million ways to do it.” Bret Easton Ellis, Tarantino, and Slayer should all take notice of lines like,  “Torture, chop your legs off, thrown off the boat; / Guillotine a nigga, one chop to the throat; / Suffocation, saran wrap in your face; / Buried alive, throw a few nails in the case.”

Backed by one of the funkiest beats on the record, Ghost brings the narrative to a head on “Sure Shot.” The words of the song become the elements of vengeance: “I strike back hard with a vengeance, / Attack through these killer words I spit in a sentence.”

RZA sums up the import of these lyrics on the final titular track: “Ghostface became immortalized in death, creating a mayhem so vast that the tale of his rampage will be passed down for generations. Gangstas told their children never to double-cross a man whose will was so strong that he could cross the plains of existence to get his revenge.” The emphasis here is on the word “tale.” The violence to which Ghost’s words allude is a metaphor for the power of the spirit – in all its strength – to survive death in storytelling.