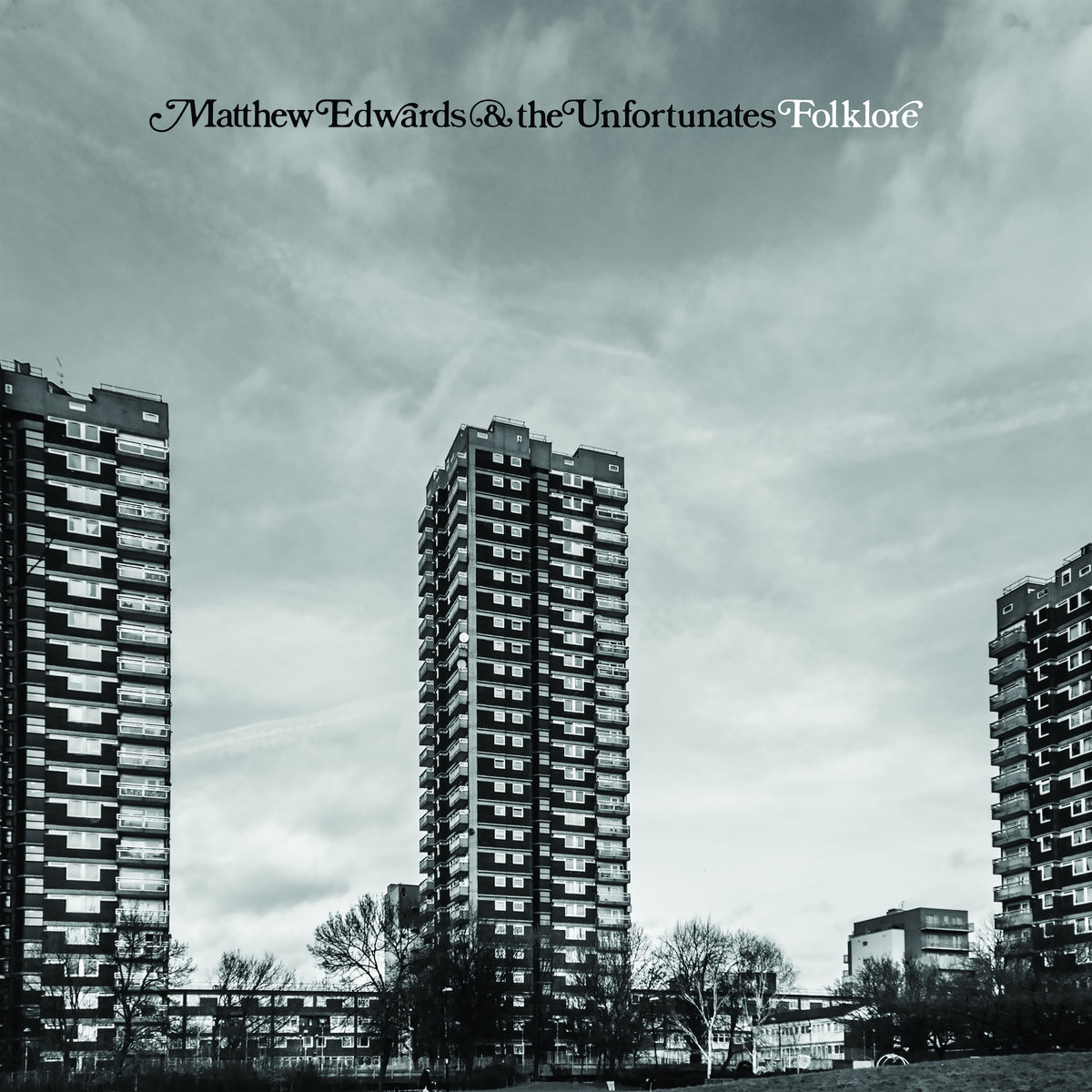 Every rare once in a while there’s an artist whose work has such a deep and immediate intuitive impact, strikes so viscerally it doesn’t so much penetrate one’s consciousness as soak in through every pore, that the drive as a writer to get to the utter essence of their artistry is a matter of near-obsessive need, not simply to compel whoever might read whatever words result to seek out the work themselves but also as a means to better understand my own core aesthetic, a lifelong process forever being honed. As confirmed when covering The Fates, his debut album with the Unfortunates after years fronting cult favorites The Music Lovers, Matthew Edwards is decidedly one of those artists. And, while I’ll surely fall shy of that target here as I did then – it’s a bloody vain pursuit in the first place, of course – I’ve no choice but to try. Folklore, like its predecessor, has that same damned siren’s pull.

Too arch to be wistful, too smart to be mordant, the man instead opts for a sometimes astringent, wry narrative honesty that places him on an ageless Wilde-Coward-Davies (and dare I say -Morrissey) continuum, his observer’s squint narrowed keenly as the mundane saga of human life – his own, primarily – reveals itself time and again as a hopelessly tangled tragi-comedy of manners, or errors, of the type emotional yearnings that undo us all while also binding us together in a swirl of empathy. In lyric and arrangement, in instrumentation by turns lush and sprightly, but most pointedly in the stately-but-warm inflections of Edwards’ voice, the lingering lilt of a somewhat recalcitrant Britishness presides, twinges of regret, fatalism’s sighs briefly fogging the windowpanes. In many respects it has the feel of a Victorian sensibility strained through the fine-mesh filter of an almost-modernism, ‘almost’ because the world Edwards’ words inhabit throughout Folklore and pretty much the whole of the guy’s catalog is distinctly pre-internet, when a happened-upon sweep of a misted-over moor, say, would more likely occasion a moment of post-Romantic reflection than an Instagram post (no surprise then the line from the swooningly melancholic “Ungainly” “Now I’m standing on the peripheries of the 21st century.”). In other words – and as any poet should naturally be – Edwards is of his time in a timeless way, drawing on a sort of bereaved intelligence in a way that’s not only optimally suitable for this era of alternative facts but also acts – no doubt unintentionally – as a quiet anchor. You can be fairly guaranteed that there will be no normalizing of the plainly absurd here, though indeed there certainly will be a recognition, and even celebration, of the often plain absurdity of human behavior, addressed with an unmatched tone of sanguine authority. None of which is to even mention the luminous pop élan with which these tracks are built, switching from pith to pity with a blithe acuity, the players responsible, this cast of blessed Unfortunates (core members Derick Simmonds drums and vox, bassist Bobby Cotterill, David Roberton on a phalanx of keys, with Isaac Bonnell on guitar, Eric Drew Feldman bringing more keys, and Adaiha McAdams-Somer back on cello and harmonies) the apex of ensembled grace and nuance.

Opener “Birmingham,” a paean not so much to place as to an errant son’s memory-soaked moment in that place, is awash in that peculiar returnee’s yearningness anyone long-absent feels as the faded Polaroids rise up again through the windscreen. Its tempo a punchy type of austere, a recorder sounding out its lonely plaint against a steady acoustic strum and a stalking pulse of a bassline, emotions toss and overlap in waves as Edwards’ catches details and forges them into fleeting ephiphanies, all set like amber in a glowing maudlin majesty. It is, in a song, the gist and marrow of this artist’s particular gift. As careful – and effective – a crafter of lyric as Leonard Cohen, with an ear for sumptuous melody to match, Edwards also knows how to bend a hook just enough to catch you with your guard down, in this instance the twice-repeated refrain “I got in to your brothers car and he / drove me to the hospital” landing with enough tacit heft to spawn entire movies in your imagination. As described one might presume it Folklore‘s standout track which would be exactly right were it not for all the others.

“Lazy” fetches up on a thin wraith of what seems an off-key Farfisa run wandering lost from a Pebbles compilation and proceeds to directly-in-an-oblique way quote Devo as in “I saw my baby getting lazy” (later “…reckless,” later still “…tongue-tied.”) on the heels of which the utterly delightful line “she feigns insouciance, but nonetheless” and damn it, how does one resist a songwriter with such a lively facility for language – this is literary lippiness at its finest – especially when it’s folded inside such a Fall-like, agit-artpop construct as “Lazy” most unlazily offers? Following, set inside the lurking snakecharmer haze of a cello drone and a burnished acoustic gloom augmented by a single synth horn with autumn fever, the title track confronts the ache of a conflicted nostalgia, Edwards, gently unflinching, facing off against the mythos in which his Englishness is steeped (“I’ve got the songs but you’ve got the folklore”). It also presents another illustration of this songwriter’s knack for inserting close-to-non-sequitur asides – in this case “kiss to ‘Warm Leatherette” and “kissing to X-Ray Spex” – that speak contextual volumes, as sneakily  insightful as diary entries.

“When We Arrived at the Mountain,” one of two tracks here that sees the return from The Fates of Fred Frith (the other the penultimate “Song of Songs,” an impossibly lush near-spiritual/near-love song whereupon the guitarist is allowed free stratospheric range of which he happily takes full ecstatic advantage), is a nimbly lurching, mid-tempo trawl featuring thereminic cello, parched spidery washes of Frith’s reverbed guitar, and some disembodied vocals courtesy Dagmar Krause among (oh so) much else. It’s also likely Folklore‘s most metaphysical cut, Edwards engaged in a search for surer footing in the world beyond the self that’s always hovering on the horizon like a heat mirage (“I am done disbelieving / I’m done because I tried too hard sometimes”). Unsurprisingly, this being the Bard of the Undermine we’re dealing with here, it’s a quest that will soon be openly controverted as a few skips down the tracklist the relaxed, tumbling jaunt and jangle of “I Can Move the Moon” has the singer, straight out the gate, professing “I lost touch with my spiritual side / to be blunt, I had no spiritual side,” a winking contradiction that in rich concise fashion captures the biting self-reflexive irony that seems to have been baked in to Matthew Edwards since birth, though if further proof is needed consult the next line “thought I saw the face of Jesus once but I’d over-imbibed.”

Though bringing back Frith and inviting Dagmar Krause – it’s her dusky harmonies on late-afternoon ballad “Willow Girl” responding like a twin sister to the lowing cello that help float that song’s madrigal weight with a feather’s touch – lend Folklore a kind of left-field star power, it’s the assembled Unfortunate core that merits one’s most full-throated props. With Simmonds’ uber-intuitive, jazz-empathic work behind the kit (Edwards speaks of him in Liebezeitian terms and will find no argument here), Cotterill plying basslines that wend a path between John Wetton and Arash Torabi, Roberton and Feldman’s concise, agile fills and sure-handed foundations building sympathetic 3-D atmospheres (check the shimmering ache of “Home” or the ghostly shifting synth that “…Mountain” emerges from), and Bonnell’s journeyman’s heroics on guitar, you have arguably as good a supporting cast as could possibly be found to bring this artist’s intimately baroque pop visions to market. Self-produced, it’s hard to overemphasize the beauty of Folklore‘s sound, there’s a boldness to it but one constructed of the profoundest subtleties, nowhere more evident than on the album’s farewell track, even as, somewhat perversely, it’s the rowdiest of the bunch.

With the Unfortunates galloping along in a compact fury, encasing the song in a lived-in spiritedness that would slot it comfortably next to all those mid-80’s Creation-led bands – thinking Jasmine Minks here, the Junies and Mighty Lemon Drops – “A Young Man” finds Edwards bringing the full brunt of his peerless wry to bear. Self-deprecating and lacerating, embittered to the point of humble remorse, fatalism slashing now at the open air like a blind King Lear undone not by daughters and mortal regret – well, actually, a fair amount of that – but rather the simple prosaic indignity that comes to visit anyone that dares reach an age beyond their prime, the cut truly cuts, asking as it essentially does ‘What’ve you got to show for it?’ An unabashedly banging track, immediate in that way that insures it will endure – its rousing chorus is quite possibly the most anthemic that resignation has ever sounded – the ultimate irony here is that “A Young Man” is so genuinely strong in its delivery it could shame the Smiths back into existence just to prove – unsuccessfully, I dare reckon – that they could top it.

Leave it to Matthew Edwards, of course, to ride off into a bemused sunset in an articulate rage of compromised triumph. For the listener at least there is joy in that horseman’s defeat but one senses that there is for the singer as well. It is himself, after all, with whom he most often – and ever so deftly – doth joust. To lose a battle is to also thereby decisively win it and that, all things considered, has to be a pleasing prospect.

To be honest, I almost hate to say this – I mean, how droll and predictable – but Folklore is as much the record to beat this year as Fate was five years ago.