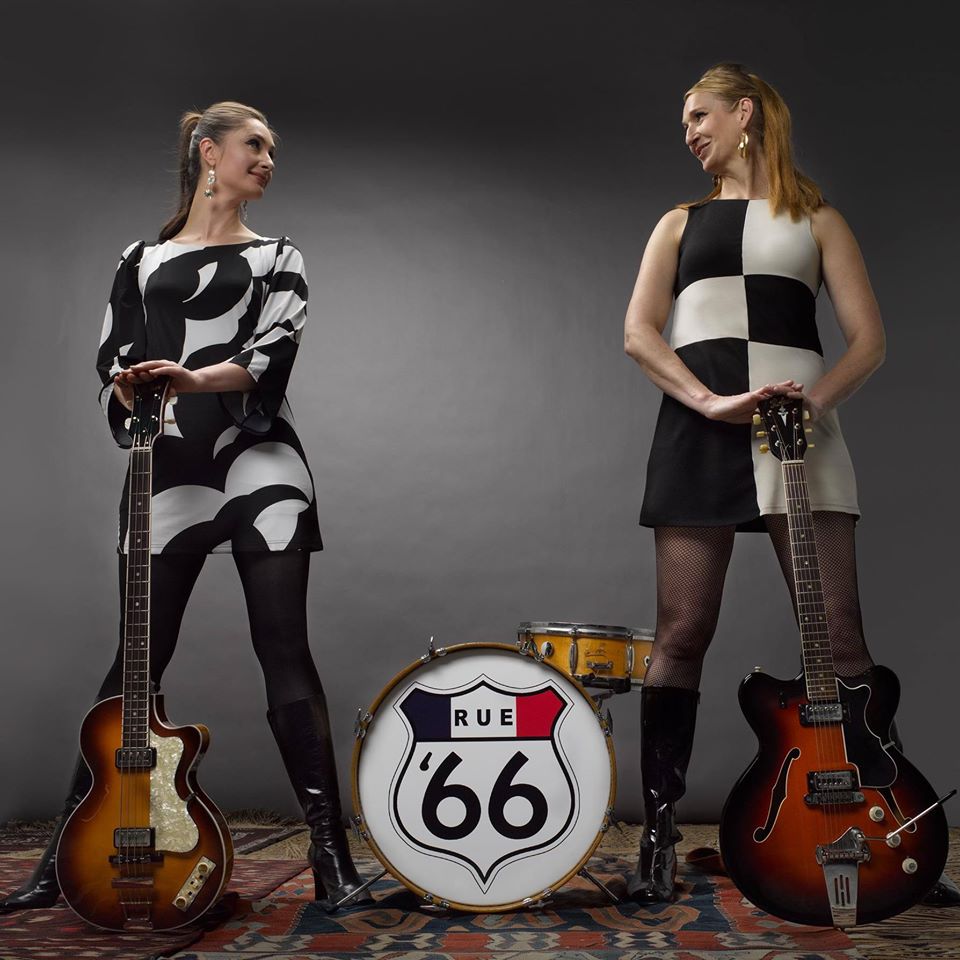 We learned this song from a French ‘60s artist, Évelyne Courtois, who called herself Pussy Cat. We’ve been doing a lot of songs she recorded ever since we started; she recorded her own material – she also covered some well-known songs and some real obscurities like “La La Lu.” We play far more songs by Pussy Cat than by any other artist. “La La Lu” was first recorded by an American group, The Cat’s Meow, in 1966. I doubt it ever charted – we never heard of it until we heard Pussy Cat’s version. Our arrangement follows Pussy Cat’s right down to the guitar riff, which is played in octaves. That was a fun overdub. I asked our lead guitarist, Mark Scardello, to do the same riff an octave up, and he obliged (you can hear the Beatles do the same trick on “The Night Before”). Pussy Cat’s version fades out, but we end on that riff. It’s such a cool riff.

I’ve been trying to learn French off and on for the last 40 years. I came across the phrase, “je t’aime quand même,” and I thought, “hmm… that rhymes, doesn’t it?” It means, “I love you just the same” or “I love you anyway”. It reminded me of the old Phil Spector record, “He’s Sure the Boy I Love” the boy doesn’t have any of the qualities the girl is looking for, but she loves him anyway. So I came up with a few lines like “je t’iame quand meme/ce n’est pas parfait/oui, je sais,” which is just, “I love you anyway. It’s not perfect, yes, I know”. I then added a bunch of “la’s la’s” – I originally meant for them to be actual lyrics, but I ran out of French! I wrote the bridge in English, and Serge took my idea and ran with it, then Serena tweaked the words for us so they flow better. I wrote the music and did the arrangement with a nod to Peter and Gordon. Serge plays lead on this one on an old Framus acoustic 12-string with a pickup in the sound hole (German guitar, German pickup), and Serena plays the cowbell at the bridge (another idea I got from the Beatles). Carol added a lovely harmony. I’m proud to say one of my favorite songwriters ever, Martin Newell, played this on one of his podcasts.

This was co-written by one of the greats of French 60’s music, Jacques Dutronc. It was originally done by Francoise Hardy, another icon of the era – it was on her first album, Tous les Garçons et les Filles, which was released in 1962, so “Le Temps de L’Amour” is probably the oldest song on our album. It’s become a classic, you’ll hear it in movies and TV shows…Serena sings it, it’s her baby. It almost didn’t make it to the album, but Serena insisted and I’m glad she did. Nice piano by Christian – it’s an overdub we did on a nice baby grand at Hyde Street Studios.

This one needs no introduction, it’s “These Boots Are Made for Walking,” the old Nancy Sinatra classic by Lee Hazelwood. We’ve been doing this song since the band started back in 2010 or 2011, and it’s always been a crowd pleaser. The translation is by an artist called Eileen. Carol sings this one, and it features our mighty horn section.

Co-written and originally recorded by Eric Charden in 1966. This was fun for me because I got to add fuzz bass. Serge and Carol and Serena do the question and answer thing. More horns.

This was originally an instrumental by James Booker, “Big Nick,” issued by Peacock Records in 1963. A few years later, Nino Ferrer wrote French lyrics about a picnic (a nod to “big nick”?) for the tune. It’s been done by a lot of people, including Quincy Jones and, more recently, by Mareva Galenter – Mareva was a big inspiration for me in wanting to start Rue ’66 in the first place. We used the Hammond organ at Hyde Street on this one. And the horns were a big help, too.

Okay, now for side two (if this is ever released on vinyl…)

Bill Kelly of WFMU and SiriusXM (the “Guru of the Garage”) has been spinning our version of this one. It was an old garage/psych classic originally done in 1966 by a Florida band called We The People and titled “In the Past“. The French version was recorded by Delphine in 1967, and her record actually uses the backing track by We The People. The Chocolate Watch Band also covered it, in 1968 – our version is a mix of all of the above! We tried to keep the energy of the We The People version and added gong and finger cymbals which I think we got from the Watch Band; I also added some electric sitar in the intro and outro. Mark Scardello played some great guitar on this one. Carol originally suggested this song. It’s always been one of my favorites, though I’d never heard the French version until she introduced me to it.

This is a cover of “Never Too Late for Linda,” which I wrote for the Trip, the garage band I founded in the 1980s (read our interview with Don, below, for more about the Trip and Don’s other musical adventures). It came out in 1984 on a compilation called Garage Sale. The funny thing is, Bill Kelly used to play it back then on WFMU and now he’s played the Rue ’66 version – 35 years apart! With the fuzz guitar and organ, I figured it would be a good fit for Rue ’66 if we could come up with French lyrics, and Serge did just that. He takes the lead vocal, with Carol and Serena coming in for the “non, non, nons”. This track features Christian’s Vox Continental organ: this acquisition was a real turning point for the band.

Co-written and originally recorded by Alice Dona in 1963. It’s about a car crash, which is why you hear that big spring reverb crash at the end. Carol sings this one, which also features the Vox organ, as well as our mighty horns (trombone and trumpet).

Written by our own Serge Martial in 1968 during the Paris riots. It’s about all this craziness going on and a guy just trying to get along. I added a little more fuzz bass on this one, and the horns are on this track again, along with the Hammond Organ. It’s got great guitar work from Mark – we were going for a Monkees-thing with the riff. That said, the track feels more like something from the late ‘60s San Francisco scene to me, like Jefferson Airplane or Quicksilver Messenger Service.

Co-written and originally recorded by Francoise Hardy and released on her 1965 album, L’ Amitié. I have rock writer Richie Unterberger to thank for turning me onto this one. He plays old videos at the San Francisco Public Library, and this was one of the songs he included in his yé yé presentation. It’s from 1965 but feels older in its composition, very Mersey Beat, but the fuzz guitar and drums land it in the mid-Sixties. Our version is an exact copy of the original.

We end with a Jacques Dutronc stomper from his self-titled 1966 album. “On Nous Cache Tour, On Nous Dit Rien” is about the government hiding everything from the people, and Serge sings it with gusto, backed by Carol and Serena. This is a fun song to play onstage.