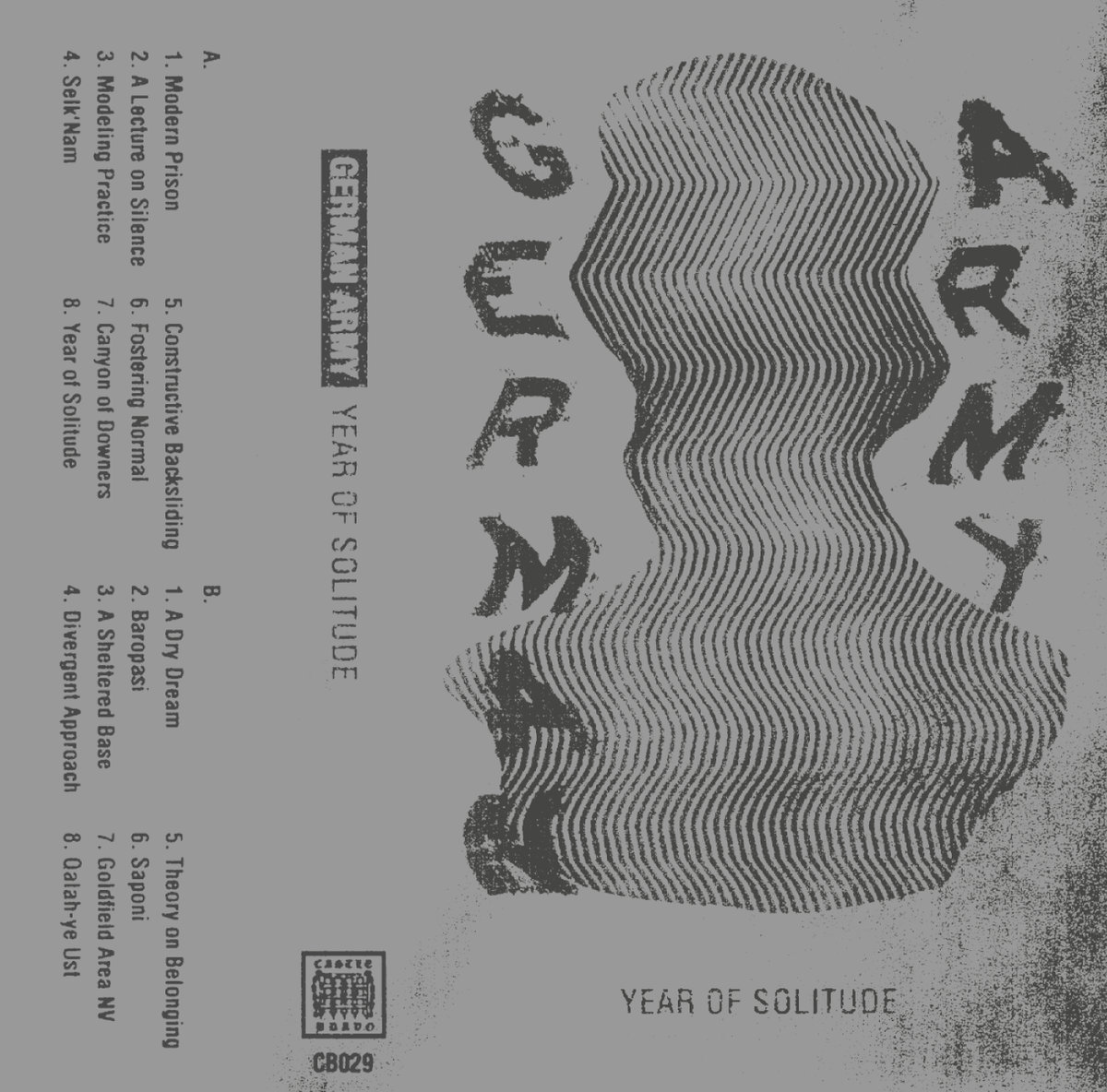 German Army (or GeAr) never fail to stun the senses with every album and with as many releases as they have, it is a wonder that we have any faculties left at all. The one two punch of bandmates Peter Kris and Norm Heston always deliver music that challenges the ear and, if you really care enough, will teach you a thing or two, even on an instrumental album such as this.

Some of what I glean just comes from Googling their song titles. But sometimes PK offers me tidbits. For example, the album title itself is inspired by one of his all time favorite novels, One Hundred Years of Solitude by Gabriel García Márquez. The music contained within is anything but what you would suspect from the title. GeAr are full of vibrant contrasts and rhythmic sounds that make you take notice.

Lead track “Modern Prison” starts with a simple drum machine beat and immediately layers begin to slide overtop of one another pulsing out a nice intro to the album. “A Lecture on Silence” is a reverb-soaked percussive exercise that is anything but silent. Always concerned with third world aboriginal people and their language/cultures, the references are not lost here with the tracks “Seik’Nam” (also called the Onawo or Ona from the Patagonian region of southern Argentina and Chile) with it’s meditational beat and almost vocal like keyboard sounds, “Baropasi” (which is spoken in part of the Indonesian province of Papua by only about 1,000 people), with it’s sparse, echoey tapping and drone keyboard making a haunting and open sounding track, and “Saponi” well reflecting a sound not too far removed from the origin of it’s name (the Saponi were a Native American tribe historically based in the Piedmont of North Carolina and Virginia). Album closer, “Qalah-ye Ust,” harkens back to a previous GeAr release Wakhan Corridor as its title is the name of a mountain village in the Wakhan region of Badakhshan Province in north-eastern Afghanistan. Looking at some photos of the region while listening, the harsh electronics that pour forth maybe give an indication of how it is living in that area.

That is the tip of the iceberg for this album. These are sixteen of some of the best modern industrial, experimental, noise, avant-garde, what have you songs. Pigeonholing GeAr is something you just can’t do. The slow rhythms of “Modeling Practice” offer some sense of serenity, but before complacency settles in your brain “Constructive Backsliding” with it’s manic beat comes along and blindsides you. “A Dry Dream” is a phased out jam that would fit right into the Blade Runner soundtrack, while a little further in “A Sheltered Base” seems more fit for Peter Kris’ solo project called Concrete Colored Paint in which ambient soundscapes have minimal instrumentation splayed across them for texture.

If you are not familiar with GeAr, A Year of Solitude is an excellent place to start. It has all the hallmarks (except vocals) that you come to know and love about the band. Old school fans will be right at home too. The breadth of this album is pretty vast. It demands attention. Repeated listens always offer so much more detail than you can’t pick up in just one listen. They are more than just a band. They are a course in humanity. Just open up and dig a little. The journey is one well worth taking.

Never ones to rest on their laurels, they have already announced the next album is on the way. A massive 3 cassette tome called, Salary of Stagnation. Keep your eyes peeled but take some time to absorb this first. You will be glad you put the time into it. It is definitely one of the most satisfying 40 minutes of my year so far.

Keep up with German Army:

Order Year of Solitude on cassette or digital: https://castlebravotapes.bandcamp.com/album/year-of-solitude