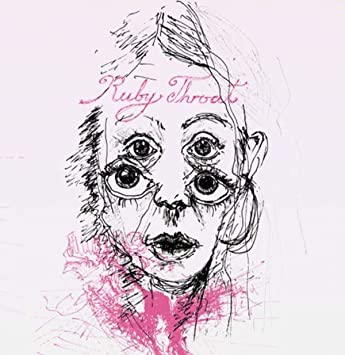 There are also foggy riverbanks and roaming ghosts and rising blood red tides and Minotaurs and murder.

The former singer of Daisy Chainsaw, Garside’s delivery has always been a powerful and evocative tool, but over the years she has progressed from the haunting to the positively otherworldly.  Her new band Ruby Throat plays a hypnotic brand of mythical folk music that veers from country death songs (“Swan And The Minotaur”) to gothic lullabies (“Dear Daniel”).

There are swooning ballads (“Salto Angel”) and hushed hymns (“The Ventriloquist”) and Garside presides over it all with an understated, if not tragic authority.  Like a drowned medieval princess singing from the depths of watery despair, she brings to mind the crushed romanticism of Kate Bush (see “Lie To Me”).  But while Bush stayed up late singing of Wuthering Heights and hounds of love, Garside stays up late swinging swords in slow motion and biting at her stitches.

This is a dark and lovely gnawing away.