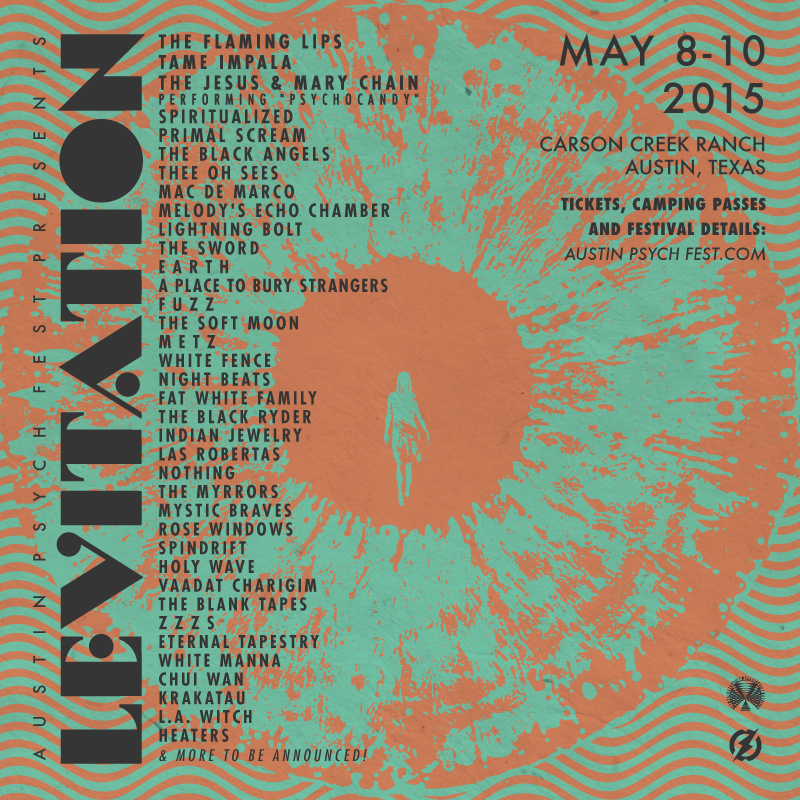 After shifting the iconic name ‘Austin Psych Fest’ into the role of the event’s organizing and promoting arm and renaming the actual event itself ‘Levitation,’ the wildly burgeoning affair, by now among the world’s most premier happenings for all things psych (itself a multi-limbed, hydra-headed animal these days, though that may just be the drugs kicking in), the festivities are due to kick off May 8th at Carson Creek Ranch and run for three very solid, exceedingly far-out days. As always, the line-up is beyond stellar, pulling in the genre’s biggest names – Tame Impala, Black Angels, Thee Oh Sees, White Fence, the 50th anniversary appearance of 13th Floor Elevators (!) among countless others – as well as attracting many equally luminous bands from regions that edge slightly beyond the psych fringes and into shoegaze,  post-punk, and just plain punk (the reformed Jesus & Mary Chain, The Soft Moon, A Place To Bury Strangers and Metz are all slated). Truly, the festival’s gravitational field is doing nothing but expanding and becoming stronger every year. But as massive and wonderful as Levitation certainly is (and as much as one wonders if it’s just a matter of time before Levitation themselves reform and show up in Austin), we couldn’t help noticing that some choice members of the exploding inevitable psychedelic family are missing from the great lysergic convocation down south. And since there’s another round of last-minute announcements due regarding the line-up, and since we’re betting that the organizers have their hands full enough as it is, we here at Stereo Embers thought we’d pitch in and help by offering our own recommendations. Besides, every one of the bands below, presented in gloriously random order, is in the full bloom of their powers and deserves a shot at the great gig in the Lone Star sky.