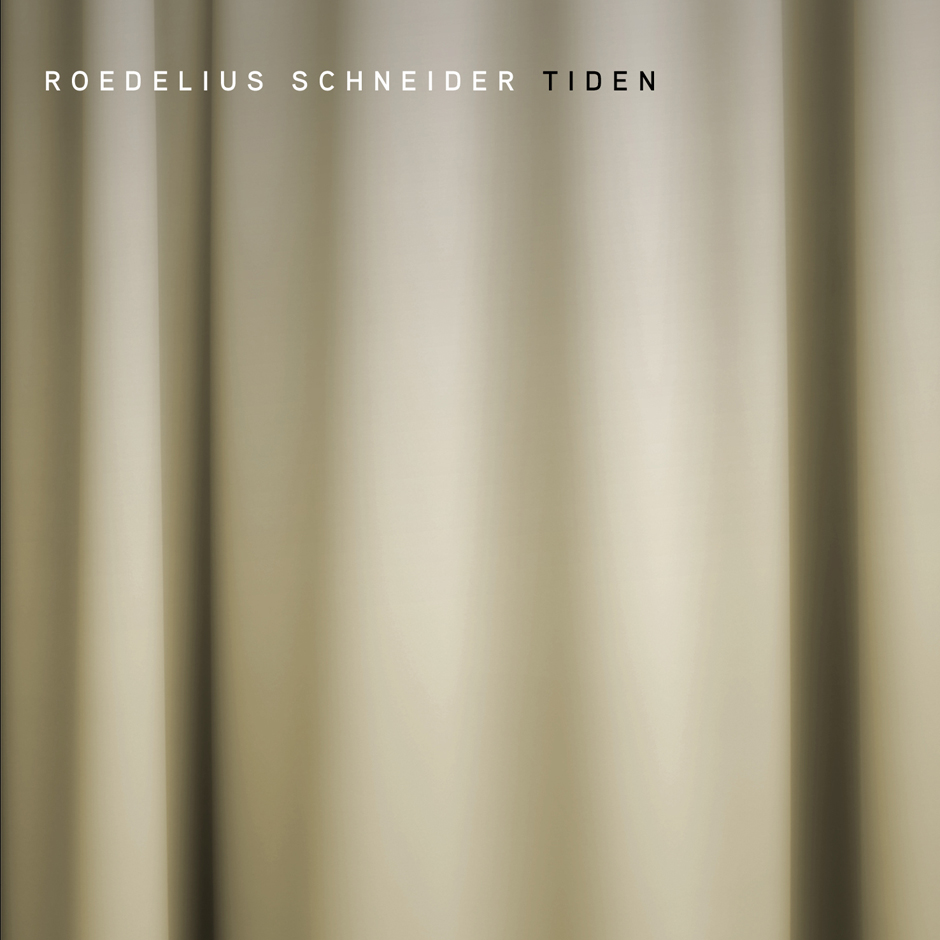 By Paul Gleason and Alex Green

Roedelius Schneider pairs two pioneering legends of German experimental electronic music – Hans-Joachim Roedelius, who founded the seminal bands Cluster and Harmonia, and Stefan Schneider, who cofounded Kreidler, is a member of To Rococo Rot, and releases albums under the name Mapstation.

Roedelius’ lineage alone makes Tiden a necessary listen. The Cluster album Zuckerzeit and Harmonia’s Deluxe are two of the most important records to come out of the Krautrock scene of the 1970s. These albums inspired Brian Eno so much that he took time off from working with David Bowie on the “Berlin Trilogy” of Low, “Heroes”, and Lodger to improvise two experimental albums with Cluster – Cluster & Eno and After the Heat.

But even though Tiden owes a lot to Eno and Cluster, it doesn’t sit well in either camp, mainly because Roedelius and Schneider create compositions that derive equally from their interest in nineteenth-century Romantic music, especially Franz Schubert’s Six Moments Musicaux and Impromptus.

Roedelius plays grand piano and synthesizer, and Schneider handles the electronic effects. Their musical interactions paradoxically give Tiden an atmosphere of planned complexity and improvisation, which suggests the work of Schubert.

Roedelius holds down the opening track – “Umstunden” – with a minimalistic piano melody, while textural noise and percussive effects take the track to a different place, one of gorgeous complexity. These effects, of course, disallow the track from being heard as ambient music. They mean you have to pay attention to the track as a composition.

The same goes for the rest of the tracks on Tiden, only three of which run longer than three minutes: “Umstunden,” “Indie Woogie,” and “Toast.” “Indie Woogie,” the album’s second track, has the same aesthetic as “Umstunden.” But “Toast,” which comes near the middle of the record, differentiates itself by featuring a pulsing dance rhythm that sounds like it could have come off a Portishead album. Roedelius and Schneider put texture on their “Toast” with fascinating synthesizer notes and other effects.

The 10 other pieces on Tiden remind one of nineteenth-century etudes and feel spontaneous in their exploration of disparate musical styles. “Frankly” is another dance-y number that could be played in a club. “Hohner Omen,” which follows the poppy “Toast,” finds Roedelius and Schneider experimenting with jazz rhythms. “Nuance” combines spacey synthesizers with piano to move easily between minimalism and complexity. And “Unsettled Hours” sounds just like its name – its tonality lends it an ominous quality, with a dark synth line that backs mysterious noise touches and piano notes. This track is as close to Cluster as Tiden gets.

Roedelius and Schneider are also interested in creating etudes of sheer beauty. “Whose Contact?” thrives in beautiful minimalistic piano chords that never really resolve in a complete melody, and its percussive effects, which drop in and out of the mix, only make the track more compellingly elegant. “Bald” begins with a disorienting synth squawk, and then Roedelius enters with a lovely piano motif, which electronic effects that should be disconcerting augment to perfection. The mix here is just right. And just listen to the astonishing piano melody on “Anderer.”

Tiden, overall, is a masterpiece of intelligence, emotion, and creativity. Roedelius and Schneider have given us music that, whether it comes in the form of a long or short piece, makes us feel just as much as it makes us think. They’re builders of the sublime.

Stereo Embers: From a technical standpoint, is it easier now, with the advent of such technological leaps, to make the kind of album you hear in your head, or is it as challenging as it ever was?

Stefan Schneider: I think it is probably as difficult as it has ever been as you don’t want to reach goals but to invent goals. Possibly, when it comes to new technologies it is even more complex than ever. Just having in mind all the confusion of new digital technology that desperately tries to imitate analogue machines.

Although there are so many electronic sounds accepted everywhere in our everyday lives, people, when it comes to electronic music, seem to need  “warmth and humanity ” as machines were not constructed by humans.

A few years ago I have watched a great documentary movie about Swiss artist Hans Josephson  (approximately then is his early 80s) who said that he as a younger artist thought that at some point in his forthcoming career he would reach a degree when the production of a new piece does not require to resolve any questions anymore. He said how naive he must have been back then, as for the production of any new piece he always has to go through all the same questions again no matter how much experience he has gotten through the years.

SE: The reason I ask is that in the ’70s and ’80s, for example, trying to capture a creative sonic vision using the available studio technology of the time, must have been at times an elusive exercise–however, not an impossible one.

SS: I don’t think so. Maybe that is because I never really had ‘sonic visions’ in my mind. I vaguely remember the arrival of the first Atari computers in recording studios over here. It pretty much opened new possibilities and new fantasies right away. The same goes probably for tape recorders in the ’50s or early computers that still worked with sheets and stencils or for Maxmsp now.

SE: In some ways, however, perhaps the available elements nowadays might make some artists less given to improvisation. I heard Nick Cave talking about seeing Einsturzende Neubauten in  the studio back in the ’80s and they were hooking up microphones to themselves and punching each other in the stomach…

SS: Electronic music to me has been a field of freedom to explore sound and structures for sounds. Maybe today software like Ableton Live for example, are a little too convenient, as they exactly fulfill the wishes of musicians. On the other hand, there are so many great productions being made on contemporary software like a lot of Dubatep and Footwork on Reason (as far as I know) that there is no need to worry about contemporary ways of improvising.

SE: Do you find that your sonic interests have changed over the years? And how so ?

SS: As I am a self-taught musician I constantly come up with new questions, especially in terms of technique. Only a few years ago I discovered what a compressor does in a mix. It took me quite a while to actually hear the difference between a signal that has a compressor on it and a clean signal. Sometimes when you are working in a studio situation it simply needs time and listening experience to achieve something new. During the past couple of years I became more and more interested in studio recording and mixing. But there are still so many things to discover. For instance, a 6/5 beat pattern, which took me some time to understand. One thing I have always enjoyed (and played a certain role many times) are field recordings, as they enable me to be outside a controlled studio situation.

SE: I’ve always admired the sheer architecture of your compositions–even the more spare numbers in their silences and pauses have such…structure. I imagine that your process is quite intricate.  How does a song germinate?

SS: I have no idea as there does not seem to be a big concept there beforehand. Usually I just start to work and then I finish when I think there is nothing more to say about it. When I listen to something which I don t like I usually play it slower to make it more accessible.

SE: I love this record because it feels like such a definite song cycle–was sequencing a tricky element or did the order of the songs come quite naturally?

SS: There is not so much sequencing going on Tiden. I mean technical sequencing. Even the 808 is sometimes running without being midi synched to the other instruments. Joachim’s parts are hand played anyway. Most of the bass pulses are coming from an arpeggiator (Novation Bassstation) which you cannot synch to any other instrument as it is not running in bpm speed. On those songs we did record the arpeggiator first and then had to play anything else on top of it. I usually play loop-based notes by hand (,on bass git or synth) – the whole track through. I do not like to edit short phrases on my computer and loop them technically. No matter how long the track is and how simply or complicated a loop is it has to be played the whole way through. In my opinion it makes a song more vivid.

SE: What’s your take on bands like Daft Punk who have been so successful with their blend of  electronic music?

SS: They found a way to excite bigger audiences. There is nothing wrong with this. I find people like Carsten Nicolai with their ostensible conceptual approach and their shallow results more difficult.

SE: What are your musical goals for the future?

SS: I have just returned from a wonderful journey to Kenya where Sven Kacirek and I did record a singer called Ogoya Nengo who is in her early 70s. Her songs are kind of a rare call and response music which dates back to the early ’60s. We are working on the final mixes right now and hope that it will become an album. Two years ago we did recordings at the coast province in Kenya (Mukunguni) which were released by Honest Jon’s this year in April. Of course Joachim and myself are looking forward to playing live shows this autumn and winter.

SE: How has your approach to your craft changed over the years ?

SS: It is still the amateur view.

SE: Do you ever feel  misunderstood as an artist? Or do artists always accept that they will be misunderstood on some levels and not concern themselves with such things?

SS: During the first couple of years we were sometimes quite annoyed that so many people did compare the music of Kreidler to Krautrock. We definitely felt more like a pop band without vocals. Hip Hop loops played a certain role although it wasn’t that audible. In the public opinion it seemed that all groups from Germany have to be automatically influenced by nothing else but German music. When we started playing with Kreidler in 1994, most so-called Kraut albums were not even available in Europe. So we ended up visiting Klaus Dinger of NEU! who lived not far from our rehearsal space and asked him about the music of NEU! as  people in the UK said that we were influenced by him. I still have a cassette of NEU 2 that he gave us. Now I feel quite relaxed about it as obviously people should make their own stories about what you are doing. As soon as the music leaves the studio or the stage and becomes accessible it would be foolish to want to control it.