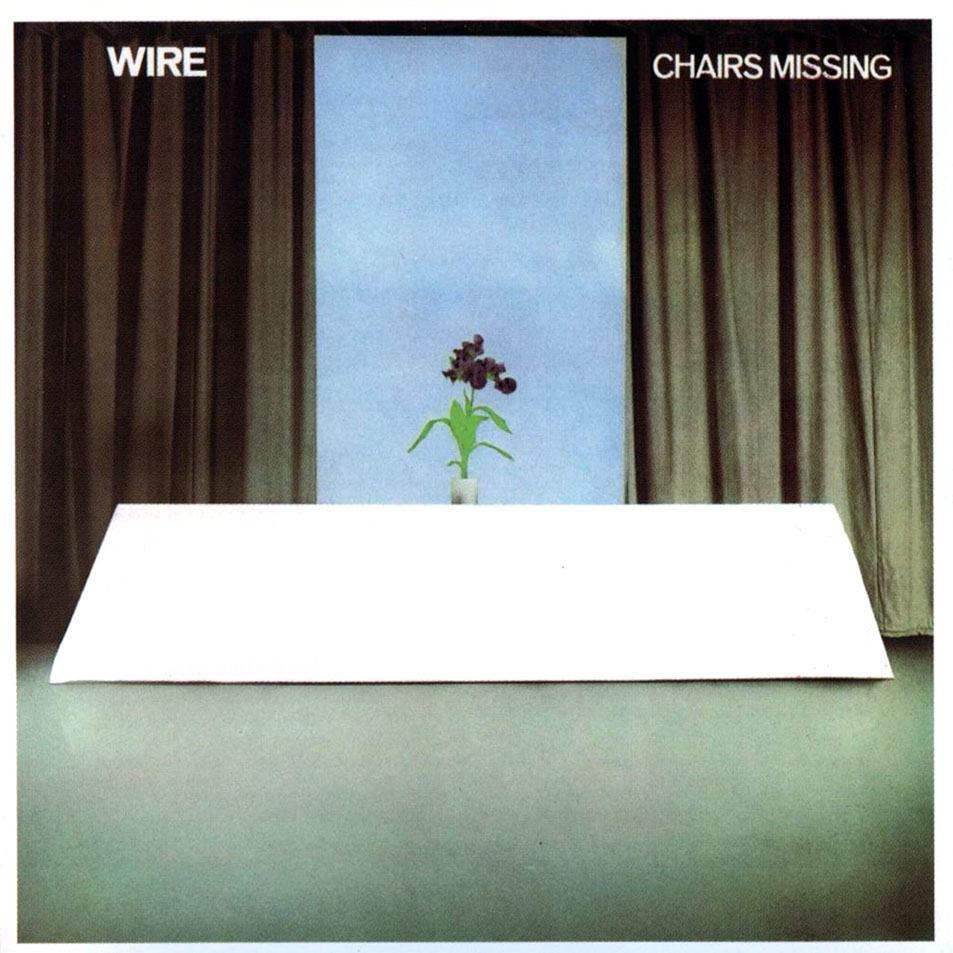 It is a piece of indisputably received wisdom to view the band Wire as an entity that doesn’t stand still. In terms of pushing forward, of riding a ceaseless crest of creative momentum, they have precious few contemporary peers (Swans come to mind, and, umm, well, that’s about it). The closest they’ve ever come to any sort of looking back was last year’s Change Becomes Us, an unbelievably strong record that drew as its foundation material left over from the 154 sessions that had received scant airing. Thing is, that material was so thoroughly and daringly made over, honed and reshaped with such acumen and authority that the record’s title reads less a clever marketing impulse as it does the most succinct statement of artistic philosophy imaginable. Not to be too flippant but Wire are the equivalent of a post-punk shark – if they stop swimming they’ll die.

Even as infallible logic suggests this should be any true artist’s path, we all know how rare it actually is in the rock world. Commerce, it’s believed, does not consider a headstrong, headlong artist or band to be its best bedmate, an outlook stood on its head as Wire continue to flourish, if modestly compared to your basic Katy Perryan metric. In the very beginning, however (and if I may be pardoned for saying), with just the compressed punk juggernaut of Pink Flag in our hands, there was no way of knowing any of this. For all any of us knew, based on that debut, Wire were just another rat-a-tat punk band – albeit an unusually astute, actually quite intriguing one – cramming 21 relentless, rather assaultive tracks into 37 minutes. In less than eight months time, though, a span barely long enough to allow for the year to click over from ’77 to ’78, the true nature of exactly what sort of beast we were dealing with would be revealed with the release of Wire’s second record Chairs Missing. It was not a minor revelation.

We were all busy then, delightfully battered on a weekly basis by a tidal wave of sound and stimuli, the music buzzing out of the UK and the American underground providing a visceral/cerebral soundtrack of such intensity as to match the electric immortality of youth. Everyone felt plugged into the same current somewhere along the line, willingly sticking their fingers into the socket for another three minutes of agitated glory. Then came Chairs Missing and everyone stopped in their tracks, double entendre intended.

From those very first bass moments of “Practice Makes Perfect,” Graham Lewis giving the impression he’d figured out how to turn the shadows of a Paul Bowles novel into sound, it was clear something was up and that ‘something’ was so far past the boundaries of our expectations our ears required new maps. From lyrics that swirled in a labyrinth shaped by the contours of a troubled romantic architecture (the album as a whole took the elliptical lyrical content that had marked out Pink Flag and elevated it several strata upward) to its comparatively lugubrious – if swoonsome – pace to a quiltwork of bewitching atmospheric effects, the response of a mouth-agape silence in those hearing it for the first time was all but assured. All the evidence needed that here was a band evolving at breakneck pace was submitted in those first four minutes. Fact was, though, it kept mounting as “..Perfect” gave way to “French Film Blurred.”

Though not as immediately arresting as its predecessor, its hazy murky character, matching as it does the song’s title, converts a rather quiet, mesmeric head-nodder into a fully-contained and self-reflexive work of art, surely their aim (one ably abetted by producer/veritable fifth-member-at-the-time Mike Thorne). It’s the type maneuver that might invite sniffy accusations of high-brow conceptualism but with Wire such barbs, should they come, would be instantly dulled by the fact that that was exactly the band’s intent. Wire were embracing head-on the notion that what they were doing was an act of art, potential allegations of effeteness or some sort of punk betrayal be damned (it should be noted that critical response was almost universally glowing, though fanzine Ripped & Torn, in a review of single “I Am The Fly,” did refer to its parent LP as ‘turgid,’ so clearly some in the punk mafia felt a bit miffed). That said, there’s nonetheless grist aplenty to sate one’s thrashier hunger. 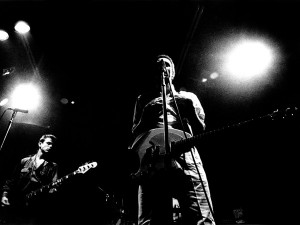 Third track “Another The Letter,” for instance, with its guitar’s mosquito insistence, a frantic trebly keyboard that rather harasses, and some rattle-shake tin box percussion, while not quite relying on the aggro-serrations of Pink Flag, can still find time in its brief minute and five seconds to unsettle, while the heavy front-parlor riffing of “From The Nursery” that musically stomps about like the more rough-hewn cousin of “Practice Makes Perfect” that it is, has a nice gnashing teeth groove to it and the nerve-addled, regret-rattled “Too Late” pours layer upon layer in a self-hounding frenzy until it quick-fades to end the album, its stuttering fury exhausted. Then there’s “Sand In My Joints”‘ barely-contained chaos, its straightforward punk progression getting pulled apart by a double-tracked guitar-attack noise that sounds as if a couple of ham radio operators are going after each other with shards of randomly aggressive feedback. Yet even in these instances of apparent bash and abandon, the links to what was then a very recent past are dimming and falling away, replaced by subtler and more expansive trappings – the Eno-likeness of “Another”‘s last few bars, “From The Nursery”‘s deliberate pace and melodious middle eight, the way “Too Late” opts for a churn that’s more krautrockish than abrasive, while “Sand” is more or less avant, like Derek Bailey punk – and it’s ineluctably clear that the flag that had been planted on more anarchic flanks just a few months prior has already fallen behind the back window horizon of Wire’s rapidly spinning world. It was enough to make us dizzy.

The oasis shimmer of opening synth on “Being Sucked In Again,” when met by the noir intrigue of Graham’s bass then jarred about the edges by a two-level storm of chorded electric guitars from Bruce then Colin has us descending into an emotional trough of a landscape, not a territory a Wire fan was accustomed to visiting but one it was evident from much of this album we should get used to. “Being Sucked In Again,” apart from its drowning allegory, rather makes one feel lonely and dispossessed, similar to the way “Marooned”‘s sonic ground underlines precisely its title’s state of mind and body, this time with a haunted tiptoe bassline (Graham’s deftness of touch can at times be devastating, menacing in the quietest, most assured way), Colin’s calm, storytelling vocal (“an unwilling sailor adrift from Arctic waters”), and opaque, insinuative atmospherics laying in a bed of dissettlement. “Mercy,” for mercy’s sake, makes us viscerally jump at the 0:36 mark when the second guitar comes crashing in and we’re on an anxious edge throughout its (previously inconceivable) five minute forty-one second length, the sense of emotional exhaustion at its conclusion only balanced by the sheer bloody thrill of its sound, a tension that would come to define Wire at their very center. When enhanced by their compulsive penchant for the challenging, unexpected structural shift you have a band that’s a quantity apart.

Beyond all this palpating engagement with the heart, perhaps Chairs Missing‘s most startling aspect was its many instances of outright radio-friendliness. The record is simply lousy with 45-caliber sides, a spilling clutchful of singles-in-waiting, which was probably not the first thing anyone said about Pink Flag, the likes of “Fragile” and “Strange” notwithstanding. And the fact that much of this second record was, as we now know, already conceived when the band banged out their debut at Advision Studios is immaterial, since at the time all we had was the hard, cold, stunning evidence of the thing itself, and it was, without exaggeration, a wonder to behold, not least for this happy parade of ‘hits.’

Just for starters there’s the way “Heartbeat” cumulatively ingratiates itself with its listener’s pulse rate until it apparently becomes that very same blood engine, which is, in a sense, the very definition of irresistible. Or “I Feel Mysterious Today”‘s (rather surprising) cheeky perk, complete with its woodblock percussive touch and Graham’s rather droll vocal asides popping in now and again, the compressed avalanche of noisy abandon at its conclusion not enough to distract from the beauty of its core lyrical hook which, um, hums in one’s mind long after the short song has broken off. Or the sumptuous Low-indebted “Used To,” the slow arch of its aching progression both warm and detached, much of the track bathed in mellifluous drone harmonies and a rich kind of baritone synth running at half-speed and exhibiting a tone somewhere between a burnished scuff of chrome and the vaporous air of a cool evening. It’s short, barely over two minutes, but long enough to lose yourself in a silvered, post-romantic languor.

The two actual singles, “Outdoor Miner” and “I Am The Fly,” play back to back two-thirds down the playlist, the former – an ode to a tiny clorophyll-eating worm, words penned by Graham, and lengthened a minute past its 1:45 for its 7″ close-up – representing Wire at their most lucently accessible, blessed with something of an understated chrysalis of elements that include a lulling bassline, a lyrical pop vocal that carries the esoteric subject matter into an almost sunny posture, and a chime of a guitar track that’s about as close to a jangle as this band ever gets; the latter more of a churner but no less charming, a layer of abrasive, treated guitar meeting one (and eventually two) higher-up, delicately jagged ones, plus an echoed mass of handclap percussion among sundry other effects and a singalong chorus still being sungalong to some thirty-six years later. None of which is to mention “Practice Makes Perfect,” the genius at the head of the class.

Straddling, merging, contrasting, and cross-weaving the brilliantly disparate strands of canny pop experimentalism and a level of sonic adventurism to rival the likes of Eno or Can, combined with a burgeoning mastery of the studio – a mutual arrangement of ambition with Mike Thorne – Chairs Missing marks the jumping off place for Wire, the place where utter – some might say flagrant – artistic courage was drafted as the band’s core tenet. From this point forward no footstep, once created, would ever be stepped in again. And as much as that’s an admirable stance, it’s also a perilous one, as sometimes you’re going to lead yourself out to a rocky ledge somewhere with no apparent way out. But it’s out there where the most interesting, daring decisions get made, and it’s clear from the two albums we’ve had from them here in the 2010’s (Red Barked Tree and Change Becomes Us) that Wire thrive exactly on that highwire pressure and challenge and couldn’t operate any other way. No band matches them.

[You can find interviews with Graham and Colin here and here, my colleague Paul Gleason’s review of Pink Flag here, and an exclusive excerpt from Wilson Neate’s illuminating book on the band Read & Burn: A Book About Wire here]