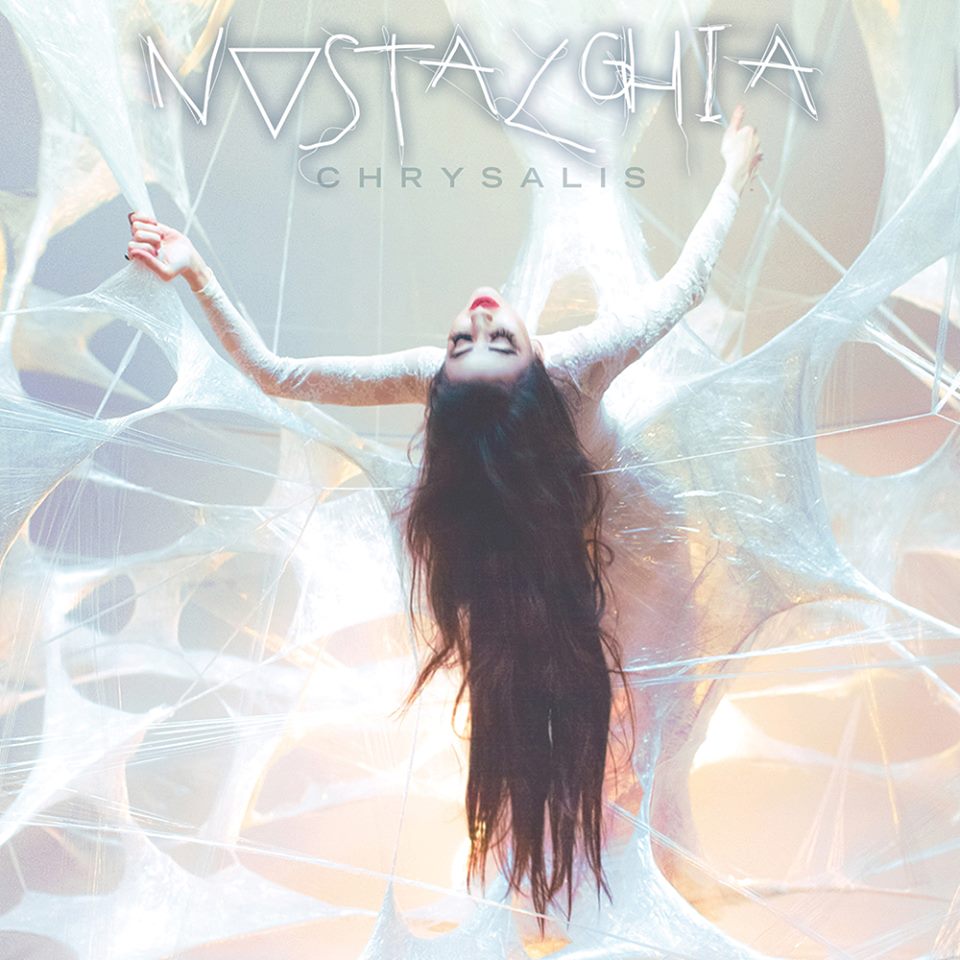 Nostalghia’s debut LP begins with one of the most appropriate samples in recent memory—the sound of flapping moth’s wings morphing into the darkly menacing song “Chrysalis,” the album’s title track. By the time front woman and songwriter Ciscandra Nostalghia intones her equally dark vocals, she’s already convinced you that she and her bandmates—drummer Roy Gnan and cellist Adele Stein—have made a record that is indeed a chrysalis.

“Chrysalis” demonstrates this in Ciscandra’s lyrics, which dramatically announce the formation of identity in melodic lines that recall Patti Smith, Michael Stipe, and Björk—singers who revel in using their bodies as noise-producing instruments. Like these three forebears, Ciscandra knows how to set a mood with her voice, and Stein’s strings work in tandem with her to create intersecting melodic lines that indicate the birth pangs of emerging from the chrysalis.

But the thing is, throughout the record, Nostalghia never fully escapes these birth pangs. Chrysalis is, after all, about the pain of birth, and it’s also about the joy of growth. It’s about changing listeners’ perspectives, so that they see pain and joy as one glorious process.

I know that this attempt at perspectival change is gutsy and rare in a debut record—or any record, for that matter—but Nostalghia aren’t just any band. They’re that rare band that comes along every so often—that rare band with a new sonic template that provides listeners with a new framework with which to see the world. They’re that vital.

“Homeostasis” suggests animalism. It’s positively pagan, and Ciscandra’s vocals recall Nietzsche in the way in which they deliver lyrics about the physicality behind the will to stay alive through bodily processes, which contrast sharply with the machine-like, dark electronica and Stein’s classical-flavored strings.

While the electronic “Stockholm Syndrome” illustrates Ciscandra’s ability to use her terrific vocal range and original phrasing to delve into her most introspective places, “Naked as a Hand” is all nakedness—with Ciscandra’s lovely vocals in duet with a picked guitar. The rest of Nostalghia—Gnan, with his sparse drum hits; and Stein, with her epic strings—eventually transform (again, Chrysalis is a record of transformation) into a grandly beautiful piece of music, which concludes with some stunning Ciscandra high-register, wordless, a cappella singing.

“Cool for Chaos” features a quiet piano and vocal and then launches into a full-on, Nostalghia noise assault (listen to Gnan’s drums and the band’s drone-y feedback!), which Ciscandra announces with an unexpected and gripping scream—a scream that’s the polar opposite of the tender “You + I,” a poppy number that retains the sonic innovation that’s Chrysalis’ calling card. Stein’s cello is absolutely gorgeous on this track. And I think I hear her plucking her instrument on the ominous ballad, “Sunshiny Milk,” which starts sweetly and then (d)evolves into Ciscandra’s profanity-ridden, introspective angst: “I’m fucked in the head.”

“I Am Robot Hear Me Glitch” is all piano, strings, and yet another great Ciscandra vocal. It’s another winner that shows Ciscandra’s contemplative lyrics and Nostalghia’s ability to reach a heavy crescendo. The surprise here is Ciscandra’s angelic backing vocals, which form an essential part of the song’s build.

Positively cinematic, “Meek” explores the dynamic between Ciscandra’s isolation—suggested by the A sections, which feature only her voice, cello, and mechanically percussive backing—and the grandiose communal sweep of the strings and elongated vocal melodic syllables of the B sections. It’s impossible not to get caught up into this sweep and not to recognize that “Meek” could be the best song on Chrysalis.

But “I’d Still Kill You” inarguably has the most astonishing vocal performance on the record. What begins as a rather simple ballad for voice, acoustic guitar, and piano builds into Ciscandra going up at least an octave in her impressive register and managing to sound wounded by and angry with an ex-lover at the same time. And I can’t get over the notes she hits at the song’s conclusion.

Concluding track “The End” has perhaps the most beautiful vocal melody on Chrysalis—not to mention Stein’s most evocative string arrangements. This is a song of despondency, existential uncertainty, and God. Listen to it and try not to tear up. “The End” is the sound of a woman and a band having the courage to put their souls on display.

What more can be said about Nostalghia and Chrysalis? Nothing. Now it’s time for me to shut up and for you to listen to a record that you’ll want to hear over and over again as you unveil its endless mysteries and grow, grow, grow…