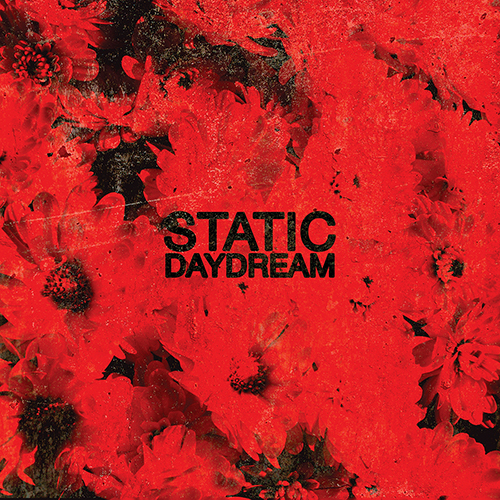 As already established by SEM’s exclusive video premier last week (not to mention 2014’s The Only One EP), Static Daydream, the new brain(wave)child of Skywave and Ceremony member Paul Baker, know their way around a psychy sonic noise wave song. Asking us to buy in to the notion of JAMC hauling in some FSA vibes and lashing them to the mast as they sail through the same treacherous oceans of massive but melodic electric guitar mayhem as have been previously traversed by the likes of Swervedriver and Hüsker Dü, storm clouds of Pixie dust included, we eagerly sign on the vibrating dotted line.

With, most often, great sheets of decibels washing by like exquisite, finely-wrought gale force tapestries, this is not only shoegaze doin’ 90 in a 55 zone but as well the blooming rush of a kind of metallic psychedelic pop that excites as much as it soothes. The Daydream’s swirls tend to slice (and/or the other way around), their ambient dynamics soaring in various sunflashes while the melodies remain grounded, down here where you can get a hold of them, wrap your ears around them, dance to them. And fall in love with them. Though it’s only fair to keep in mind Baker’s previous experience etc, nonetheless, as debuts go, this is a crusher. Whether we’re talking the rather epic (and romantic) pop assault “The Only One” – directed, one assumes, at girlfriend and band partner Jamie Casey – that’s basically MBV come down off their Mt Olympus, the Mould-breaking “More Than Today” that sets Jamie’s lucent vocals delicately down inside its pounding motorbike rhythm, the gorgeous if thunderous “Run Into Night” (Casey’s vox again) that seems to launch itself further into the ether with each passing measure, or the frantic yet immersive “Another Rainy Night Without You” that dovetails its classicist “Just Like Honey”-like vocal melody with, of all things, a corrugated Crazy Horse edge (notwithstanding the shiny chromium, sky-piercing solo that carries it home), this self-titled debut truly is a stunningly solid ‘just pick one’ set, eleven strikes and you’re on. If you remember Seam – and here’s hoping, the Sooyoung Park-led outfit from the 90’s were brilliant -this is like them pulled through a sublime, frequently turbo-charged accelerator, walls of sound going liquid all around you, expertly-applied efffects and seamlessly inserted tempo shifts gilding the edges like transonic gold leaf.

The exception gloriously proving the rule here is the bewitching “Just Stay,” a mid-tempo’ed, multi-faceted emerald that doesn’t so much strip back the layers as massage and reimagine them into something unexpectedly hypnotic and deeply effecting. Drawing on a gentler palette, built on a snazzy but subtle shuffle and a bassline that’s half “Homeboy” half snaking goddess, it’s a transcendently quiet moment amid the broader grandeur that, via some sort of inverse ratio paradox, just might be the record’s most forceful track. That, however, is for you to decide once you pick this up, which of course you will because none but a fool would go without it. And anyway, you don’t want to get to December and see it studding a host of year-end top ten lists and think ‘Oh man, why didn’t I believe that guy?’ Who needs regret as the holidays are breathing down your neck? Static Daydream is available August 28th on Saint Marie, but, for your regret-avoiding convenience, you can pre-order it here.