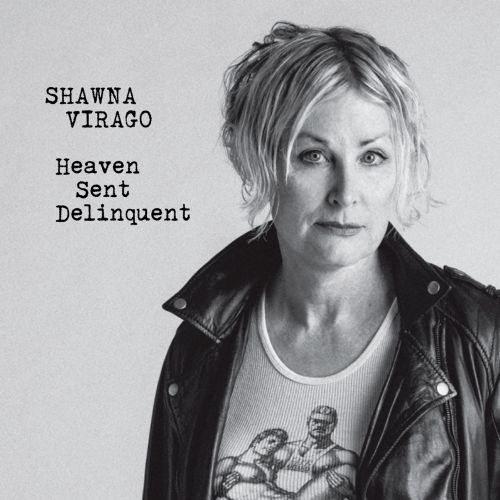 NYC native, transgender rights activist, and veteran anti-folk/Americana singer-songwriter Shawna Virago is an ace at creating an apt turn of phrase and direct, yet compelling melodies that are hard to shake.  Virago’s latest album, the cheekily titled Heaven Sent Delinquent, came out earlier this year via Tranimal Records.

Virago is a transgender trailblazer who has been championed by the transgender, and general, artistic community for her powerful and thought-provoking work as a musician and storyteller, writer, activist, and more.  She has been featured in hot topic publications like Bitch, The Advocate, and Curve and progressive radio stations.  Virago is also the Artistic Director of the San Francisco Transgender Film Festival and has published material in Gender Outlaws: Next Generation and various anthologies.

Virago’s own life experiences, as well as her observations of and imaginative immersion in other people’s lives come to fruition via her vivid lyrics, which distill the essence of oppression and escape, loss and hope, trials and triumph that we all face every day, and especially the discrimination endured and acceptance and celebration of those who exist in the minority or outside the accepted mainstream convention.

The singer-songwriter’s acoustic guitar and vocals set-up may be spare, but the impact of her vocals and lyrics – and their import- leave their mark. Virago released a video for “Gender Armageddon” where she’s on stage and in the spotlight; just her and her guitar, and the imagery and meaning of the song will define the mind for a long time after the video ends.

All of Virago’s songs are of this ilk; richly to grittily finger-picked, dynamic guitar-playing and passionately plaintive vocals that dance around deeply resonant and incisive lyrics. She pushes out, draws out, and twists around her words, sometimes with a prominent country-inflected twang, into ever-changing emotional peaks and valleys, buoyed by fleetly strummed and picked acoustic guitar notes.

Virago adds a soupcon of slyness to the seriousness of her lyrics and vocal delivery on her tracks. This light touch leavens the tough subjects she tackles throughout the album, traveling through the (at time bygone era) landscape of the USA, moving from sexual (mis)adventures and restrictive religion to ignorance and cruelty, and the sometimes lonely outpost of being an outsider. But there is also freedom, love, and hope to be found as certain characters she sings about escape their fate and create new lives on the American frontier.

Find out more about Shawna Virago