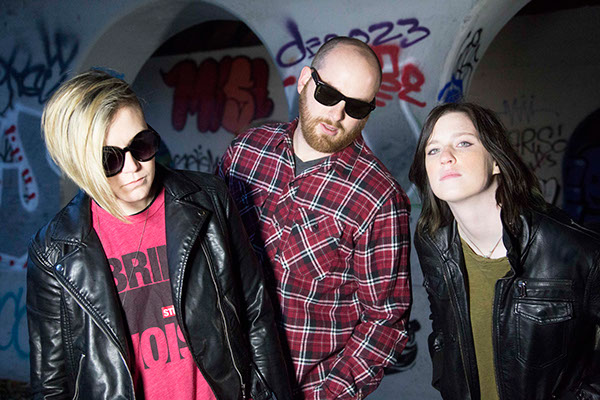 There’s a howl of pure rock and roll howling from the Motor City – and it’s name is MPV.

Not only does MPV ride the storied tradition of classic Detroit rock, but they’re also driven by the sounds of bands like L7, The Breeders, Nirvana, and Sonic Youth.

Add in some unforgettable arrangements, catchy melodies, and spot-on harmonies, and you have a sound that’s raw, rebellious, and always right on.

McCoy was kind enough to take the time to discuss with SEM all things MPV, the band’s magic mixture of the old and the new, and what allows them to hit the sweet spot on all four tracks on In Lust We Trust.

SEM: Thanks, Elise, for talking to us today. How did you meet Val and John and form MPV?

EM: Val and I actually met at 13, when I showed up to her basement to try out for her metal band. We got to be close friends right away and played music together on and off throughout high school. Then, we met John through his sister Kara in 2008. We got together and improvised originally as an instrumental trio, started writing songs, and never really looked back.

SEM: What musical inspirations did you have in common and/or introduce each other to?

EM: The three of us share a lot of the same favorite bands. 90s’ alternative is a huge common thread. We all love Sonic Youth, The Breeders, Pixies, Radiohead, Nirvana, Bikini Kill, PJ Harvey, etc. Val still listens to a lot of metal, too – in case you were wondering.

SEM: Describe the moment when you knew that the three of you would click as a band.

EM: Honestly, it was the very first time that we played together. Val recently described the experience as “effortless,” and I feel the same. John and Val are so solid that I can go absolutely crazy without ruining anything, which makes me feel free to experiment and get weird from time to time. 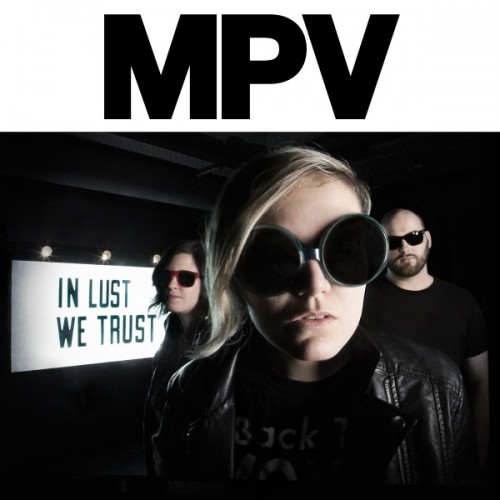 SEM: You seem very proud of your Detroit heritage. How does MPV’s sound reflect the Motor City?

EM: You know, we have played so many of shows over the last seven years in some of the coolest venues in and around Detroit, and we are here releasing records and still playing and loving it. There is something about Detroit that keeps us going. The people keep it going!

SEM: How does MPV fit into the tradition of great Detroit-Ann Arbor bands like The Stooges, MC5, Alice Cooper, and The White Stripes – just to name a few?

EM: We totally respect and draw influence from lots of Detroit bands, old and new. Any band would be happy to carry on Detroit’s tradition for great music, but we also don’t want to sound like anything else. Our goal has always been to stay creative, and we aren’t really trying to fit in, although we have recently dug out a cover from an old Detroit band that we are rehearsing for tour. We’re very excited about it.

SEM: As In Lust We Trust shows, you’re a very versatile guitarist, with the ability to play riff, noise, and pop rock. How did you develop your chops?

EM: I started playing when I was really young. I studied jazz for a bit, but most of my playing on ILWT was from a songwriter’s perspective. I just hear the melodies in my head and do my best to translate them into guitar parts. The songs are most important to me, and I never really aim to be a showy guitarist.

SEM: You’re also a very versatile singer. One minute you sound like Kim Deal, and the next, you sound like Donita Sparks or Kurt Cobain. How do you know when a particular vocal approach is right for a specific song or specific part of a song?

EM: Thank you! I think it’s about knowing how to dial in the right level of emotional intensity, and lyrics have a lot to do with that. My first instincts about vocal approach are usually right on, so I try to get back into that same frame of mind when I’m performing and recording. It’s just about channeling the way I felt when the words first came to me.

SEM: Why did you choose “Mister Sister” as the lead single for the EP?

EM: It was tough because we love each song for different reasons. We talked about it a lot, but “Mister Sister” just seemed right. The three of us wrote the verses and chorus together in 15 minutes on a hot summer day. The opening line is, “I wanna take you to the party,” and it just sounds like the beginning of a new record.

SEM: You go to a very vulnerable place on “In My Dreams.” How did that track come about?

EM: It’s one of those songs that just popped into my head, and I wrote it in about a half hour. It’s about messing up a relationship and feeling horrible for it. It’s about the time that passes afterwards, and feeling out of control. “I can’t say anything to you”… so I wrote a song instead. I do this a lot.

SEM: What can you tell me about Val as a drummer?

EM: Val is probably the most natural drummer I’ve ever met, and she’s also my best friend. She has great instincts and feel behind the kit, and she has killer ideas when we sit down to arrange something. She’s also really amazing to watch on stage!

SEM: What about John as a bassist?

EM: As a person, John is full of energy and so hilarious… never a dull moment with this guy! But when he plays the bass, he just chills. He knows how not to overplay, and he knows when to be fancy. He’s a great writer and a really creative musician.

SEM: How did the three of you develop your vocal blend?

EM: It was only within the last few years that we’ve started really practicing our harmonies. We sound good together, but to get the blend right it takes lots of practice and also good live sound.

SEM: Are there any plans to write and record a full-length?

EM: Yes! We’ve definitely got enough material for it already, and we keep writing songs all the time. I can’t wait to record again.

SEM: What are your plans for live gigs? Is there a tour in the works?

EM: We just got a great van and want to hit the road ASAP. Plans are in the works, and announcements are coming soon.