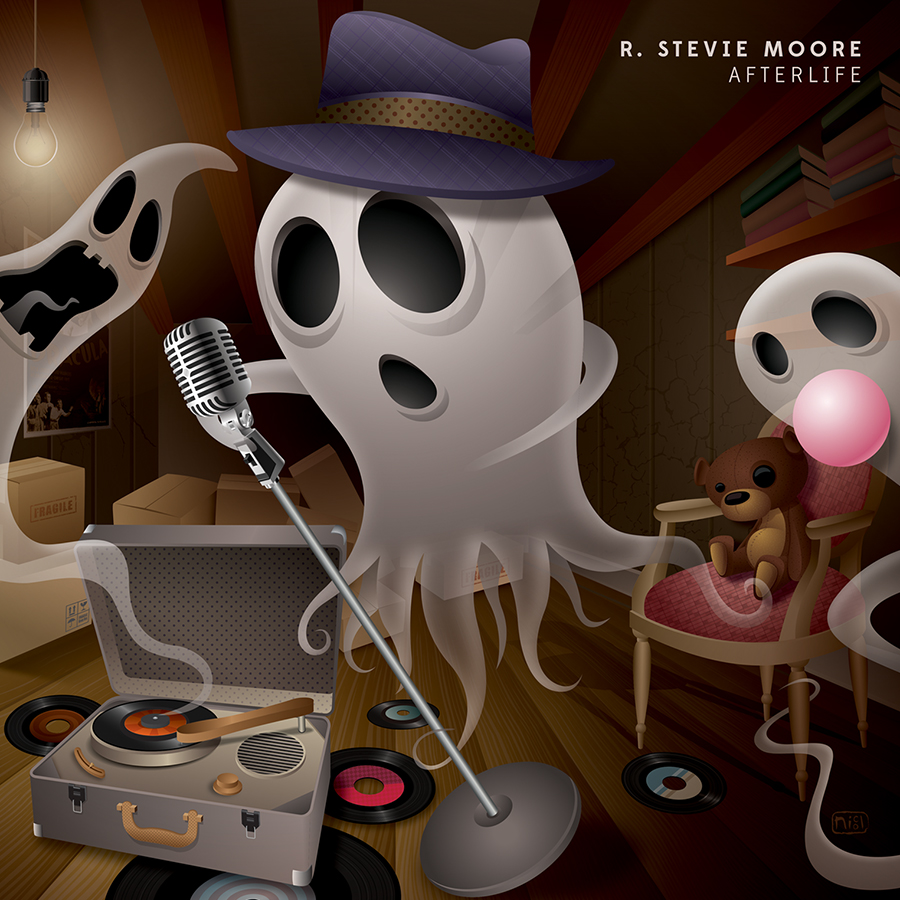 So, alright, look. This is ever-venerable, happily irascible, sadly not immortal R. Stevie Moore we’re dealing with here, whose newest album, the – one presumes – meaningfully titled Afterlife (one never knows with him, of course, but a fair amount of content herein would appear to have been dipped in a skein of existential resin) is at best count his four-hundred-somethingth which, yes, includes collaborations but those account for but a middling percentage. A mundane, overly well-established fact, to be sure, to the point where the guy’s promethean output has become synonymous with his name, appearing with a kneejerk certainty alongside every mention of him (including rather recently by myself in that link above) as if his nearly infinite oeuvre is the form that has become his function.

However, even as I too have just invoked that inescapable aspect of this unparalleled pop auteur, I come not to bury that tired old editorial reflex but rather to use it as an excuse to bypass the typical standards of reviewing because, you see, surely just about anything  that could be said in response to either the sizable artistic presence of the man himself or his work on that vast multitude of spinning objects over the decades, has been said. To think that this could be added to in any substantive way, let alone a way that would stir your purchase-ready loins, is just hubris beyond reckoning. Instead, I propose a Devil’s Dictionary-style approach. All other avenues have a dead-end certainty to them.

Afterlife, n. A corporeal non-starter i.e. doesn’t exist except in the case of infamy and the arts, both of which (aside from being considered by some as synonymous) our dear R might rightly lay claim to but it’s the latter category where the man may claim beyond dispute his badge of immortality.

Irony, n. A quality Mr Moore no doubt possesses in spades but manages to express, musically at least, in such winningly unironic ways that he would appear to be completely free of its grip, which of course he isn’t because what artist the least bit conscious is and ain’t that, indeed, ironic? [also, please note, the title of Afterlife’s first track, full of bright jangly textures and an opening stanza that nods to his father, a topic we’re told, in terms of interview guidelines, is worn-out and therefore off-limits and here we reach a point where irony is swallowing its own tail].

Pop Music, n. The evasively defined mega-meta-concept to which nearly every music that makes us swoon is yoked and that the man with the chiseled-in-pop-monument initials ‘RSM’ is such an incomparable practitioner that, one suspects, even the wheezes attendant to advancing age (something I’m allowed to say as he and I were born on the opposing ends of the first Eisenhower administration) would sound like a concertina version of Oddesey and Oracle [also, please – again – note, the title of track 2 on Afterlife, a pop-rock charmer with a melancholic lilt that pits the sparkly maudlin against a reedy classicism the easy soaring nature of which suggests a lost George Harrison-penned Badfinger track].

Palimpsest, n. A fancy antiquated word for artful recycling whereby a canvas or manuscript has been covered over for the sake of new work only to have the original content leak teasingly through, a word that the work of RSM suggests 1) was born too soon, and 2), in the pop context, has seldom if ever seen its value raised to such an extraordinary level, Moore seamlessly integrating those bleeding-in elements into his songs as if doing so were just a nonchalant shrug of instinct that anyone could do. On that rarefied bed does his legacy lie.

Referents, n., plural What writers often turn to to help readers hone in on the crux of the subject at hand. Often lazy – whopper RIYLs are a sad fact of life – but if judiciously applied and, one hopes, even a little lively, can prove useful and even necessary, like now (not least for those – God forfend – unfamiliar with the ultimate indie originalist R. Stevie Moore). To wit: “Come My Way” is The Monochrome Set covering an obscure gem of a mid-60’s 45 that got spun a handful of times on those table top jukeboxes diners still had then and that now fetches a hundred bucks on Discogs. “What Do I Do With the Rest of My Life” has that mournful/playful duality working for it that places it on the cusp of Roy Wood’s move from the, um, Move to his solo career. With its snappish pluck and elemental new wave cleverness (“sit back, eat up, tune in, retire, impress the memory foam“), “Another Day Slips Away has the dream of XTC in its bones, “Here Comes Summer Again” is more or less a transcription of a dream Brian Wilson had but can’t quite remember upon waking up (as well as being, one guesses, the cut here that made KRAMER smile the most while mastering this album), the breathless “Hurry Up” a primal Devo/”Monster Mash” mash-up while “You Don’t Have to Worry About My Love” – one of Afterlife‘s half-dozen one-man band efforts, the rest with standard accompaniment that includes appearances by Lane Steinberg, Ariel Pink and Jason Falkner – has a Sunday afternoon tea feel to it that places it gently in Ram country.

Influences n. plural Referents’ ancestral roots, manifesting as a sticky ganglia of fleeting synapses and the sparks of emotional residue irradiating to the very core of an artist’s engrammic tissue like the bombarding of neutrinos our bodies absorb every second of every day. While virtually unmappable after a career careening into its sixth decade, it is nonetheless safe to say that for this guy here, this modern Methuselah of melody and hook, those influences’ pedigree – Beatles Rundgren Brill Building on and on – that in lesser hands would ensure pastiche, has in RSM’s resulted in a catalog that defies pop’s accepted laws of gravity. And speaking of laws…

Longevity n. In R. Stevie’s case, a too-soft word for a lifetime of nerve. As a songwriter and performer, he’s adapted Moore’s law to his own purposes, the only difference being, in this Moore’s case, it shows no signs of flattening.