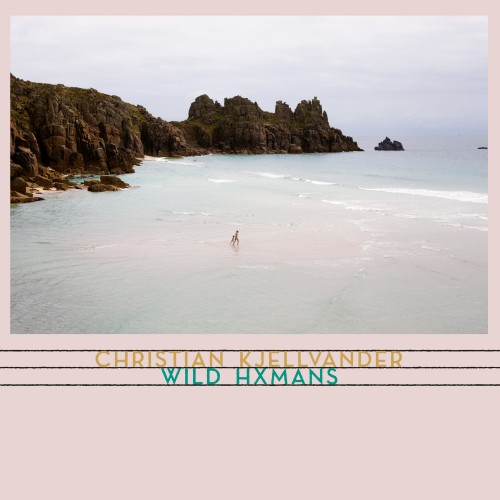 Even considering the rapture endured – and yes that’s an apt twist of phrase in response to Christian Kjellvander’s work – when immersing ourselves in 2016’s A Village/Natural Light, nothing could have prepared us for the second bass note that drops into the mix thirty-nine seconds into the tremblingly bleak new-age landscape that foregrounds “Strangers in Northeim,” this unsettling, necessary album’s opening track. While that note’s placement is, in listening back, the rhythmically expected follow to its softly buried twin ten seconds earlier – and is doubled down on just shy of the minute mark by a two-noter that’s just as noirish, just as isolated (and could well be an orphan saved from “Papa Was A Rolling Stone”) – there’s something ominous enough in the way that one singular pluck hangs in the air as to stagger. At the risk of being too reductive, too fanciful, that one moment could well represent with a speechless eloquence the conflicted character running through Wild Hxmans and, indeed, the haunted aesthetic this artist chases and/or is chased by.

With a backstory rich in tragedy and restless migration (check that link above for the details, considerable even in their basics), the 42-year-old Kjellvander is one of those songwriters whose work-life boundary is porous to say the least, resulting in songs strung by an articulate, always captivating tension. That first track, unspooling like a minimalist epic poem falling apart one line at a time, sprawls with a gripping, slow-motion savagery, not so much via word or deed as by implication, by its seething underlayer of energy. Which isn’t to say the lyrics don’t lay down their own claim, lines like “the road is long, but silence is longer,” cast in Kjellvander’s tensile baritone – a Pacific Northwest Nordic drawl (again, the link above) that sounds not a little like a crystal-eyed Michael Gira raised on a steady diet of John Steinbeck – setting a tone of forlorned existentialism that’s as unmissable as it is transfixing.

In some form or another, on Wild Hxmans, all is foreshadowing, even when held in retrospect or reflection. In “Curtain Maker” it hangs between that hushed acoustic reverb and the words that pass for a chorus that in their pleading essence amount to a desperate prayer for a peace already made unattainable. In the elegiac “Stiegge” it hovers in the lingering shimmer, eyes burning with the nostalgic haze of loss. In “The Thing Is” it arrives with the same expectant tension as would come from opening a family scrapbook to which you already know the fateful ending, while on “Faux Guernica,” with the dark beauty of its Lynchian guitar motif and the Badalamenti synth to match, the future gets its airing from the bare fact that the song concerns a trip Kjellvander took through Spain with his son, a scenario that at its very heart holds the unknowable of what’s to come right up against the inevitability of it coming no matter what, a truth obliquely stressed in the first two sung words: “Riding backwards…”

Now, this might be the place in a review such as this to say some version of ‘Ahh, but not all is sardonic miserablism’ but aside from the glaring truth that what’s under consideration here is far too enduringly beautiful for that sorry M-word, to do so would suggest a need was seen to add in a kind of coddling aspect, a calculation in which the stinging-ness of Kjellvander’s vision would, for the sake of the fragile listener one presumes, be balanced by some more light-hearted fare. And while there are two back-to-back tracks that, due their relatively uptempo structure, do quite noticeably stray from the rest of the record’s ghost-town austerity, neither the fraught, dark skipping tension of “Halle Lay Lu Jah” (home to one of this record’s most standout couplets, “You dabble in it / like children dabble in evil“) nor “Love Xomes” – pronounced ‘Comes’ – a lurking prowl that simmers inside a highly coiled groove like a tune the doomed could dance to, would in any sane person’s estimation be considered a respite. If anything, their exquisite unease, not least in the latter, actually ups the desperado ante that courses throughout, adding to the dawning conviction that, inside these seven songs on Wild Hxmans, the mortal meets the immortal and what results is open to question. Dichotomy rules, they say, and that, quite simply, is the truth.

Let’s leave it at this: Christian Kjellvander is masterful at his craft. That’s something I’d have said as well about Leonard Cohen at the height of his powers – as Kjellvander most surely is at his – but even Cohen didn’t go grabbing after the fire-hot rings of fate time and again in hopes of striking gold. Kjellvander, on the other hand, can’t seem to help it. We owe him for going there, and we owe him for distilling what he finds into albums that are this deeply present in suspense, are this clear, are this fearfully unafraid.

Wild Hxmans is available to stream and purchase from Tapete here.