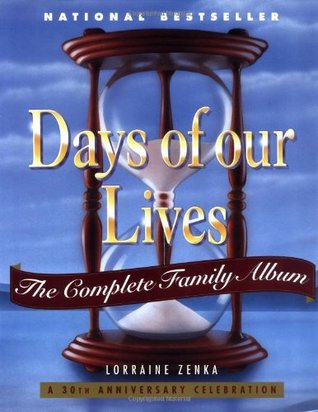 There was something oddly comforting about the theme music of Days of Our Lives.

Was it the chimes that were low at first, and then became higher? Yes.

As forMacDonald Carey’s voice saying: “Like sands through the hourglass, so are the Days of Our Lives.”

Unlike other soaps, Days never changed its theme song to sound more disco-ish or new age-like. It was soothing–like milk and chocolate chip cookies on a rainy day. Pretty soon if we’ll want to hear that theme and watch new episodes of Days, we’re going have to subscribe to Peacock, NBC’s streaming service.

I get teased for my love of soap operas. It started young when my grandmother had her afternoon Kools cigarette and watched the Big Three on CBS: Search for Tomorrow, As the World Turns, and Guiding Light. All three shows had heroines in their mid-fifties and early sixties–and they were my Grandma’s age.

I was a definite Guiding Light girl in the early ’80s and an As The World Turns fan as that decade closed.

But Days had a huge thing going for it around that time: it was aired twice a day. Once at 12 on the Sacramento NBC affiliate, then shown on the San Francisco NBC affiliate at three. Three was huge. This meant when kids/teenagers were getting out of school, Days would be on. You could sit down and watch the show in real-time. Not record it, not watch it when you were sick or on summer vacation. You could watch whatever was going on in Salem that day and get caught up.

My mom started watching during her lunch hour. Her work friends watched it during their lunch break, so she would watch it too. I’d watch it at three, then we would talk about it at dinner. I still loved my CBS shows, but watching Days was handy because everyone in middle/high schools watched Days. They all had their favorite couples but in the ’80s, there was no couple bigger than Bo Brady and Hope Williams.

Their relationship was a trope we’ve seen so many times: A bad boy on a motorcycle falls for a good girl. They fight a lot, but then they realize they’re crazy about each other. On Guiding Light, there was a similar narrative with my all-time favorite soap love story, Beth and Lujack. But in the ’80s, it was Bo and Hope all the way. Peter Reckell (who played Bo) had his picture in many lockers, and when those crazy kids got married in 1985, there was not a dry eye across the country.

Being a rebel, I loved Calliope and Eugene, played by Arlene Sorkin and John De Lancie. Calliope was a quirky fashion designer, and Eugene had psychic visions. Of course, they’d fall in love. Here’s a fun fact: Sorkin inspired Harley Quinn, the Joker’s girlfriend. Use that for your next trivia night.

I also loved the matriarch and patriarch of the Horton family—Alice and Dr. Tom Horton, played by Frances Reid and MacDonald Carey. Often they had to take a backseat to younger cast members’ storylines, but they would always have wise words. Alice would make her delicious doughnuts, while Tom was the Chief of Staff at University Hospital. There was also another heroine of the show, Dr. Marlena Evans (Deidre Hall) who was so popular, that she would be credited at the end with “And starring Deidre Hall as Dr. Marlena Evans.” Marlena was a psychiatrist who could treat all of Salem but had problems with her own love life.

I watched the show off and on for ten years and I finally stopped watching in 1995 when Marlena was possessed by the devil. Now I can handle many storylines: couples getting married several times, characters getting amnesia, baby switching—but I draw the line at devil possession. Still, I tried to keep up with the characters/storylines, kind of like checking a person you knew in high school’s Facebook account.

The storylines became odder and odder. In 2004, Marlena (by then the devil had been exorcised from her) was revealed to be the Salem Stalker, a serial killer who had murdered several of the show’s characters, including sweet Alice with one of her own doughnuts. This was around the time the pictures of torture at Abu Ghraib came out. It was just too much: I couldn’t even read the soap summaries of Days anymore. Soaps were my way of escaping the real world for a little while.

If I wanted senseless violence, I’d turn on the news.

So it wasn’t a surprise on Wednesday when the news hit that Days was heading to Peacock—prior to that, I had heard they were showing a spinoff Beyond Salem and showing past episodes on the streaming network. It’s sad to think that on regular TV at least around 1 in the afternoon, the hourglass will stop spinning. We won’t hear MacDonald Carey’s voice—Carey, by the way, has been dead almost thirty years now—say, Like sands through the hourglass, so are the days of our lives.

No longer will the theme music rise as we settle in to see what will happen in Salem today.

That comfort can’t be replaced.

It will be dearly missed.