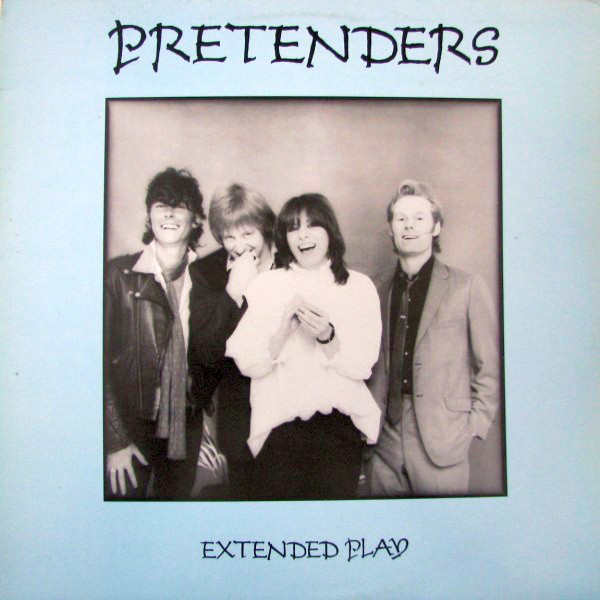 The Pretenders’ Extended Play is my favorite EP.

If nothing else it’s aptly named, comprises five songs. I was in love with Chrissie Hynde when I was in junior high school, which is surprising, since I was mostly listening to the Who, the Doors, and Led Zeppelin Four, along with some Neil Young and a lot of Springsteen (I grew up in New Jersey).

I had the first Pretenders album, which included “Brass in the Pocket” and “Precious,” which I thought was a punk rock song, so I figured I was pretty tough. I was in my first band, White Horse, with a friend of mine from Hebrew School named Alan Licht, who was an amazing guitarist even in seventh grade (and ultimately played with Run On and wrote a book, An Emotional Memoir of Martha Quinn).

We covered some Neil Young songs, “Stairway to Heaven,” “Rosalita,” and “5 to 1.” I had a Jim Morrison fixation back then, and I kept trying to grow my hair out so I would look like him, but my parents kept intervening. White Horse played two gigs that I remember. One was at my Hebrew School – we put up posters around my synagogue – and the other was in Alan’s basement, where we invited some of our friends from junior high school, who were mostly girls. They kept running up to me and screaming and touching me while I was trying to sing. It was kind of annoying. White Horse didn’t last much longer after that. We never covered any Pretenders’ songs. I think it might have been because we couldn’t get the sheet music for them.

I bought Extended Play and immediately fell in love with “Cuban Slide,” which was loose and fun, an echo of the way the Pretenders looked in the black and white photo on the cover of the EP; Chrissie Hynde sort of leaning back and laughing – compared to her straight-ahead-red-leather-jacket stare on the cover of the first album. There’s also a live version of “Precious” on Extended Play. I think it’s from a concert in Central Park in 1979. I still love it that she yells “fuck off!” before the last chorus. She does it on the studio version, but live you get the feeling she means it, and of course the crowd goes wild. “Cuban Slide” has this tremolo guitar sound, and it blends a sort of salsa beat, courtesy of Martin Chambers, still one of my favorite drummers. The guitar is set on some kind of reverb-tremolo-delay, so the song shuffles, rather than drives. It’s also the loosest vocal I’ve ever heard from Chrissie Hynde, especially at the line, “I-yi-yi, wanna dance, but my feet won’t let me.” She sounds like she’s smiling, and it’s a pretty great line coming from one of music’s least danceable bands.

You hear it and you get happy. And I still love her.