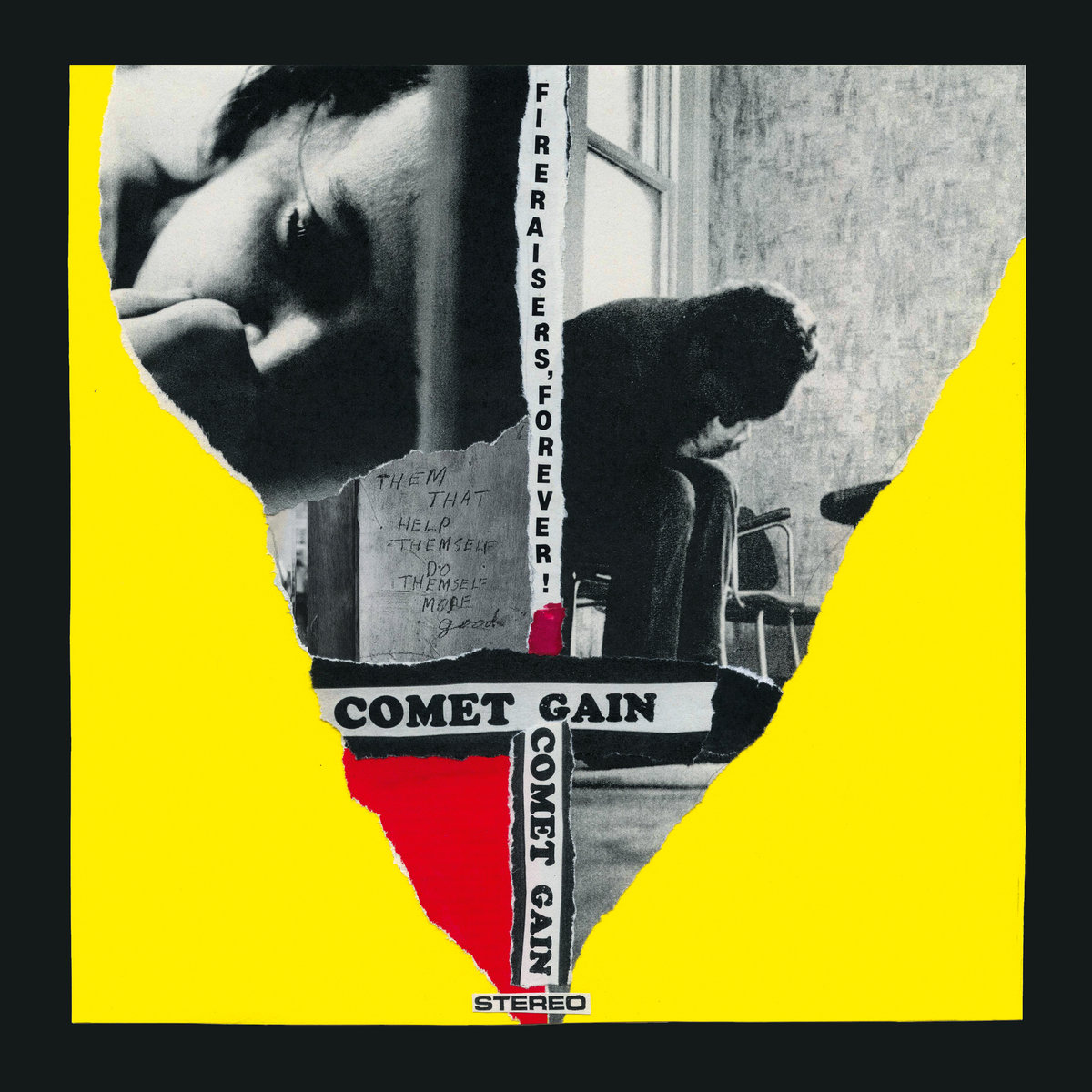 What do you do when you unexpectedly find a copy of a new Comet Gain album in your post box? Well, if you’re anything like yours truly you throw your fisted arms up in the air in uninhibited joy and emit a hallelujah-level YES!! with an exuberance of such volume as to rattle the neighbors’ windows. Largely a reaction that, in terms of adjectives bestirred, runs in almost exact parallel to the visceral response afforded by nearly every one of the band’s previous efforts, it is in turn also one born out of an anticipation that, to the extent it’s even possible, we’ll once again come within listening distance of rock’n’roll’s most fundamental truths, writ not large but instead in a font of pure belief. Without intending to, necessarily (because, really, how could they?), Comet Gain represent what may be the last best hope of everything packed into the still-living, admittedly over-amped and over-simplified concept of ‘rock’n’roll’ that we all still secretly cling to. That may read as OTT but this band, sans artifice, sans pretension, nearly always flirting with the precipice, brilliantly tightly ramshackle (as they say in their self-penned presser “First take beats ethics”), is the type band that spurs reinvestment in just such bursts of rapture.

Returning from the slightly gentler enclave of 2015’s Paperback Ghosts to find the world in some serious need of a good throttling, these same unchanged half-dozen provocateurs – ie Phillipson, Taylor, Christian, Guillain, Evans, and Hornsey – on the opening track of the none-better-titled Fireraisers, Forever! (released by Tapete Oct. 11th) waste zero time dressing down the hopeless morass of selfish pompous boorish incompetence more common referred to as ‘humanity circa 2019.’ Starting out brittle and stark, it’s not long before the brash dynamics pile on and the Rachel Evans-sung “We’re All Fucking Morons” distinguishes itself as a punkish broadside worthy of being mentioned in the same breathless breath with “Oh Bondage! Up Yours!”, just as relentless, just as irresistible, just as necessary. Suitably energized (fired up, you might say) we’re led on another fearless tromp through the radioactive rubble of the Comet Gain mindset. It’s a woolly but worthy, wildly inventive ride that drives toward any number of conclusions the most succinct of which may be that we’ve never needed them more.

Within that need, of course, is the concomitant desire to escape for a minute or three and F,F!, as we might well expect, doesn’t fail to provide, be it the strong hint of glam-o-rama psych garage of “The Girl With the Melted Mind and Her Fear of the Open Door,” “The Godfrey Brothers”‘ wistful breath of aching nostalgia complete with pedal steel and a passing mention of the Notting Hill Record & Tape Exchange, or “Her 33rd Perfect Goodbye”, a paean to scrapbook romance that in its tuneful melancholia suggests a sighing affinity with the latter-day Distractions. But really, here in this moment as we slide toward a collective abyss on multiple fronts, it’s the Gain’s innate seethingness, clad as it so often is in soul-singed stompers just this side of anthemic, passionate in its stinging irreverence, that ultimately punches our ticket.

“Bad Nite at the Mustache” (the song titles alone, as always, making this album purchase-worthy) takes its pensive rage and soothes it – so far as soothing goes – with a chorus tender and vulnerable with the pain, the lyric “to cauterize the wounds, with something like fire, and sunlight, and the magic of love” making it clear that whatever slivers of hope we choose to see are unfortunately jammed beneath our fingernails, “Victor Jara, Finally Found!” reels off its list of martyrs and heroes amid a rollicking pop bomb of a churning indie pub punk chune, “The Institute Debased” premises its acidic commentary on a non-stop acid guitar riff curling with adrenaline, while “Werewolf Jacket,” with Evans at the mic again, aside from being a nugget of a Nuggets out-take at last extracted from the rock-strewn streambed, speaks with a feminist scrawl of indignation to the layer of metaphoric outerwear a woman too often needs just to walk unaccosted through her day.

A fierce fray, then, that’s also as tight as that Unwould tee from back in your snottier skinnier younger days, Fireraisers, Forever! is, in that sense, so Comet Gain. That there’s an edgy uncertainty as to whether it’s ‘anger in the joy’ or ‘joy in the anger’ that we’re celebrating here, well, that too is so Comet Gain. One thing’s for certain, though. No matter if it’s the cutting dexterity of lyric (“lavender boys and thyroid girls” from “Society of Inner Nothing” but a wee sample) or the rickety/confident way they have with both form and function that gets you, know this: you will be gotten. But hey, don’t feel bad, we’re all disciples in the end.