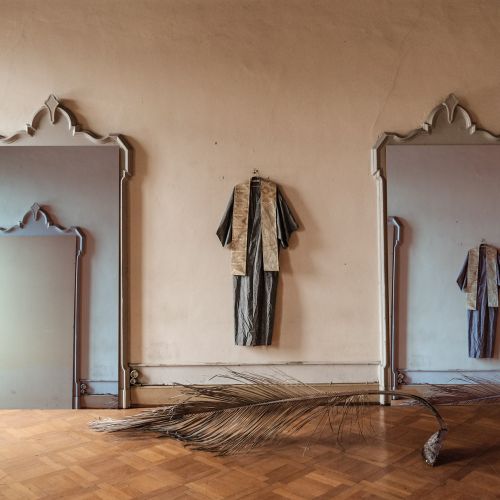 When you’re dealing with an on-the-road band that plays a lot of shows, and they’re super at it, there’s usually a disconnect between their recorded material and how they sound live.

The records tend to lose out and sound like a lesser imitation of the live spectacle. Kush K are super in the live setting. They love to improvise and jam out on their songs in front of an audience, but they also know how to capture their special brand of chemistry in a studio environment.

Lotophagi, their debut album, is a sprawling, eclectic, retro-oriented, lo-fi gem, very much steeped in the sound of the ‘60s.

The LP touches on everything from a dusty type of folk through a more soaring type of mid-‘60s pop, a mild psychedelia, and mixes it all with contemporary lo-fi pop and garage rock.

Despite all of its internal stylistic genre hyper-linking, it’s a very cohesive record. It’s also very timely as far as subject matter is concerned, dealing with the tug-a-war between personal happiness and the welfare of others, at the micro and macro levels; something, which is very much the topic of the day, as far as how we should proceed as a society under the current circumstances, whether it’s the COVID-19 pandemic or the looming specter of global warming.

Catia, the vocalist, songwriter, bandleader, and spokeswoman for Kush K (which also includes Pascal, Paul, and Nicola), kindly took some time to chat about Lotophagi, which is out courtesy of BlauBlau Records is available on vinyl via Bandcamp.

Stereo Embers Magazine: Hello Catia! It’s really good to touch base with you about your new album. So it looks like you’re all big fans of the ‘60s?

Catia: Fans of [the] music. But yeah, you’ll find the authenticity and analog sounds we adore a lot in the ‘60s/’70s.

SEM: If you would compare where we are, currently, with what is now called The Summer of Love, are there any overlaps in the social/cultural system?

Catia: A system change is actually plausible now, more so than ever before, and a lot of people start questioning the structures that we’re living in. But we still have to deal with the idea of the survival of the fittest, which can undermine the communal approach and reveals the self-centered modus in a very unpleasant way. Isn’t someone who’s only looking after their own interests also gambling on the future of others, as well as their own? Under what circumstances is happiness the highest value? What is the greatest luxury? Is there always something or someone suffering for it? We have to ask all these questions.

SEM: Your music sounds very intimate and connected. How did that come about?

Catia: The album was “hand-played” and largely recorded live at a studio, preserving the dynamics of musicians performing together in real time. We like the soft and crisp sound. It draws you into the record a lot more. It’s made for intimacy. Full exposure.

SEM: Why was it important for you to produce your music in this old-school analog way?

Catia: Each sound needs to have a story to feel memorable. Using tape and amps expresses our emotions and the feeling of a song more accurately. It lets us channel the current inside, which connects us to the moment. But we also know artists who are able to tap into this feeling while working on a computer.  It doesn’t matter what your approach is, you should come up with something that resonates, which you know is true.

SEM: Is it fair to say that this record is just a snapshot of these songs? I’m asking because it seems that improvisation is a big part of what you do.

Catia: True. When the moment feels right, it gives every sound a meaning, and it feels more accurate to how you feel the song. We like to play our songs in the mood of the day.

SEM: In light of the current COVID-19 crisis, what are the alternatives to playing live shows? How are you using this extra time?

Catia: Being in music, returning to your natural flow, following your honest intention, finding your daily rituals – Observing your creative curve.

SEM: Have you been writing new songs?

SEM: In closing, what would you say to someone who isn’t dealing with isolation all that well?

Catia: See it as a chance to put this energy – missing someone, loneliness, absence of excitement and challenges – into something new. Work with the things you have, make the best out of your surroundings, or create a fitting surrounding. Plan something. Still try new things, challenge what’s inside you, and question the feelings that come up.

“Think about your heart.

Or is it just uncomfortable?

Think about it some more.

Stop thinking – go for a walk.

Find out more about Kush K: