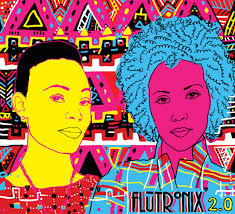 Think ‘Bobbie Humphrey joins a gently retooled Massive Attack’ and then think deeper. Think placid-but-flitteringly-busy clearings in some sunny jungle somewhere transposed upon an urban landscape, the actively serene playing in the mad dash cab traffic along Fifth Avenue. Keep thinking down these seemingly contradictory neural pathways until you come to Flutronix, a soulful (avant)R& (jazzy)B flute duo based in Brooklyn whose second album 2.0 is released next Tuesday, April 8th on their own Flutronix label.

The two women involved, Nathalie Joachim and Allison Loggins-Hull, both graduates of rigorous training programs (Nathalie from the Julliard the the New School, Allison from New York University and SUNY Purchase Conservatory of Music) bring their braided-together talents and career acumen – the pair manage every aspect of this endeavor, from the business to publishing to writing to playing – to a project that’s been turning quickly -swiveled heads (“Who is this?”) and swaying unsuspecting hips since the release of their eponymous debut in 2010. Indeed we here at Stereo Embers challenge you: put this new record on, hit shuffle, and tell us that seduction isn’t everywhere inescapable.

From the luringly downtempo opener “Everything Begins” that’s easy to imagine being plugged into a set by Sasha & Digweed at Berlin’s Love Parade circa 2000 to the layered orientalisms that challenge and delight throughout “Flock” to the complex subtleties that rule “Judge Judy, Judge Jane” – bass and plonked electric piano notes tracing a nimble percussive path on rambunctious tiptoe as Joachim first oohs then awes with a brittle betrayal-brings-empathy lyric, the flute interplay more minimal but just as virtuoso – one’s response, from whatever vantage, be it trip-hop fundamentalist, jazz purist, rave after-party glowstick head or the R&B addict with a smoothness jones (or anyone drawn to contemporary music with a flair for fearless adventure) can hardly help but be fulsome to the point of damn near fawning.

Among Flutronix’ strongest attributes – aside from performance and arranging skills nonpareil – is not only their willingness to inject beatz motifs and other unlikely accents into a jazz-meets-classical-uptown mold but as well making deft collaborative choices while doing so, inviting a select group of luminaries from odd rock corners, from that beat-based world, and from the exprerimental classical world to assist. The duo’s first record was co-produced with Steven Berson (renowned cellist/producer possibly best known for his mastering prowess – credited here with helping out on “She Is”), while this time around Flutronix shares the helm with Tony Maimone of Brooklyn’s Studio G who also happened to be Pere Ubu’s bass player for that band’s first fifteen years or so. The results are nothing short of tantalizing, transfixing with an edge. “Type Writer” surmounts its predictably clacky rhythmic trope to become a busy fluttery piece that marries a nervous energy worthy of Tony Williams to a funky hypnotic bottom end (special mention goes to guest hip-hop drummer Joe Blaxx; ‘sticksman extraordinaire’ would not be overstating the case). “They Ain’t You,” guided by famed hip-hop producer Ski Beatz, is sunny and slinky simultaneously, with the lilting romantic atmospheres of a bright New York City spring afternoon, the flutes in playful cross-patterns, a buoyant swirl of easy energy. Their cover of “Sweet Dreams” brings the pop chestnut down off its gilded, slightly detached perch a bit and lets it dance around like it’s chasing its own tail, the flutes here in relentless frolic, sweetly manic if the truth be told. The most elaborate kudos, though, might have to go to the lengthy closer “She Is,” a breathtakingly circular excursion through an earthly astral plain, one husky flute and a simple patted hand-hit drum creating a stippled Reichian groove that triples down on the tempo while the sister flute flies higher overhead as if calling to the ancients. The piece ends as it began, with Nathalie’s arching haunt of a vocal, like something heard down the length of a lush verdant canyon, early enhanced by the Melodia Womens’ Choir of NYC but alone and lucent in the ether come the end. It’s opus material, a brilliant finale that lingers well into the night.

This is the kind of record that, though you can’t explain it, makes the world a better place simply by virtue of its existence. Its vibrations mount and recede and surge again to flood your senses and certainly the release of endorphins is involved and then the  process repeats in various forms and smiles smile inside your body the way they always will when immersed in work like this, work that so exudes the confidence of beauty. Seek it out, Flutronix’ 2.0, these are some sublime frequencies.