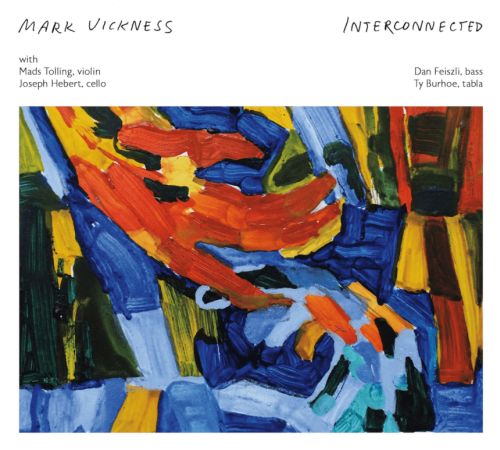 Mark Vickness is a master guitarist and composer who uses the fingerstyle method for playing guitar. He does so with an assured finesse on his latest album that arrived in mid-September.

Aptly titled Interconnected, the four intricate instrumental compositions each link to the other in various ways and showcase Vickness’ prowess as an artistic creator and performer.

The album’s title also speaks to the bigger picture; to our ties with each other as humans, as well as the connections between everything in the universe.

Vickness released his debut solo album, Places, three years ago, and in a few short years he’s made a name for himself in the niche of fingerstyle guitar-playing. On Interconnected, Vickness features on acoustic guitars, and he’s joined by two-time Grammy-winning violinist Mads Tolling, cellist Joseph Hebert, Dan Feiszli on upright bass and electric bass, and tabla player Ty Burhoe.

These five musicians bring to life the instrumental acoustic fusion music on the album’s tracks. Vickness comments, “The ensemble is a perfect vehicle for connecting different styles, eras, and cultures.”

Focusing on Interconnected, Vickness reveals, “The music on this recording is intended to convey interconnectedness; the reality that we live in an interconnected, interdependent world; that we are all one human race.”

Find out more about Mark Vickness