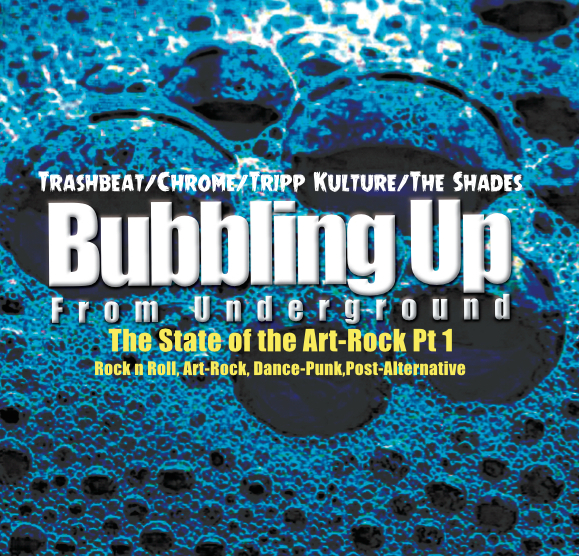 As idiosyncratic planetary busy dudes go, heavy-duty, heavily-in-demand bass player Steve Fishman may qualify as front of the class. The fact that said class, in his case, includes punks and pre-punks and post-space punks and nearly every other breed of high class noise degenerate only upgrades the status of the crazy man standing up there at the blackboard, chalk and bass in hand, all his classmates rapt with attention (and no, no whiteboards and dry erase pens here; we’re talkin’ analog all the way, baby, in spirit if not in fact)

So OK, admittedly, that’s a wack way to begin a review but this debut outing from artist co-op label MAJOR Records, a raucous, wild-haired collaborative romp dressed up as a compilation (it’s a hustle, darling), deserves an entrance that’s at least that errantly extravagant. If anything I was a bit restrained there, showed a bit too much decorum. Even considering its pedigree, its exemplary musicianship, Bubbling Up From the Underground has something of an unleashed quality to it, a salacious gleam in its knowingly decadent eye that recalls all we lived and loved during the glam-slam-tastic mid-to-late 70’s, the slinky shadowy dark dark club-cultured early 80’s, the pre-punk garage aesthetic years, and all those interstitial years spent grooving to boundary-less cross-genre hybrids that had our imaginations out there with our asses on the dance floor (Chrome, after all, is involved here, Fishman having on occasion occupied that band’s bass captain’s chair for a few years now).

In conventional terms – to the extent they can be applied and I’d suggest their use is limited – this is a solo album by a deeply experienced, highly respected bass player (McCartney, Elton, Roy Orbison, and members of the Damned, Blondie, and the Stranglers top a long list of employers and playmates) who’s enlisted a few near-legendary friends to help out. In more accurate terms, the results are laughably beyond this. Yes, the likes of Clem Burke, Helios Creed, Hugh Cornwall and various others dot the landscape here but the vastness of panoramic terrain covered on this album is, aside from the Chrome cut, which is borrowed from last year’s Feel It Like A Scientist, primarily the product of one fervent rocker’s electric neon paintbrush (the tracks do indeed bristle with their own particular pop artist vibrancy), Fishman’s ‘vision,’ if you will, somewhat overshadowing the impact of the invited guests, great as it is to have them along for this thrilling joyride of a record. 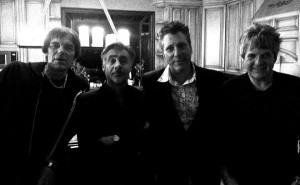 Never once wavering from its compilation ruse, the eleven non-Chrome tracks, interspersed now and again by snippets from the Troggs Tapes and some wicked, unflattering snatches of vitriol from Murry Wilson (“Why don’t you just fucking do what you set out to do?”) are shared by five different ‘bands’ and run some righteously cool gamuts. Opening buzz blast “Cool Me” by The Shades (‘they’re’ only track) is a funk garage amalgam with a lead vocal that embodies equal parts mid-60’s fuzzed-out trash rock 45’s and classic bar band soul, its funk factor ensured by Fishman’s phat, Bootsy-worthy bass shapes, drum monster Shawn Lee’s popping rhythm and some backing vox that are pure sass and allure. Small wonder that work has found favor with the likes of Coldcut and Giles Peterson. Trashbeat and Tripp Kulture both rate four tracks each, the former treading with adroit recklessness through the furrows of 60’s-70’s flavored pop outrage – “Bullet 4 U” is Stooges by way of Death of Samantha that nonetheless has a power pop nightmare vibe; “Hollywood Dream” sounds like a Kim Fowley project auditioning for the part of ‘the band’ on an I Dream of Jeannie episode, Fishman’s vocal dripping with a knowing sleaze, “Come Slumming” could’ve (and should’ve) scored a deliciously cheap switchblade biker gang flick while “Hey Atlas” is “Wild Thing” on seconal, dissolute, resigned, and pretty much the final statement of the heavy American AM radio dream. Tripp Kulture, on the other hand, runs on a whole ‘nother engine.

Moogy, slightly paranoid, and more often than not injected with a krautrocky post-punk dose of industrialized rhythm juice, Tripp Kulture might well be the trophy winners here in terms of individual tracks jumping out and swallowing you whole. “Frozen” would seem to be reconstructing “Final Solution” out of salvaged factory parts and leftover slabs of the Berlin Wall, its undercoating a kind of motorific grunge drone that’s quite possibly what it would sound like to hear the autobahn breathing. Both “Offer” and “Concrete” give a fair approximation of what PiL could have achieved had they paid just a little more attention to Chic, the grooves somehow both sleek and gritty, basslines that trace a path between party-ready and menacing. “Offer” is the livelier of the two, it’s pulse breathless, the vocal phlegmatic, while “Concrete”‘s a bit trippier if just as pulsy, the two tracks definitely brothers of the same disco-funk mutha. The short “Step Into the Future,” on the other hand, has spacier ambitions and is thus far less grounded.

Skimming past the brief paranoia-blip of a 2001 outtake “Off on God” by Japan Sound Ensemble (an “open door” improv project based in Tokyo) we come down an exit ramp to find Hugh Cornwall fronting an ensemble that includes Burke, Carina Round guitarist Tom Livemore and of course Fishman. Adopting the throwaway moniker “Major Collective,” they close this swerving ride of an album with a mesmerizingly trenchant and deliberate outing called “Bloody Lies” that slyly takes all that’s come before and rather neatly synthesizes it into a track the anarcho-dancey nature of which aligns it quite favorably with Pop Group’s Citizen Zombie from earlier this year and you’re right, that’s not a comparison I care to make casually.

An out-of-nowhere record put together by an unfairly obscure musician that regardless is unimpeachably respected by the muso class, Bubbling Up From the Underground ranks as 2015’s shiniest tucked-away gem. The fact it’s presented in a way that mirrors the eccentricity of those involved and especially its ‘compiler’ just makes it that much more of a delight. Before he could even use it, Fishman’s broken the mold here, then went ahead and used it anyway. Marvelous.

[Bubbling Up is available on iTunes and from CD Baby here]