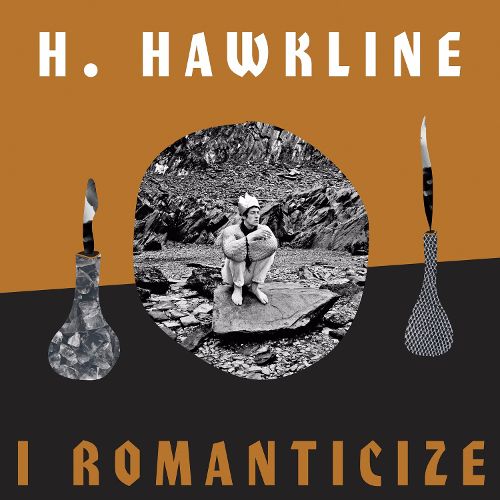 Gotta say I’m getting damned tired of this ‘Where’ve I been?’ business. While there’s little reason I should know of Huw Evans’ Welsh-centric lineage or TV-presenter background, the fact I Romanticize counts as his fourth full-length release amid a catalog that now spans 7 years and includes as well a handful of EPs and a best-of comp, and that he’s the ex-romantic and still-creative partner of this writer’s personally revered Cate Le Bon – the two moved to LA together back in 2013 – should’ve had me trawling the cosmos for everything H. Hawkline but no, due still another cruel injustice at the hands of providence (allaying blame, it’s what I do), it took the almost random fielding of a publicist’s e-mail with attached download to land me at last on the intoxicating (ecstatic, even) Hawkline wavelength.

Arming himself with the light-but-heavy whimsicality of your Hitchcocks and Partridges while mostly echoing, naturally, his Cymru-based colleagues Gruff Rhys and those Gorky’s Zygotic Mynci guys, abetted further by a Field Music-level ability to build shining art-pop constructions with what seems a casual mastery, Evans here has crafted something of a gilded masterpiece. Search as one might (though I’m not certain why one would), there’s not a note misplaced nor, more impressively perhaps for an album with at least passingly baroque intentions, an unnecessary note, effect, inflection or lyric. Lean and exact while being generously a-froth with bounty, I Romanticize is a major work, an under-the-radar record that flies extravagantly – if without fanfare – over the rainbow.

Fittingly, somehow, I can’t think of where to start so will hop – or, to use the verb this album might most prefer, ‘flit’ – about, taking measure of the dartingly unmeasurable. Over here is the cagey toy funk groove of “Engineers” that sounds like the audio equivalent of Edwyn Collins’ adolescent fringe, the singer’s agile tenor brogue, as is its habit here, producing a lilt that is as mischievous as it is downcast. Over there is “Television” that presents for all the world as a, believe it or not, precise stylistic blending of David Byrne and Bryan Ferry and if it’s proof you seek of the darkness often grounding these nominally airy tracks, consult the brief repeat of the line “it’s the shame in your eyes” that sits dead center in this track or the way its primary tagline – “Everybody watch me now” – ends virtually abandoned as the music in all its jauntiness falls away as if losing interest in the star of the show. One can nearly hear the dimming buzz of the existential spotlight fading out. Further down a titch we land on “Salt Cleans” – H.H may have something of an NaCl fixation – with its batty addictive rhythmic structure that resembles the rickety stability of an Object Music relic and its mad adroit rush of words swirling in a kind of paranoid delirium (“I feel the heat of the police everywhere /no more room to cry in the witness stand as the gavel hammers down the judge is here to crack some heads…perfumed egg yolks fry on egg white legs / feel the leaning of the mob…) and that sports pop music’s finest ever vocalized syllable, Evans’ perfectly sarcastic, perfectly exhaled ‘ha!’ at the 1:11 mark, as fine a ‘gets me every time’ moment as we’ve heard in some while.

Speaking of sparkling sentient lyrics that barely mask a breathtaking melancholy…well, pff! They’re everywhere, aren’t they? Our Mr Evans would appear the world’s foremost practitioner of what we might term a droll jollity, but what I meant to reference was gently effervescent opener “Means That Much,” its title derived from chorus couplets such as “I don’t need nobody who means that much to me when / I get all my kicks from sympathy,” but I could just as well point to a line like “watching lovers cross the street / the pavements never meeting their feet” (“Last Days in the Factory”), all of it matched stride by stride by subliminally challenging minor keyed arrangements that prop up all this verbal chicanery with a sinister delicacy, often feeling simultaneously precious and vaguely nightmarish, as if sprinkled with equal amounts pixie- and angel-dust (“Cold Cuts” with its hounded syncopation and from which comes the album’s title – “every hour I romanticize / pressed against the glass of every stranger’s eyes” – is a succinct example should you still need one).

A brash insouciance baked into an oddly-shaped souffle of genius and not a little like a more acerbic Anonhi that’s found a way to be ironic and irony-free at the very same time, Huw Evans in the guise of H. Hawkline is our newest legend. He may not know that yet, but now at least you do.